Once again, we are locked down. And migrant workers are leaving out of fear of being abandoned. How did we get here? 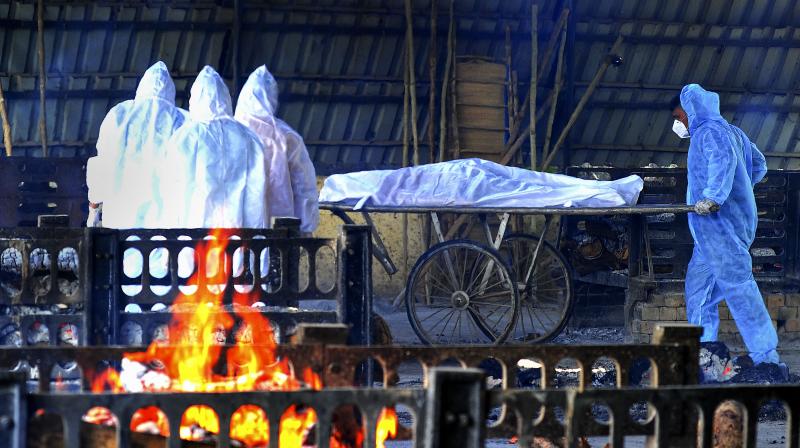 India now has the world’s fastest-growing Covid-19 caseload, adding more than 250,000 new infections every day for the past week or so. (Photo: PTI)

The fear is back. The images on television, the gut-wrenching stories of death, devastation, despair and a gnawing sense of helplessness evoke an eerie feeling of déjà vu — one has been down this road before.

New Delhi’s cremation and burial grounds are changing. Nigambodh Ghat, one of the largest cremation grounds in the city, has stepped up its capacity from 36 to 63 pyres to accommodate the swelling numbers of the dead. More than one year into the coronavirus pandemic, ordinary Indians are once again flooding the social media to save the lives of their loved ones. They are turning to strangers for help as they grapple with acute shortages of medical oxygen, ventilators, and hospital beds that offer intensive care for Covid-19 patients.

Once again, we are locked down. And migrant workers are leaving out of fear of being abandoned. How did we get here? What does this tell us about our pandemic preparedness and the lessons not learnt?

The oxygen crisis comes as Delhi, and the country, faces a terrifying spike in new coronavirus infections and deaths, signalling a second wave of Covid-19. India now has the world’s fastest-growing Covid-19 caseload, adding more than 250,000 new infections every day for the past week or so.

The total tally of Covid-19 cases in the country has crossed 15 million; the death toll is over 1,80,530 and there is worrying news about new mutants of the virus, including B.1.167, an Indian-origin double mutant strain of the coronavirus that some experts say could be behind the dramatic surge in new infections.

Arguably, this year, some of us are a little better prepared. Some of the recent steps taken by the government are steps forward. We have the vaccine — three, in fact now, to combat the new coronavirus. The Centre has just given the green signal for vaccinations to be open to all above 18 from May 1. We have a little better health infrastructure in some parts of the country, and we are better equipped in areas like personal protective equipment, compared to the early days of the pandemic last year.

As Gautam Menon, professor in the departments of physics and biology at Ashoka University, who has a long-standing interest in the modelling of infectious diseases, puts it: “Opening up vaccines is a genuine step forward, supporting Serum Institute of India and Bharat Biotech in ramping up production is a good idea and expanding vaccinations to anyone above 18 is a good step.”

But many of us remain ill-prepared. On many fronts, we don’t seem to have learnt any lessons. The second wave is hammering us because both the political class and the people lowered their guard.

We forgot that mixed messaging never works in public health.  While official advisories continue to extol the virtues of Covid-appropriate behaviour, large religious gatherings like the Kumbh Mela and multi-phase state elections were allowed. Politicians, cutting across party lines, have been addressing huge rallies. Ministers without masks have addressed crowds. Ordinary people took the cue. Late last year, when infections were going down, there were parties, weddings. birthday celebrations.

Now, the virus has struck back with a vengeance. We never learnt things can get progressively worse in a pandemic, that we can’t afford to assume a best-case scenario and go slow on contingency planning, and most important, that openness and data transparency are musts.

Take the case of medical oxygen, critical for Covid-19 patients whose condition becomes serious. As is amply clear, India is ill-prepared on this front. Faced with a sharp spike in Covid cases and the soaring demand for medical oxygen, the Centre has banned the supply of oxygen for industrial purposes except in nine specified areas.

But what was the extent of preparations for this eventuality over the past year? In October, the government took a decision to install oxygen-generating plants on-site in 162 government hospitals across India to support Covid-19 treatment. Funds were sanctioned early this year but according to one recent media report, only 33 such plants have come up so far. Meanwhile, states jostle for depleting medical oxygen reserves.

The oxygen crisis is not just about increasing capacity but also transport. Availability of oxygen is also about enough cryogenic (tank) trucks, cylinders, refilling facilities and so on. But India is ill-equipped on this front too. Saket Tiku, All India Industrial Gas Manufacturers Association president, says that while it is possible to ramp up oxygen output, there is the issue about not having an adequate number of trucks for oxygen transportation.

Take the issue of genomic sequencing and information about the new mutants. There is not enough data on the subject in the public domain and we don’t know how many samples in India have shown the so-called double mutation (B.1.617). Recent media reports suggest that the double mutant was first detected last October through genome sequencing of a virus sample. However, the genome sequencing exercise has been running at a slow pace. Not enough resources appear to have been invested in it. The sluggish pace could be due to complacency because of the steadily falling Covid-19 curve at the end of 2020.

As Prof. Menon points out: “Getting adequate genomic sequencing in place was actually crucial and should have been well in place by December.” There are other lessons we have not learnt. Last year, migrant workers walked down highways in a desperate attempt to get back to their villages hundreds of miles away as the nationwide lockdown kicked in.

As Covid cases spike, and several states announce a slew of restrictions including night curfews and weekend lockdowns, migrant workers are, once again, staring at an uncertain future.

A parliamentary standing committee report has recommended that the government should ensure a decent minimum wage, food security and safe living conditions to all workers employed in both the formal and informal sector by including them in health services, cash transfers and other social programmes. The committee also suggested the launch of a national database on migrant workers as it will help in the identification of migrant workers and in delivering ration and other benefits to them.

Nothing much has moved on the ground till date. And migrant workers are boarding buses and trains to get back to their villages. Much of this could have been avoided. There must be mechanisms which enable the government to listen to and incorporate independent voices in its decision making.