Opinion   Columnists  24 Sep 2022  Manish Tewari | What India can do to end the Ukraine war
Opinion, Columnists

The world must, therefore, urgently push Russia to negotiate and accept the fact that Ukraine is, after all, a sovereign nation 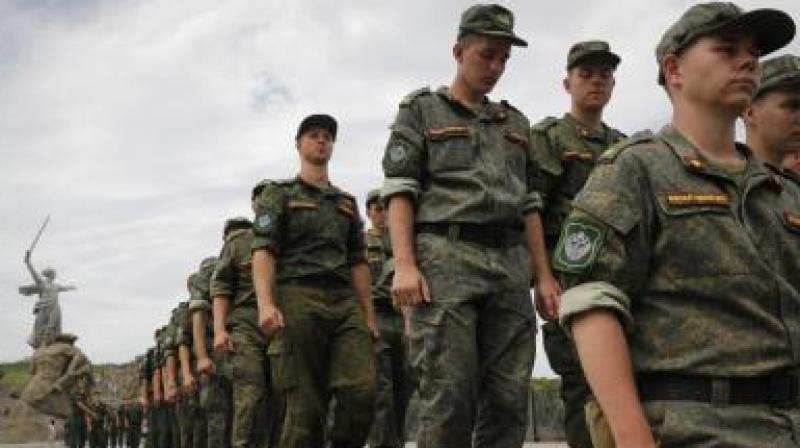 File photo of Russian army soldiers marching during an action in support for the soldiers involved in the military operation in Ukraine. (Photo: AP)

On the 5th of April earlier this year, while leading the debate on the Russia-Ukraine crisis in the Lok Sabha, I had prophesied that the aggression unleashed on February 24, 2022, by Moscow on Kyiv may not end well for the former.

With referendums now being conducted in Russian occupied areas the self-styled Donetsk (DPR) and the Luhansk People’s Republics (LPR), which Russia recognised as independent just before the aggression and Russian-installed administrations in the Kherson and Zaporizhzhia regions to legitimise an illegal occupation, these seemingly farcical exercises in democratic expression are  comical if they would not have been tragic.

The announcement of partial mobilisation through conscription that has created consternation among young people in Russia after Ukraine took back 9,000 square kilometres of its territory in the south and northeastern blitzkrieg in the Kharkiv region the war could truly be at an inflection point.

Russia on the backfoot?

The recent Ukrainian offensives have taken back Kupyansk, an important rail head, and Izium, a major logistics base for the Russians. The Russians had to pull back thousands of troops from the Kharkiv region. The Russian response to these reverses is predictable: “We are moving troops from these areas to  reinforce our operations in Donbas.”

A similar justification was trotted out for withdrawing forces from Kyiv earlier. Ukraine's gains have surprised most. Yet, many had predicted this would happen. Even with an overwhelming superiority in weapons and ammunition, Russian troops do not seem to be sufficiently blooded in combat except for their elite troops and militias of the Chechen strongman Ramzan Kadyrov.

The mandarins in the Kremlin want to model themselves on Peter the Great — known for his expansionist wars in the 18th century. To buttress this self image rhetoric has been deployed that harks back to “reclaiming” lost lands and past glory.

The war in Ukraine is thus seen by Kremlin not as a war, but a mere “military operation” to reclaim what belongs to Russia. In their vision, Ukrainians, Russians and Belarusians are but one people, a Slavic nation stretching back to the time of Kievan Rus. However, Ukraine and even Belarus for that matter have a different perspective about both their history and sovereignty. Unfortunately, the Russian vision of the Slavic lands precludes it from acknowledging Ukrainian sovereignty. Ukraine must be kept under Russian influence, come what may.

These ambitions in Ukraine tie up with the overarching goal of making Russia a pre-eminent Eurasian power. A position that it still believes it currently occupies but feels threatened by Nato’s eastward expansion. In fact, it is no stretch to argue that the casus belli for the current crisis was Russia’s apprehensions  about  Ukraine joining Nato, though that process is itself both convoluted and time consuming and Moscow is well aware that between an expression of intent and actual membership there is a considerable time lag.

Undoubtedly Nato’s three-wave expansion since the collapse of the erstwhile Soviet Union in 1991 has tried to whittle down  Russia’s sphere of influence, especially in its near abroad. It sees Nato as a tool for the United States and its allies to continue dominating Europe. This narrative regarding Nato has been critical in Russia’s war rhetoric and in its claims that it had no choice but to violate Ukraine’s territorial sovereignty in order to prevent Nato from coming to its borders. However Moscow miscalculated on how the West would respond?

For, Russia has achieved the exact opposite of what it set out to do. With war fatigue plaguing the US and much of Europe after the two-decade involvement in Iraq, Afghanistan and the broader Middle East and North Africa, Western foreign policy was seemingly in disarray. But Russian actions in Ukraine precipitated a robust response that has consolidated Nato like never before.

Initially, there was cynicism that the West was planning to fight Russia to the last Ukrainian. However Ukraine’s resilience and capacity to resist, consolidate and assault has surprised even a lot of analysts whose sympathies lay with the Ukrainians in the first place. The US has so far given $12.5 billion in military aid while Poland, UK, Canada, Germany. Australia, and Denmark are among the other large donors.

The M-142 High Mobility Artillery Rocket System or Himars sent by the US have been crucial to beating back Russian troops. Similarly, anti-tank weapons, drones, missile systems, and tanks supplied by different Western countries are a testament to how Russia’s offensive has led to the opposite of what Russia set out to achieve.

In the din of strategic affairs and geopolitical considerations, however, one must not forget the larger humanitarian issues in Ukraine. Hundreds of people have been killed and buried in forest graves in Izium, a town now recaptured by Ukrainian forces. There are calls for an investigation into alleged war crimes committed by Russian troops in that town. These allegations follow earlier horrors in Bucha. The European Union has called for a war crimes tribunal to be set up, à la Yugoslavia. Attacks on critical infrastructure and power plants have rendered Ukrainians vulnerable to a harsh winter. And if Russia ends up controlling Odessa and other Black Sea ports, Ukrainians are only looking at further discomfiture.

The world must, therefore, urgently push Russia to negotiate and accept the fact that Ukraine is, after all, a sovereign nation. Ukraine’s recent territorial gains, even if ephemeral, should mellow the Kremlin a little bit. In this context, India has a critical role to play. While, undoubtedly, Russia has been an all-weather friend to us, we have also grown closer to the West over the past two decades with a multitude of military and economic agreements. It, therefore, is incumbent on India as a multi-aligned power not to  tell our Russian friends that  they were  in the wrong when they transgressed into Ukraine. If reports about what Prime Minister Narendra Modi ostensibly told President Vladimir Putin that this is not the era of war are correct then the candour is indeed refreshing.

The recent Shanghai Cooperation Organisation (SCO) summit in Samarkand was, therefore, another great opportunity for India to help arbitrate in the issue and make clear its position. Indeed, the difference in Mr Putin’s response to German Chancellor Olaf Scholtz and to Prime Minister Modi could not have been starker. Mr Putin ostensibly told Mr Scholtz that the war in Ukraine was not a mistake. By contrast, he told Mr Modi that he wants the war to come to an end. There is, therefore, much that India can do to help persuade Russia to negotiate a settlement and end this pointless loss of human lives.