Covid-19: A glimmer of hope as recoveries rise

The difference between the fatalities and recoveries is huge, and gives rise to more than a glimmer of hope 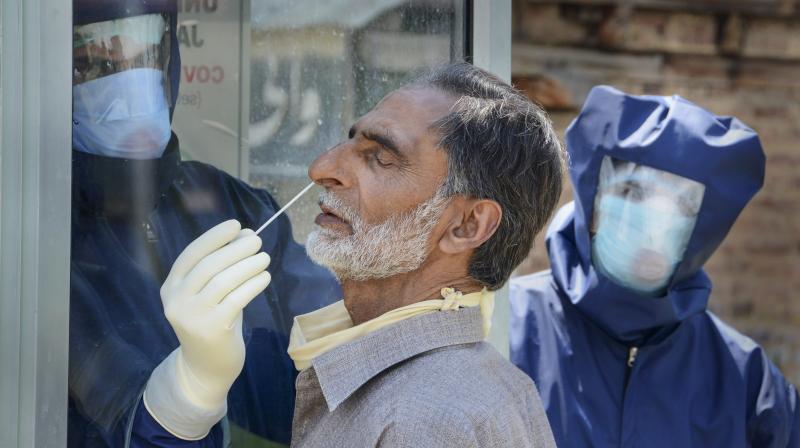 What we need are strategies for coping with Covid-19 and they need not be drastic ones like the national lockdowns, or even large-scale quarantining. PTI Photo

Generally, the focus has been on the first and the last figures, that is the total number of those who tested positive and of those who died.  And it is justified. But those two figures do not tell the whole story of the coronavirus pandemic. The second and third categories, that of active cases and of those who recovered from the virus, form an important part of the story. They show that not all who test positive fall sick, and though the difference between the two are not wide enough, they remain significant.  This is not a desperate attempt to look for the silver lining in an acutely grey landscape.

Worldwide, the confirmed cases on Saturday evening were 28,28, 772 and total deaths were 1,97, 924. The figure for those who recovered stands at 7,98,762. The difference between the fatalities and recoveries is huge, and gives rise to more than a glimmer of hope.

But the total picture is that the number of who are recovering from Covid-19 is far ahead of those who are dying. This does not mean that Covid-19 is beating a hasty retreat and that sooner than later, we can declare victory over the virus as the politicians and others would like to believe. The sober conclusion of medical experts is that the virus is not going away anytime soon, that we will have to learn to live with Sars-CoV-2, which is the accurate label for Covid-19, and that it is likely to return. The probable vaccine is months, if not a year, away. But as we get used to the idea of living with Covid-19, it will be helpful to look at the Covid-19 ledger, and realise that those who recover from the viral infection is much higher than those who succumb to it, and it is now recognised that among those who have died of Covid-19, the cause was usually due to underlying chronic and other morbid or co-morbid conditions. It is more likely that you will survive a Covid-19 attack than that you will not. It cannot be forgotten that for the families of those who have lost loved ones to Covid-19, the fatality rate, whether small or big, is a brute fact. But we are forced to look at the figure to grapple with the deathly phenomenon of the pandemic.

It is only by grasping the epidemiological dimensions of Covid-19 that governments, medical experts and people can come to grips with it. Governments were worried that if the pandemic became too huge, they would not be able to handle because of the limited resources of the public healthcare system. Doctors and researchers were petrified that they have no means to deal with Covid-19 in the absence of a vaccine. The people were confused and frightened when governments and doctors appeared to be helpless. The way out of the pandemic is to make sense of the numbers. The numbers say that huge populations will get infected, but not all of them will fall sick, and even when a large majority do the symptoms could be moderate and the number of people slipping into the critical stage would be limited. And the only way to get a hang of this is to look at the numbers closely. They make for grim reading, no doubt. But they do not spell doom without end and hope.

What we need are strategies for coping with Covid-19 and they need not be drastic ones like the national lockdowns, or even large-scale quarantining. For a majority with moderate symptoms, there is no need for hospitalisation. Family members may test positive, and some of them may even be infected. But with proper medical advice they can manage quite well at home. Doctors must speak out clearly how Covid-19 may be managed so that the really critical patients can receive the care they need at hospitals.

At the end of it, etiology of the patients who recovered as well as those who have failed should form the database of how to deal with the virus when it goes viral. The clues for the chinks in the virus can only be found as the virus spreads inside the body and how the body responds. Different populations are responding differently, and there is need for an India-specific epidemiological study based on clinical evidence. This is not necessarily based on a racial profile. The German response has been like that of the Indian experience, low fatality and greater recovery rates as a proportion of the total confirmed cases. There is need for an army of clinical data collectors in each country and it should be made accessible. The Chinese need to do this, and India can show the way.