Gujarat, is not a cakewalk for either the BJP or Mr Modi, and the PM is also keen to prove that he remains unbeaten on his home ground 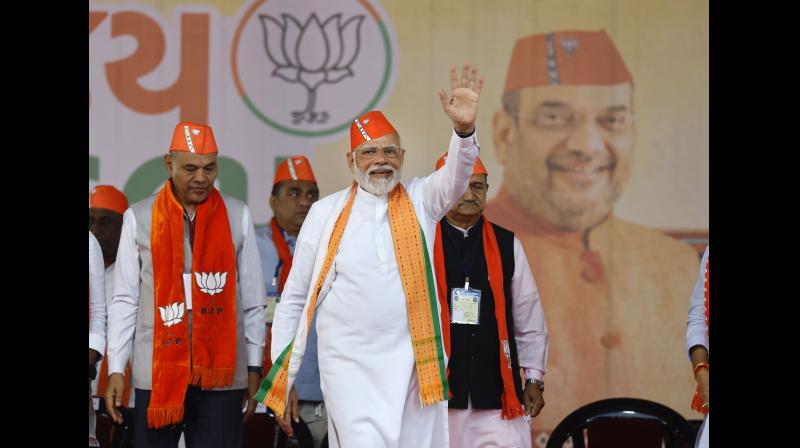 File photo of Prime Minister and senior BJP leader Narendra Modi waving at supporters at a public meeting ahead of the Gujarat Assembly elections, in Kheda district. (Photo: PTI)

The relentless campaigning by Prime Minister Narendra Modi and Union home minister Amit Shah for the coming Gujarat Assembly polls either reveals the seriousness with which these two leaders take the challenge of every election, or it shows even after all these years in power -- over a quarter-century -- they are still not confident about the support of Gujarat’s voters despite the self-proclaimed good work done in the state. This is but a mild paradox in the now discernible Modi-Shah political style, taking nothing for granted and fighting every inch of the way with earnestness. The belligerence and animosity that they seem to breathe into the air in the course of their stump speeches is par for the course. But there is another curious factor about Gujarat Assembly elections, especially from 2002, when Mr Modi fought his first election as state chief minister. Observers and critics see it as a referendum on his polarised, and communalised, politics, especially in the 2002 contest, immediately after the Hindu-Muslim riots of February-March that year in the wake of burning of the railway coach at Godhra and the death of 57 VHP volunteers returning from Ayodhya.

Mr Modi had also sensed that victory in Gujarat is the litmus test of his politics. He saw the election victory as an endorsement of his Hindutva politics. It’s not surprising then that in this campaign as well, Mr Shah blamed the Congress for the series of Hindu-Muslim riots in the state, and he said the rioters of 2002 were punished, with the implication that the rioters dare not raise their head again. The irony is that the rioters in 2002 were Hindu mobs who killed Muslims and ransacked their homes and shops. If Mr Shah were to admit Hindu rioters were punished, he may lose his Hindu vote. But it’s evident that in the BJP’s demonology, it is the Muslims who are the troublemakers, a view expressed even by the liberal among the Hindu right-wingers, Atal Behari Vajpayee.

What appeals to the Hindu voter in Gujarat and also elsewhere is that the BJP under the leadership of Mr Modi deals with Muslim troublemakers with a strong hand. That is why, even in the 2020 Delhi riots at the end of February that year, when then US President Donald Trump was on a visit to Ahmedabad, Mr Shah said that the rioters came from Uttar Pradesh, and the needle pointed to Muslims. So, Gujarat has a special place for Mr Modi’s political journey, and it is one place he would not want to lose ever. If there were to be an electoral setback in Gujarat, it would be construed as a defeat of the Modi brand of politics.

The media narrative of the Gujarat Assembly elections has followed that of Mr Modi. The media felt that Mr Modi’s victory in Gujarat heralds his success on the national stage. That’s why the Gujarat Assembly elections are as important as the Uttar Pradesh polls. The testing ground for the BJP’s polarised politics behind the smokescreen of rapid modernisation and development turns out to be Gujarat and Uttar Pradesh. Gujarat is a ratification for Mr Modi and UP for the BJP as a whole. So, the Assembly elections in these two states assume national significance for the political soothsayers much beyond the importance of the two states. Local issues get overshadowed. It does not matter that UP remains a backward state in more ways than one despite the loud claims of Mr Modi and UP chief minister Yogi Adityanath. Gujarat remains a moderately prosperous state because it is a small state, and its economic achievements under Mr Modi from 2002 to 2013 was less than impressive because Karnataka, which is comparable to Gujarat in population size, has done as well as Gujarat in growth rates. Gujarat lags behind Maharashtra and Tamil Nadu in terms of industrialisation and in GDP size for obvious reasons. Both Maharashtra and Tamil Nadu are far bigger in size than Gujarat. Gujarat is no Singapore, which shows an explosive economic growth. The myth of Mr Modi’s Gujarat model of development has been insidiously nurtured by pseudo-economists in Delhi who have been rewarded by the Narendra Modi government after 2014.

Gujarat, therefore, is not a cakewalk for either the BJP or Mr Modi, and the Prime Minister is also keen to prove that he remains unbeaten on his home ground, Gujarat, though he has shifted his parliamentary base to Varanasi, Uttar Pradesh. It also shows that India is not yet a polarised polity as it may appear to be. The number of Hindus voting against the BJP and Mr Modi is larger than those voting for him. The BJP and BJP-watchers may have to revise their view about the success of Hindutva.