Some of those who rose through the professional ranks retained their connections, however vague, with the “black” communities of Britain 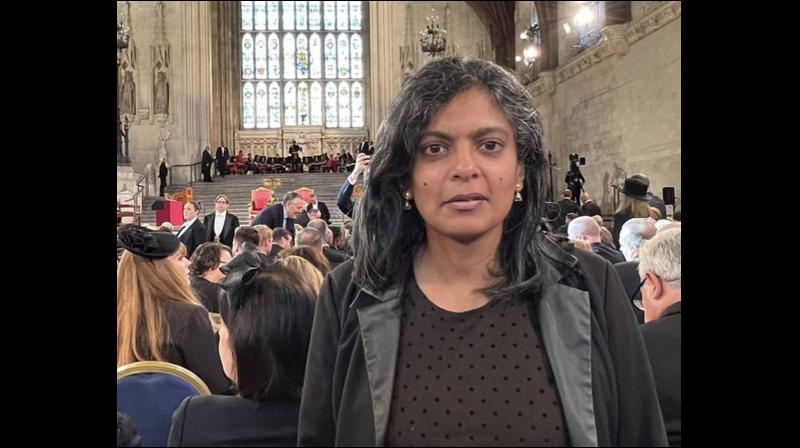 “O Bachchoo, why this perpetual debt
Of love, loyalty or money
The people you owe to seem all bereft
Of humorous sense, they don’t think it funny
That life is perpetually owing what to whom
Until the end, the ultimate broom…”

From Yeh Yeh Milan, by Bachchoo

A British Labour MP called Rupa Huq, who represents West London’s Ealing and Acton, has been suspended by her party for saying at a fringe meeting at Labour’s annual conference that Tory chancellor of the exchequer Kwasi Kwarteng was “superficially black”. I could say “all hell broke loose” but I won’t, as I’ve never understood the phrase -- was hell tied down? Was hell a reined-in animal? Was Dante unaware of this harness? -- So many questions, yaar….

What did happen was that Labour leader Sir Keir Starmer immediately suspended her from the party, pending an inquiry, and several eminent Labour personalities gave sound bites to the media saying her remarks were “racist” and no form of racism would be tolerated in the Labour Party. They demanded that Ms Huq apologies to the Tory chancellor.

Poor Rupa read the writing on the TV prompter screen and issued grovelling apologies to Kamikwazi Kwarteng saying that her remarks were ill-judged. She could do no other if she wanted to stay in the party and even perhaps keep her seat.

The reason she was forced to do this is the current ethical stance of Labour, which opened its annual conference for the first time in more than a hundred years with the national anthem “God save the King”. Sir Keir Starmer’s party presents itself as everything traditionally British, as it calculates that British voters will only give a majority to a thoroughly patriotic party. This stance entails the adoption of the mythical British values of fair play and good sportsmanship, involving the prohibition of below-the-belt attacks on your opponents.

Now, gentle reader, I am not a Labour MP or even a member of the Labour Party and have thus fearlessly, in past editions of this very column, referred to the multi-ethnic governing bodies appointed by the previous PM, BoJo, and the current one Liz Truss, as “Uncle Tom’s Cabinet”.

BoJo’s Cabinet boasted several ethnic members. There were the two successive chancellors, Sajid Javid and Rishi Sunak. There was the person of Ugandan Gujarati descent, Priti “Clueless” Patel. There was Suella Braverman, a person of Goan and South Indian descent, Kemi Badenoch with Nigerian parentage, Alok Sharma… yes, and some more.

And now Liz “Trussed-by-the threats-of-her-own-petard” (with little or no regard) has appointed Kamikwazi Kwarteng as her chancellor.

Kamikwazi is an old Etonian and last week issued his mini-budget! It gave billions of pounds to the one per cent rich and pushed the bottom 25 per cent of the population into a deeper cost-of-living crisis. His parents came from Ghana and, as to the shade of his skin -- there is no dispute.

But the word “black” over the last seven decades in Britain, and before that in the United States, has not been used exclusively to denote the colour of one’s skin. The word has, from its initial militant political use by Malcolm X in America and then the Black Panther Movement and others in the UK, been a term for the oppressed classes of people of some ethnic origin.

Malcolm X had said he included Latino immigrants in the term.

I was a member of the British Black Panther Movement (BPM) because “black” was a convenient metaphorical adjective for the ex-colonial populations from the Caribbean, from the Indian sub-continent and from Africa who had arrived as immigrants to the UK and were in the main (not myself, who joined as a victim of social racism) workers in the lower rungs of the industrial and service economy -- work that the white working class had abandoned.

It was organisations like BPM and very many agitational organisations who fought, through every means of challenge, the status quo and the state, for equality and an end to discrimination in every facet, sector and institution of the nation. The victories, big and small, of this agitational approach by these organisations and formations assured at least one thing -- that ethnic individuals could rise through the meritocracy of Britain.

Some of those who rose through the professional ranks retained their connections, however vague, with the “black” communities of Britain.

Though significant progress has been made over the last seven decades of ex-colonial immigrant settlement in Britain, the new communities are in no sense completely absorbed into the economic and employment structures of the nation. “Black” as a political term still applies to these new communities even if the organisations that called themselves politically black have given way to other evolved formations.

The “black” organisations which adopted the term and represented these lowest sectors of the working class would never identify with a chancellor, whatever his skin colour, whose first move was to give tax breaks to the very rich and cause the pound’s exchange rate to fall to $1.03, raising interest rates and the price of food, clothes and shelter -- not to mention fuel -- to levels unaffordable by the poor.

So let me be bold and say that not only Kamikwazi Kwarteng, but the other appointees of the present Cabinet such as Suella Braverman, Kemi Badenoch, James Cleverly and Alok Sharma may boast ethnic descent but they are, as Rupa Huq would say, “superficially black”.