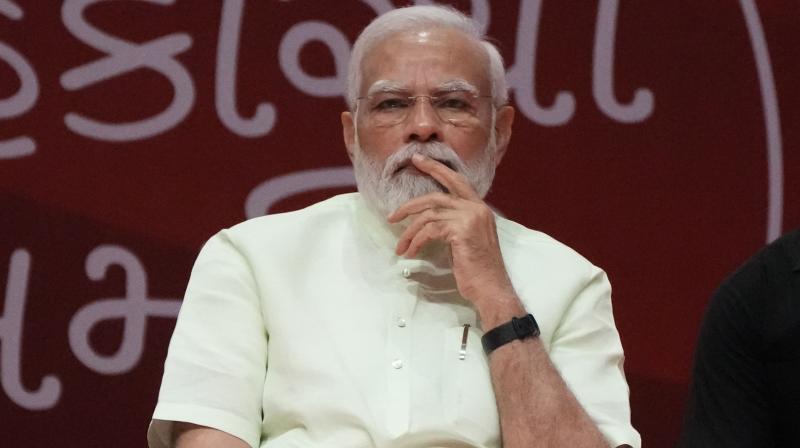 Prime Minister Narendra Modi has mooted a “Sneha Yatra”, a massive public outreach programme, to connect with the minority communities, especially the poor among the Muslims and Christians, by the BJP to win them over to the party’s side. Mr Modi made the suggestion while speaking at the national executive meet of the BJP, which was in session in Hyderabad on Saturday and Sunday.

The Prime Minister has banked on the party’s surprise win in the byelections to the Lok Sabha constituencies Azamgarh and Rampur in Uttar Pradesh to drive home the point that it is possible to win the confidence of the minority communities. The Muslim-dominated constituencies chose to dump the Samajwadi Party which they have been supporting most of the time and chose the BJP instead because of the development programmes of the Union and state governments, according to the BJP narrative.

Mr Modi would attribute the ‘misconceptions’ about the party’s approach towards minorities to Opposition propaganda and wants the party to convey the point that it is not against any religion. The UP model could be emulated elsewhere, according to Mr Modi, as the party has got the backing of the extremely backward sections in the Muslim community there.

The Prime Minister would also want party leaders from northeastern states to showcase to the rest of the country how the BJP governments there safeguarded the Christian community’s interests and worked for their prosperity. BJP chief ministers should interact with the Christian community in Kerala and Goa is another plan.

That the Prime Minister chose the most important platform of the party to make a suggestion which goes against the grain of the slogans the party has traditionally raised is extremely important. It may be remembered that the BJP has never missed an opportunity to paint every attempt by its political opponents to reach the benefits of welfare schemes to the minorities as appeasement.  If the BJP decides that it will follow up on what Mr Modi prescribed for them, then there are a number of ready references the leaders can turn to and know of the condition of minorities, especially the Muslims.

The Justice Rajendra Sachar Commission, appointed by the United Progressive Alliance government in 2004 had submitted its report two years later, had documented the social-economical condition of Muslims. According to its report, “Muslims face fairly high levels of poverty. Their conditions on the whole are only slightly better than those of SCs/STs, though slightly worse in urban areas.” The community made up close to 14 per cent of the population but its representation in government jobs ranged from three per cent in civil service to 7.4 per cent in state level home department, far below its legitimate share.

A post-Sachar evaluation committee found eight years later that the poverty level of Muslims made no improvement; in fact, it worsened. The party can also refer to the Report of the Expert Group on Diversity Index (2008), India Exclusion Report (2013-14), 2011 Census and NSSO reports to convince itself about the urgent need to address the problems the community faces now.

Mr Modi has placed heavy stakes on the minority outreach programme as it directly contradicts his party’s political points. One may only wait to see its roll-out and possible impact.