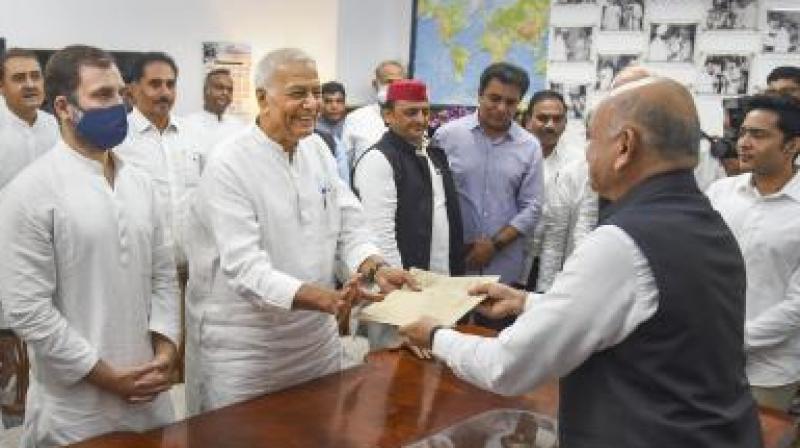 In all of a few weeks, the Grand Indian Opposition has faltered spectacularly. It has surrendered and handed an even greater advantage to Prime Minister Narendra Modi’s BJP than the one that it was already enjoying. After a string of big victories in four state Assembly elections, including a myth-shattering one in Uttar Pradesh, it hardly needed such a boost.

What has increasingly become clear is that catchphrases like “the idea of India”, “collapse of democracy” and “hijack of institutions” — clichés which the Opposition feels are a magic talisman to mobilise ordinary voters during election season — hardly found a place in their own parleys during the elections to the posts of the President and vice-president of India.

A set of regional parties and their satraps, and the teetering, stumbling Grand Old Congress Party, who could not come to agree on one common candidate for President or V-P, are now expected to act as champions of the very same causes of the “idea of India”, “secularism” and “democracy under siege”, ideals that have practically been disowned by many citizens as hollow and self-contradicting, and what’s more, they are also hoping to come out with a possible face for Prime Minister, an unifying leader of the Opposition, ahead of the 2024 general election.

This last item on its agenda must be fulfilled at once if the Opposition is serious about putting up a united fight against the ruling party and yet its accomplishment looks so unlikely in this season of Opposition disunity, with confusion reigning over basic priorities amid total dysfunctionality as far as finding and following a common purpose is concerned, that all the fire and brimstone sermons against “fascism” and for “liberty” by local leaders sound banal, even hypocritical.

The abject surrender of a common purpose means the Opposition has lost the war even before it was defeated in the two separate battles; the electoral defeats were actually less significant.

In contrast, Mr Modi’s BJP is aligned, each limb and sinew, to the larger goal of consolidating its power over every inch of the Indian political plane. The Opposition additionally gave Mr Modi the opportunity to take the credit of putting in the highest seat of prestige and protocol a tribal, a perfectly exemplifying and iconic representative of the most subaltern of underprivileged communities.

It forced upon some chief ministers like Naveen Patnaik, Hemant Soren and Y.S. Jagan Mohan Reddy a perfect rationale to break ranks and made the NDA victory even bigger, even more emphatic. Never was the lack of imagination of the Opposition leadership made more glaring.

By the time the field was being set for the vice-presidential elections, the core Opposition had fallen apart. Mamata Banerjee broke ranks with the Congress and abstained, while some from the beleaguered Uddhav Thackeray camp of the Shiv Sena and an increasingly irrelevant BSP’s Mayawati voted with the ruling side.

An Opposition that could not come together for these elections will find it extremely hard to convince the people that they can cobble up a semblance of a fight against Mr Modi in 2024, or even to seriously attempt it. This spectacle, more than the big victories in Uttar Pradesh and other states, will push the narrative reasonably successfully — which is that the next elections to the Lok Sabha would be a no contest and that Mr Modi’s triumph is all but a sure shot.