What India doesn’t do is to prepare a water management plan long before the rain waters surge to devastate people. 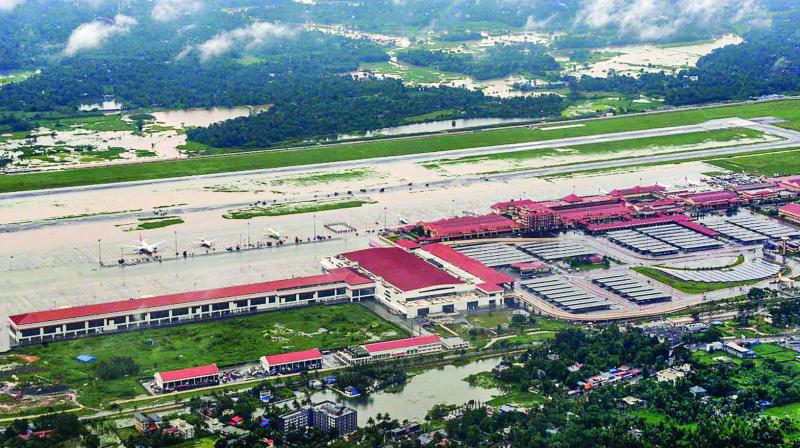 An aerial view of flood-hit areas of Cochin International Airport in Kerala on Friday. (Photo: PTI)

The cyclical phenomena of drought and floods haunt us every year, the floods devastatingly so as they endanger life, degrade homes and destroy roads and infrastructure. After seeing this pattern for years, we still only react to floods. What India doesn’t do is to prepare a water management plan long before the rain waters surge to devastate people. Preparation before the event is critical due to the changed nature of the threat we face, ironically from the bounty of rainfall. Thanks to climate change caused by global warming, climatic events are more extreme, erratic and unpredictable these days — on where they strike at their fiercest. The best way forward would be to trust science and prepare mitigation plans that may involve numerous small check dams to control river flows, than big dams whose environmental impact tends to fall more in the negative category.

West coast states Kerala, Karnataka and Maharashtra have been the worst hit in August to the extent of vast areas being crippled as they lie under flood waters. But Assam, Bihar, Gujarat, Madhya Pradesh and Uttarakhand have suffered too at the hands of the Great Indian Monsoon. Neither water management in dams nor the protection of areas on riverbanks has been sound enough to make any difference. The plight of Kerala, suffering massive floods for the second straight year, is emblematic of our helplessness in the face of nature, but only as we haven’t done much towards mitigation. The annual budgetary allocation for water management and civil works along river stretches are vital towards creating a masterplan in trying to handle events without their having to affect the lives of millions in catastrophic ways.