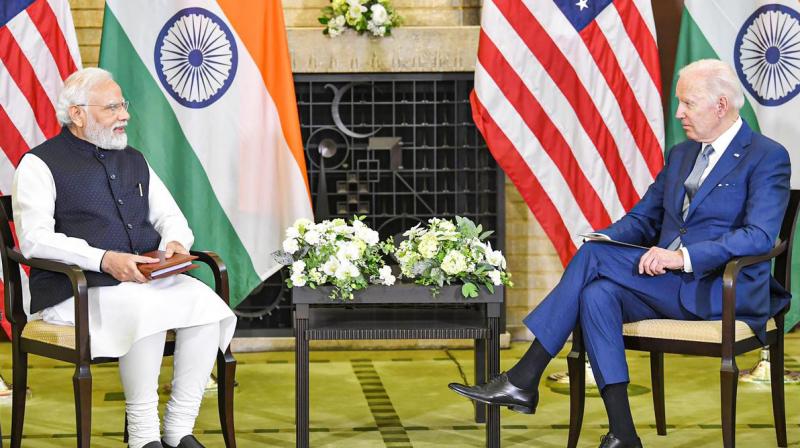 The American eagle is taking flight again. Having turned inwards in the middle the last decade under Donald Trump and struggled through a pandemic that took more lives in the US than anywhere else in the world, an inhibited Joe Biden presidency has just moved on to adjust US foreign policy to look at the Indo-Pacific as the next theatre of its strategic outreach.

In an obvious bid to counter China’s rise as an economic as well as security power, the US has offered a trade pact to a dozen democracies besides taking several measures to do with enhancing security cooperation among Quad partners. It’s clear that the US is proactive now to get over the global image rout after the hasty Afghanistan withdrawal.

In a way, it was a time to choose and India, seen suspiciously as the outlier in the Quadrilateral Security Dialogue because of its ambivalent approach to the Russian invasion of Ukraine and its propensity to buy a few million barrels of oil on the cheap, has decided to go with the trade pact involving 13 countries. It was an easy choice as the move is only likely to serve its interests. The tougher one was to do with throwing its weight behind Quad, with which idea India has reconciled now, putting aside its historical and military hardware ties with Russia for the moment.

India has been fortunate enough to have been able to convince the rest about its stand on Russia though it’s more than likely that the US President Joe Biden, in their bilateral talks, had impressed upon the Indian Prime Minister Narendra Modi the need to look at the Ukraine war as a global issue and to reassess the Indian neutral stand that flies in the face of the war having created a human catastrophe in civilian lives lost and the migration of millions it triggered.

Australia, led by new Prime Minister Anthony Albanese, shared the same wavelength with India when it came to avoiding mention of the Ukraine war while stressing the new agenda of focussing on climate action that came up for him as a crucial domestic election plank.  It’s a matter of curiosity that none of the partners have showed much of an inclination to accept fully the reassuring US security embrace, particularly so in India’s case as it has a neighbour breathing down its neck from the north.

It was at the venue of the summit that Mr Biden shed any strategic ambiguity in saying the US would spring to the aid of Taiwan militarily if it were to be invaded by China, a position that goes beyond what it was able to do for Ukraine to which only money and arms are flowing in a major aid pipeline. Even so, Quad not quite shaping into a Nato-like charter of assured mutual defence might not only assuage China but also help calm the waters of the Indo-Pacific.

The IPEF is still an amorphous concept but India can do well with it given the scope for greater closeness to the US since it’s not a party to other regional trade pacts like the RCEP in which China is a prominent member. India can take advantage of all that is being offered by the US in terms of technology cooperation in vital areas, joint climate action and rebuilding post-pandemic global supply chains in view of China’s belligerence. India should be pleased that it’s considered a key player in the changing geopolitics in the wake of the Ukraine war.