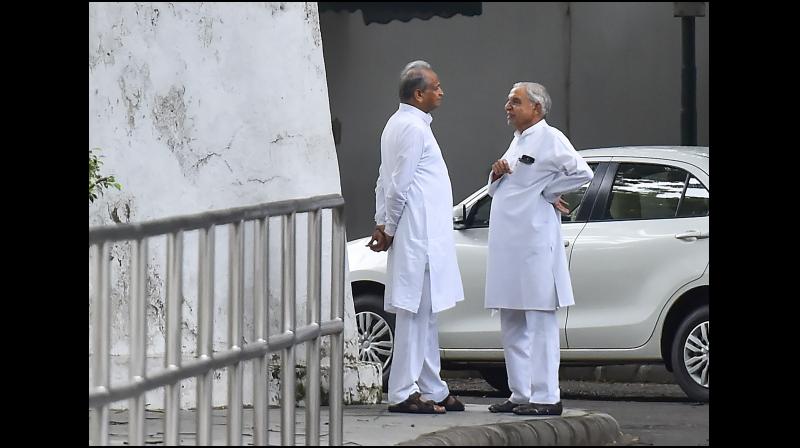 The Congress leadership’s attempts to find a new president for the party and make the exercise a package along with anointing a new chief minister in Rajasthan have ended up in a comedy of errors. And in the process, the party “high command”, which comprises essentially the Gandhi family and its close set of advisors, got a snub which substantially eroded its authority.

The boycott by as many as 92 of 108 party MLAs of the Congress legislature party meeting to elect a new leader is unprecedented in the Congress’ history. This is more so as the party leadership had made its choice abundantly clear. One need not hazard a guess as to who gives the MLAs the courage to defy the will of the party leadership.

The errors started from the very choice of Rajasthan chief minister Ashok Gehlot as AICC president. Mr Gehlot is a politician under his own steam — he is a third-time chief minister. And that too in a state which mostly prefers Congress’ archrival BJP in the Lok Sabha elections. If the party were to get the majority in the Assembly elections in such a state, then credit must go to the local leadership, too. In short, Mr Gehlot is no easy pushover.

Mr Gehlot had made it clear from the beginning that he is not interested in the new job but gave in to pressure. And yet he got nothing in return — neither his condition to retain chief ministership nor a say in the choice of his successor if the first one does not materialise was granted. In fact, former party president Rahul Gandhi publicly rejected the idea of a double role.

The party leadership should have measured the support Sachin Pilot, its choice for chief minister, enjoyed as it was on display when he revolted earlier. It also refused to take a realistic stock of the clout the “high command” held in the state.

There was a time when Congress had more than a dozen chief ministers and twice that number of Union Cabinet ministers. A position in the party, even a membership in the working committee, mattered a lot. But it is no longer the case. It has long lost power at the Centre and is left with just two states to rule. The post of the president of the party is hardly an enticing proposition for one of the two CMs. And it does not look like the party leadership made him an offer that he can’t refuse. Mr Gehlot cannot be faulted for thinking that he would be a loser — he will get no meaningful role in the affairs of the party at the Centre, and would be losing his grip in the state once his bête noire is appointed chief minister. The stakes were too high for him not to take a gamble.

The grand old party of Indian politics has not yet realised that it is fighting an opponent which has a gameplan for every parliamentary and Assembly constituency in the country. Its war room works 24x7. Lackadaisical politics, a myopic vision, a feudalistic attitude and ad hoc management practices can deliver no rewards. The earlier the Congress leadership reaslises it the better it is for itself.