In post-US Afghanistan, what are India’s options?

New Delhi has to move beyond its wait and watch policy 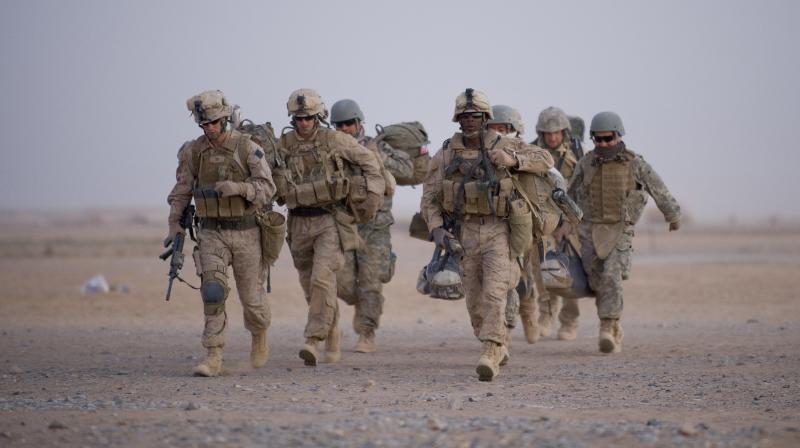 In American troops in Afghanistan. The US is keen to end its longest-ever conflict, and under the terms of a deal signed in Doha last month has said all foreign forces will quit Afghanistan within 14 months -- provided the Taliban stick to their security commitments. (AFP)

The peace deal reached between the United States and the Taliban on February 29 in Qatar notwithstanding, Afghanistan can descend into turmoil and instability yet again.

The contested election results and the parallel swearing-in ceremonies in Kabul combined with the signing of the peace pact and the beginning of another phase of insurgent violence have thrown up stark policy choices for New Delhi, testing its 'soft power' and 'middle-of-the-road' policy.

Despite its investments in Afghanistan for the past 18 years, it now appears that New Delhi remains a bystander to a rapidly changing political situation in that country.

Under the security umbrella provided by Washington, New Delhi adopted a 'soft power' approach, pledging aid and development assistance of more than US $3 billion.

This may have generated considerable 'goodwill' for India among Afghans. But such gains face the prospect of reversal if the political turmoil and future negotiations allow the Taliban to share power in Kabul.

A revisit of its Afghan policy may still secure India’s interests in the country.

India’s ambassador in Qatar attended the signing of the peace deal, while the previous day the foreign secretary had made a quick dash to Kabul to demonstrate support for president Ashraf Ghani.

This dual policy of supporting the Afghan government that has been kept out of the peace deal thus far and yet supporting American efforts of peacemaking doesn't send a clear signal to the Afghans or the region.

Having invested in the American-led democratic exercise in Afghanistan for more than a decade, New Delhi cannot just watch the Afghans being thrown under the bus. As a friend in need and a major regional power, New Delhi needs to chart its own course of action in Kabul that is useful to the Afghans and at the same time protects its own national interests.

Beyond support for Afghan-owned, Afghan-led and Afghan-controlled initiatives, New Delhi needs serious policy introspection about what these terminologies mean when Afghans are hardly let to be in charge of their own destiny.

The contested and fraud-marred presidential elections of September 28, 2019, have led to a precarious situation in Afghanistan for the last couple of months. Not just that the conduct of presidential elections was delayed from April to September, there were also talks at forming an interim government as a prerequisite for the signing of the peace deal with the Taliban.  After such attempts failed in September, elections were held with very little time for preparations.

In 2014, a carefully mediated deal by then US secretary of state John Kerry had brought the two opposing camps — of Ghani and Abdullah Abdullah — together under the National Unity Government (NUG).  The novel nomenclature notwithstanding, unity remained the absent entity.

I, then in Afghanistan, witnessed from close quarters how less of unity affected the government's functioning, as the two camps held opposing views on major issues.  Moreover, this experiment never received the approval by the constitutional Loya Jirgah.

The entire tenure of the NUG, therefore, lacked legitimacy that reinforced the Taliban narrative of not negotiating with puppet governments. The government in Kabul was hardly able to deliver of basic services, leaving large swathes of territory to come under insurgent influence and onslaught.

Amidst the spiralling violence and the battle fatigue that was developing in Afghanistan, the US reinitiated a peace process, after the infamous announcement by president Donald Trump had derailed a similar attempt back on September 2019.

The Qatar process this time bore fruit, leading to a peace deal was signed in Doha by the US representative and Taliban on February 29.

The deal, which has interesting parallels with the previous Paris accords, has been characterised clearly as a necessity sought by or Trump for his reelection bid this November. Successful projection of efforts leading to the end of America’s longest war in Afghanistan and return of troops may boost his winning prospects.

However, subsequent days have demonstrated the complexities of implementing the deal. Much less is known of the secret annexes of the deal that has raised concerns not only in Kabul but also other capitals.

The deal, which has been hailed by many, missed the key point by excluding the Afghan government and delaying the presidential inauguration till March 9, only a day prior to the scheduled date for conduct of the intra-Afghan dialogue.

Violence levels, meanwhile, had peaked immediately after the signing of the deal, amid Ghani's initial reluctance to release Taliban prisoners (up to 5,000) as agreed in the US-Taliban agreement.  While the insurgents have stopped targeting the Nato forces, the Afghans did not witness a respite.

The political turmoil and contestation has further complicated the situation. Despite the US effort led by Ambassador Khalilzad, Mr Abdullah’s decision to organise a parallel swearing-in ceremony reflected the disunity among Afghan political elites. Abdullah and Opposition leaders call for formation of a parallel government seems to have been endorsed by Russia, Iran and some other countries whose diplomatic staff attended his inauguration event.

The probability of external regional power intervention and support to their proxies as the turmoil deepens thus cannot be ruled out. Worse still, these moves have all the ingredients for the formation of Northern Alliance 2.0, a power bloc that could pose a direct challenge to the authority of the Ghani government. These multiple fractures and polarisation will have serious ramifications for the 100-day intra-Afghan dialogue supposed to be held to advance the peace process negotiations with the Taliban.

It is convenient as well as lazy to discount the element of success of the peace deal. Trump will leave nothing to chance to ensure that its efforts bear fruit as a demonstration of foreign policy success for his reelection bid. He has even announced his willingness to meet the Taliban leaders — a throwback to Ronald Reagan's meeting of the Mujahideen in the 1980s.

New Delhi, thus, has to move beyond its “wait and watch” policy and get proactive in developing long-term tools to prevent Afghanistan’s slide into chaos. A well-calibrated long-term strategy of building Afghan institutions, self-sufficiency and minimising external interventions may yield results. Flushing funds and the consequent elite buy-in will not help New Delhi achieve its national security objectives.

The signing of the peace deal and the narrative of defeating a superpower has emboldened other anti-India groups like Jaish-e-Mohammed, Lashkar-e-Taiba and others, which may have implications for Kashmir.

The “wait and watch” policy is bound to impinge on India’s interests in the country and region. There are early warning signs of India’s goodwill in Afghanistan beginning to evaporate with anti-India demonstrations organised in provinces like Kabul, Herat, Kapisa and others cannot be ignored. India’s domestic policies have started having implications on for its international standing that in all probability will be used by anti-India forces.

The Parliament building — an edifice of democracy, which India built — may eventually be occupied by the forces it tried to defeat. Beyond such symbolic structures and grandiose statements, India will have to play a larger role in enabling Afghans to take charge of their own affairs if it is to help prevent Afghanistan's further slide into instability and chaos.