Syed Ahmad Khan was one of modern India’s real architects

M J Warsi
The writer is a well-known linguist, author and columnist. He may be reached at warsimj@gmail.com

He knew what changes were required in society in order to move forward and keep up with the rest of the world. 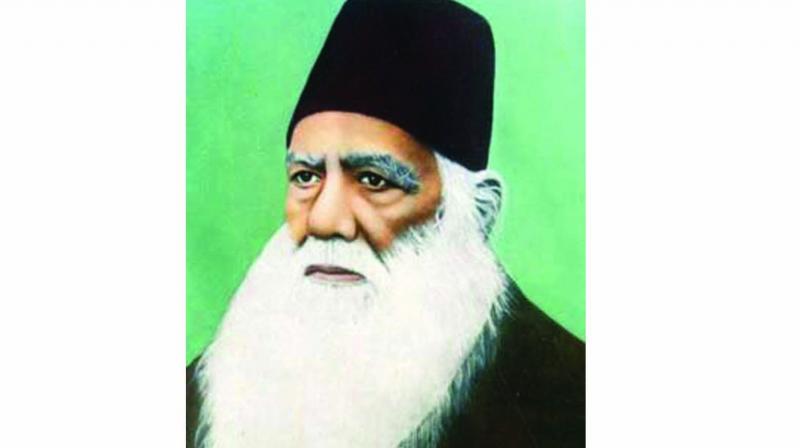 Sir Syed Ahmad Khan was a great intellectual, an enlightened and forward-looking educationist, an outstanding literary genius, an erudite theologian, a versatile writer and a fearless journalist, a pragmatic social reformer, an apostle of secularism and Hindu-Muslim unity and one very distinguished architect of modern India. It was the true nationalist in Sir Syed, who in 1859 had the courage of conviction to publish one of his most famous works Asbab-e-Baghawat-e-Hind (The Causes of the Indian Revolt) in which he exposed the aggressive expansionist policies of the British East India Company and their lack of understanding about Indian culture as the primary causes of the 1857 revolt. Sir Syed was also well-known for his physical strength. He enjoyed swimming and archery and was particularly good at both. He was born at a time when there were a lot of rebellious governors and religious insurrections aided and led by the East India Company. Together, these factors were diminishing the power of the Mughal empire. He saw this as an opportunity and used his educational prowess to stand up and make an impact in such dire circumstances. Sir Syed is referred to by many as the “man who knew tomorrow”. He played a very influential role in bridging the gap between the Oriental and the Western world. He knew what changes were required in society in order to move forward and keep up with the rest of the world. He dedicated his life to striking a balance between tradition and modernity and strived for traditional Oriental and Western scholarship.

Sir Syed encouraged the masses in society to keep up with the rest of the world by stressing on the importance of the English language. Many of his contemporaries were against his ideology and felt that this was a disservice to their own culture. However, Sir Syed saw the importance of English as a step through which the society could make major advancements. At that time, most knowledge about modern arts and sciences were available only in English. Sir Syed argued that people shouldn’t disregard a whole treasure of knowledge in English just because English was a language adopted by Westerners. He rightly believed that there is a lot of benefit that can be gained from learning the language. His advocacy of English didn’t mean that he wanted to move people away from Arabic. Sir Syed was, in fact, a strong supporter of Arab culture and the Arabic language. After the revolt in 1857, he realised that learning English was absolutely necessary in order to keep up in those days and that was a school of thought that
was very different than other scholars of his era. This was one of Sir Syed’s biggest social policies as he saw how the British empire was taking shape and that English’s educational style was taking charge. This clearly shows that Sir Syed was very practical with his school of thought and vision. Another important factor that differentiates Sir Syed’s social policy is that he always stood by his principles and defended what he thought was right. He did not succumb to pressure from the people around him.

Professor Tariq Mansoor, the vice-chancellor of Aligarh Muslim University, while addressing students and faculty members recently said, “Sir Syed Ahmad Khan, a great thinker and a man with a vision, always considered education as a basic need of modernisation, progress and development. The development of any world class academic institution largely depends on committed members of the faculty, a quality infrastructure, a supportive administration, a large pool of learning resources and last but not the least, hardworking and brilliant young students. Our focus is to make our students good human beings and also a successful professional through strategic teaching and guidance”.

Sir Syed Ahmad Khan also had forward-looking views on women and their rights. He was a strong voice, defending women’s rights and recognised their potential to contribute to society, which again never used to be the case. Sir Syed was termed as a “collective individual” by French sociologist Pierre Bourdieu. He successfully managed to take up the roles of a free-thinker, an administrator, a reformer, an educationalist, a religious scholar and a devout family man. Sir Syed was a major proponent of Western-style education and gaining a modern outlook of the world. He believed that this was the fundamental driving force the Muslim community needed in order to match with the rest of the world.

Sir Syed also proposed a modern take on Islamic education, which included present-day science. This was not the norm at that time. Sir Syed was himself one of the most respected scholars of his time. Despite heavily being involved in the political scene and being an active social reformist, Sir Syed always found time for his academic pursuits. His topics of interest included history, politics, archaeology, journalism, literature, religion and science. Sir Syed felt the future of Muslims would be in jeopardy if they continued to avoid modern science and technology. That is why he published many writings that promoted a liberal, rational and pragmatic train of thought. Sir Syed was then posted in Aligarh in 1864 and that is where he founded the first scientific association in India called the Scientific Society of Aligarh. Sir Syed gathered Muslim scholars from different parts of the country and modelled it after the Royal Asiatic Society. The society held several conferences and even collected and spent money
for different educational causes. The purpose of this society was to translate Western works into Indian languages so that Indian scholars could learn from the Western world. Sir Syed was appointed as a fellow of Calcutta University in 1876 and a fellow of Allahabad University by the Viceroy in 1887.

Sir Syed was the leader of the Aligarh movement. He founded the Mohammadan Anglo Oriential College in 1875 and this came to be known as the Aligarh movement. This move marked the birth of the first Muslim university in South Asia and drove modern Muslim education to make a significant political impact on Indian Muslims in all parts of India. Sir Syed modelled this college after Oxford and Cambridge after he took a trip to England. He wanted to build a college that aligned with the British educational system without compromising on any of the Islamic values. This movement encouraged poets and writers to switch from a romantic style of prose and poetry to a more cultural and political mindset which influenced the common life of Indian Muslims. Aligarh Muslim University is a creation of this movement.