A new kind of Bollywood hero is now emerging

Here, Ayushmann gets to channel his inner woman by effectively using his falsetto voice to fool ardent listeners. 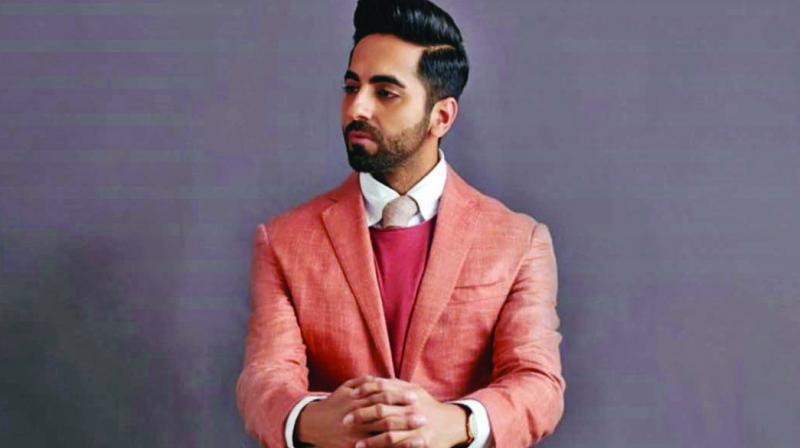 Even the silliest, crappiest Bollywood film tells us something about ourselves. I try and watch as many latest releases as time permits, and doggedly sit through all of them. Yes, all. For one, ticket prices at multiplexes are ridiculously high, and popcorn tubs cost more than a hearty meal at a neighbourhood dhaba. I need to get my paisa vasool kick after having spent that much. Frankly, I rarely regret the decision. Coincidentally, I watched two recent films, both starring Ayushmann Khurrana, back-to-back as it were. One, on a long flight back from Estonia, and the other at our friendly, neighbourhood multi-screen complex. I had missed Andhadhun when it first released in theatres and was delighted to see it featured on the Lufthansa inflight entertainment menu. The second, Dream Girl, intrigued me because of the quirky poster, which showed Ayushmann coyly clad in a saree. Oh oh … so here he was taking another risk as an actor, I thought to myself. And that showed confidence plus intelligence. Andhadhun had him play a visually challenged pianist who gets involved in murky murders, which he may or may not have committed. In Dream Girl, he plays a cross-dresser — a much admired “Ram Lila” artiste, loved by all in his “hood” for convincingly playing the roles of Sita and Draupadi. His next gig involves pretending to be Pooja, a call centre “girl” who provides late night phone sex to lonely men (and one woman), and has some of her regulars falling in love with her. Here, Ayushmann gets to channel his inner woman by effectively using his falsetto voice to fool ardent listeners. Both roles demand that certain “X-Factor” to work with audiences. Dream Girl, made on a modest budget of `30 crores, is headed towards the `100-crore benchmark that determines an actor’s brand worth in Bollywood. This makes it Ayushmann’s sixth hit in a row.

What I find most intriguing about today’s mixed bag of movies is the choice of subjects. Diverse forms of sexuality are no longer guilt-ridden, taboo topics to be avoided, and different expressions of sexual conduct have smoothly crept into mainstream cinema when nobody was looking. Even if Dream Girl has been shredded by critics for being homophobic, the idea of the lead actor playing a cross-dresser and impersonating a woman called Pooja is already breaking new ground. This also means the conventional heroes of film land need to rethink their careers — and fast. It’s only once in a decade that actors like Ayushmann and Vicky Kaushal barge into mainstream Bollywood movies, pick tricky subjects, deliver one hit after another, and end up creating a new genre, almost by default. This level of success by “outsiders” also shows a healthy shift in audience tastes. Hopefully, Bollywood will be compelled to wake up to these new trends and realities that do not bank heavily on mega star power to set cash registers ringing. There will always be room for one annual mother of an extravaganza a la Sanjay Leela Bhansali, but the fantasy factory will necessarily have to rejig and rethink its old-school formula which relied on the Khans to keep the film industry afloat. I think the era of the Khans dominating the box office is as good as over. Today’s cine goer does not care if a Khan headlines the show, so long as the show itself is engaging. Gone too is the era of elaborate sets and OTT “item songs”. Locations have moved out of film city and spilled onto the mean streets of small town India. Nobody is interested in what happens inside those towering Mumbai high rises. Life in a metro has had its day. Now, it’s life in Gwalior or Varanasi or Indore that is captivating filmgoers. And it is the script that commands attention more than just the stars in the movie. A script that accurately captures the mood of a new India which is shaking off age-old traditions and embracing change. These are the realities we love to watch as they are taking place in the country. If the big budget filmmakers lack the guts to take risks with such subjects, there are many other young and daring first-timers gambling with unusual subjects — and winning.

The mould of the “hero” has also drastically altered. Yes, the action heroes will always attract loyal fans, but the romantic heroes of old — who got the girl, lost the girl, and found her again in the grand finale — are no longer all that interesting to viewers. Today, a cross-dresser in an elaborate lehenga, wearing orange lipstick and a long wig, can still grab fans who see beyond his costume and connect with the character he is playing on screen. Ayushmann, more than any of his contemporaries, has the ability to immerse himself totally in the role (Vicky Donor), and have the audience emphathise with him. He does not look or sound ridiculous as Pooja. It is not a superficially caricatured representation either. He plays it straight — like any other jobless man desperately taking up an assignment that will pay his bills and take care of a loan. That’s it. You feel for him. You get the dilemma. You root for him all the way. That’s called good acting.

The transformation we are witnessing in our movies reflects what’s going on in the country. I am not sure when and how it happened, but a major sexual shift has taken place, which we are seeing being tackled head on by Bollywood. The attempt is clumsy at times. But at least it is being made. And the cliché chocolate hero mould has been convincingly broken … starting with Nawazuddin Siddiqui, with his smouldering looks and burning coal eyes. These men do not fall into the category of “anti-heroes”. They are full-fledged heroes, capable of carrying the film on their shoulders. Their success should be seen as a writing on the wall for all the pumped up, spoilt-boy superstars of Bollywood. “Aapka time chala gaya…”

Move over, bro… make way for these talented newbies.

Mohan Guruswamy | The small stimulus and the fiscal deficit fetish

Dilli Ka Babu | Shramik Special disgrace: Can it be traced to crisis within Railways