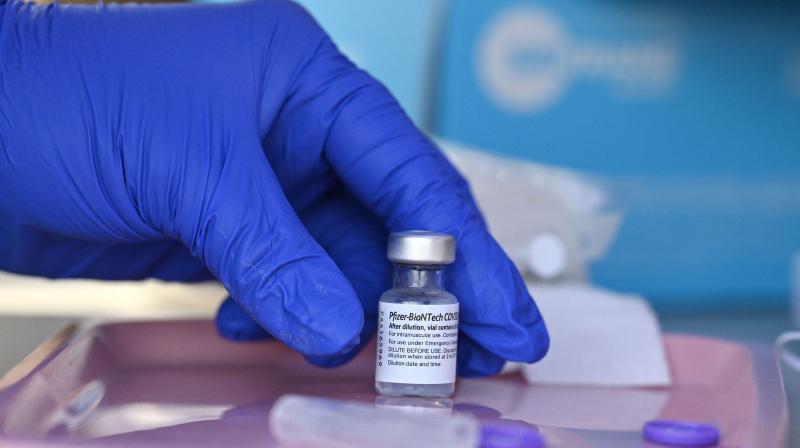 In this photo, a nurse reaches for a vial of Pfizer-BioNTech Covid-19 vaccine at a pop up vaccine clinic. (Photo: AFP/File)

Washington: Two doses of the Pfizer COVID-19 vaccine are 90 per cent effective against hospitalisation from the disease for all variants, including Delta, for at least six months, according to a study published in The Lancet journal on Tuesday.

The researchers found that over the study period, effectiveness of the vaccine against all SARS-COV-2 infections declined, falling from 88 per cent within one month after receiving two vaccine doses to 47 per cent after six months.

However, the effectiveness of Pfizer (BNT162b2) vaccine against hospitalisations remained at 90 per cent overall for all variants, they said.

The study underscores the importance of improving COVID-19 vaccination rates worldwide and monitoring vaccine effectiveness to determine which populations should be prioritised to receive booster shots, the researchers said.

"Our study confirms that vaccines are a critical tool for controlling the pandemic and remain highly effective in preventing severe disease and hospitalisation, including from the Delta and other variants of concern," said the study's lead author, Sara Tartof from Kaiser Permanente in the US.

"Protection against infection does decline in the months following a second dose," Tartof said.

The researchers noted that considerations for booster shots should take global COVID-19 vaccine supply into account as people in many countries around the world have not yet received a primary vaccination series.

During the study period, 5.4 per cent of people were infected with SARS-CoV-2. Among those who were infected, 6.6 per cent were hospitalised.

The average time since being fully vaccinated was between three to four months.

The study found that vaccine effectiveness against Delta variant infections at one month after two doses of Pfizer was 93 per cent and fell to 53 per cent after four months.

Effectiveness against other variants at one month after receiving two doses was 97 per cent and declined to 67 per cent after four months, the researchers said.

Effectiveness against Delta-related hospitalisations remained high (93 per cent) for the duration of the study period, they said.

Researchers did not observe a difference in waning between SAR-CoV-2 variant types.

However, they noted that because Delta became the dominant strain in the middle of the study period, analyses with longer follow-up to measure the rate of waning for the variant compared to other strains are needed.

"COVID-19 infections in people who have received two vaccine doses are most likely due to waning and not caused by delta or other variants escaping vaccine protection," said Jodar.

The authors acknowledge some limitations in their study.

The researchers could not determine causal relationships between vaccination and COVID-19 outcomes as vaccination status among the study population was not randomised.

They also did not have data on adherence to mask guidelines, social interactions, occupation, and disease rates in the study population, which could impact the likelihood of contracting and being tested for SARS-CoV-2 infection.