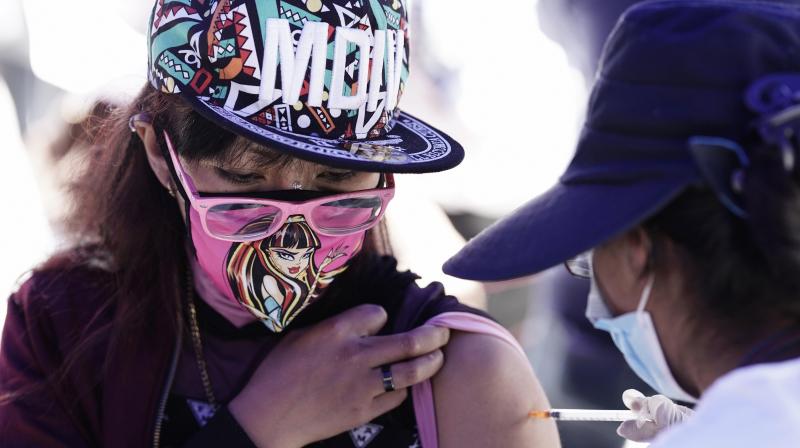 A youth gets a shot of a COVID-19 vaccine at the vaccination center in La Paz, Bolivia. (Photo: AP)

New Delhi: Biopharmaceutical multinational AstraZeneca on Thursday said the preliminary analysis of an ongoing safety and immunogenicity trial has indicated that Vaxzevria, when given as a third dose booster, increased antibody response to the Omicron variant.

The results were observed among individuals previously vaccinated with either Vaxzevria or an mRNA vaccine.

Serum Institute of India CEO Adar Poonawalla said in a tweet: "This is encouraging news, as per Professor Sir Andrew J Pollard, chief investigator and director of the Oxford Vaccine Group, new data from ongoing Astazeneca/Oxford vaccine trials has shown that three doses give good protection against Omicron.".

Under a sub-licence agreement with AstraZeneca, the Vaxzevria vaccine is manufactured and supplied by the Serum Institute of India under the name Covishield.

"Vaxzevria has protected hundreds of millions of people from COVID-19 around the world and these data show that it has an important role to play as a third dose booster, including when used after other vaccines," Mene Pangalos, executive vice-president (biopharmaceuticals R&D) of AstraZeneca, said in a statement.

Given the ongoing urgency of the pandemic and Vaxzevria's increased immune response to the Omicron variant, the company will continue to progress regulatory submissions around the world for its use as a third dose booster, he added.

Andrew J Pollard, chief investigator and director of the Oxford Vaccine Group at the University of Oxford, said, "These important studies show that a third dose of Vaxzevria after two initial doses of the same vaccine, or after mRNA or inactivated vaccines, strongly boosts immunity against COVID-19."

The Oxford-AstraZeneca vaccine is suitable as an option to enhance immunity in the population for countries considering booster programmes, adding to the protection already demonstrated with the first two doses, he added.

Vaxzevria was invented by the University of Oxford.

It uses a replication-deficient chimpanzee viral vector based on a weakened version of a common cold virus (adenovirus) that causes infections in chimpanzees and contains the genetic material of the SARS-CoV-2 virus spike protein.

After vaccination, the surface spike protein is produced, priming the immune system to attack the SARS-CoV-2 virus if it later infects the body.

The vaccine has been granted a conditional marketing authorisation or emergency use in more than 90 countries.

It also has the emergency use listing from the World Health Organization, which accelerates the pathway to access in up to 144 countries through the COVAX facility.