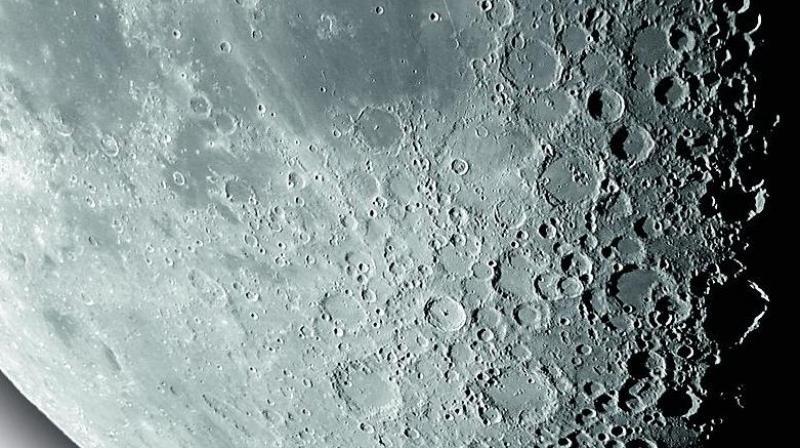 It wasn't clear how a Moon-sized body could have generated a magnetic field that strong. (Photo: Twitter/File)

Rhode Island: Ever since rocks were brought back from the Moon to the Earth, during NASA's Apollo program from 1968 to 1972, an enduring mystery continued to baffle scientists: the Moon's magnetic field - one that rivalled Earth's in strength. Now, research led by a Brown University geoscientist proposes a new explanation for the Moon's magnetic mystery.

It wasn't clear how a Moon-sized body could have generated a magnetic field that strong. But now, the study, published in 'Nature Astronomy', has shown that giant rock formations sinking through the Moon's mantle could have produced the kind of interior convection that generates strong magnetic fields.

The processes could have produced intermittently strong magnetic fields for the first billion years of the Moon's history, the researchers said.

"Everything that we've thought about how magnetic fields are generated by planetary cores tells us that a body of the Moon's size should not be able to generate a field that's as strong as Earth's," said Alexander Evans, an assistant professor of Earth, environmental and planetary sciences at Brown and co-author of the study with Sonia Tikoo from Stanford University. "But instead of thinking about how to power a strong magnetic field continuously over billions of years, maybe there's a way to get a high-intensity field intermittently. Our model shows how that can happen, and it's consistent with what we know about the Moon's interior."

Planetary bodies are known to produce magnetic fields through what's known as a core dynamo. Slowly dissipating heat caused convection of molten metals in a planet's core. The constant churning of electrically conductive material was what produces a magnetic field. That's how Earth's magnetic field -- which protected the surface from the sun's most dangerous radiation -- was formed.

The Moon lacked a magnetic field and models of its core suggested that it was probably too small and lacked the convective force to have ever produced a continuously strong magnetic field. In order for a core to have a strong convective churn, it needed to dissipate a lot of heat. In the case of the early Moon, Evans said, the mantle surrounding the core wasn't much cooler than the core itself. Because the core's heat didn't have anywhere to go, there wasn't much convection in the core. But this new study showed how sinking rocks could have provided intermittent convective boosts.

The story of these sinking stones started a few million years after the Moon's formation. Very early in its history, the Moon is thought to have been covered by an ocean of molten rock. As the vast magma ocean began to cool and solidify, minerals like olivine and pyroxene that were denser than the liquid magma sank to the bottom, while less dense minerals like anorthosite floated to form the crust.

The remaining liquid magma was rich in titanium as well as heat-producing elements like thorium, uranium and potassium, so it took a bit longer to solidify. When this titanium layer finally crystallized just beneath the crust, it was denser than the earlier-solidifying minerals below it. Over time, the titanium formations sank through the less-dense mantle rock underneath, a process known as gravitational overturn.

For this new study, Evans and Tikoo modelled the dynamics of how those titanium formations would have sunk, as well as the effect they might have when they eventually reached the Moon's core. The analysis, which was based on the Moon's current composition and the estimated mantle viscosity, showed that the formations would likely break into blobs as small as 60 kilometres and diameter, and sink intermittently over the course of about a billion years.

When each of these blobs eventually hit bottom, they would have given a major jolt to the Moon's core dynamo, the researchers found. Having been perched just below the Moon's crust, the titanium formations would have been relatively cool in temperature -- far cooler than the core's estimated temperature of somewhere between 2,600 and 3,800 degrees Fahrenheit. When the cool blobs came in contact with the hot core after sinking, the temperature mismatch would have driven an increased core convection -- enough to drive a magnetic field at the Moon's surface as strong or even stronger than Earth's.

"You can think of it a little bit like a drop of water hitting a hot skillet," Evans said. "You have something really cold that touches the core, and suddenly a lot of heat can flux out. That causes churning in the core to increase, which gives you these intermittently strong magnetic fields."

There could have been as many as 100 of these downwelling events over the Moon's first billion years of existence, the researchers say, and each one could have produced a strong magnetic field lasting a century or so.

"This model is able to explain both the intensity and the variability we see in the Apollo samples -- something that no other model has been able to do," Evans said. "It also gives us some time constraints on the foundering of this titanium material, which gives us a better picture of the Moon's early evolution."

The idea is also quite testable, Evans said. It implies that there should have been a weak magnetic background on the Moon that was punctuated by these high-strength events. That should be evident in the Apollo collection. While the strong magnetic signatures in the Apollo samples stuck out like a sore thumb, no one has ever really looked for weaker signatures, Evans said.

The presence of those weak signatures along with the strong ones would give this new idea a big boost, which could finally put the Moon's magnetic mystery to rest.