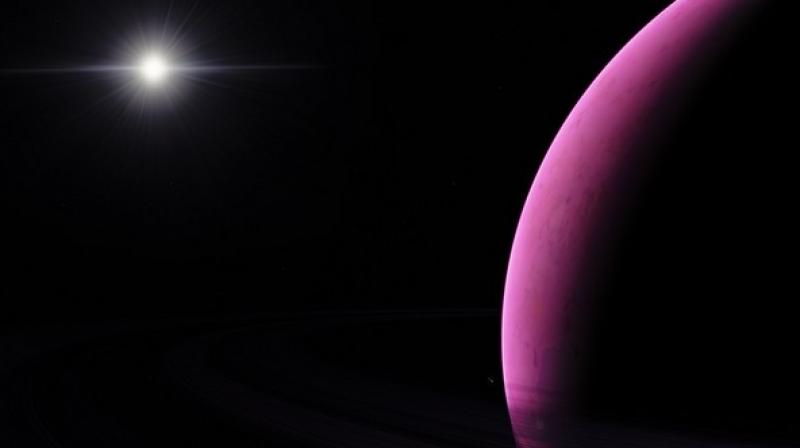 The team discovered an exoplanet 1.4 times the size of Jupiter. (Photo: ANI/Representational Image)

New Delhi: Indian astronomers have added another feather to their cap as they have recently made two new discoveries -- an exoplanet 1.4x the size of Jupiter and a rare class of radio stars hotter than the Sun.

The first discovery was made by a team from Ahembdabad's Physical Research Laboratory (PRL) recently. The team discovered an exoplanet 1.4 times the size of Jupiter, orbiting an ageing star that is 1.5 times that of our Sun and located 725 light-years away.

The new exoplanet, dubbed TOI 1789b, was discovered by Professor Abhijit Chakraborty and his team using the Advanced Radial-velocity Abu-sky Search (PARAS) optical fibre-fed spectrograph--the first of its kind in India--on the 1.2-metre Telescope of PRL at its Mt Abu Observatory.

The exoplanet's mass is discovered to be 70 per cent that of Jupiter, and its size is around 1.4 times that of Jupiter. The researchers made the discovery using PARAS, which is capable of measuring the mass of an exoplanet.

The measurements were taken between December 2020 and March 2021. ISRO added that in April 2021, it acquired additional follow-up readings from the TCES spectrograph from Germany and independent photometric observations from the PRL's 43-cm telescope at Mt. Abu.

TOI 1789b orbits its Sun in just 3.2 days, putting it at a distance of 0.05 AU from the star (roughly one-tenth the distance between Sun and Mercury). Amongst the numerous exoplanets known so far, there are less than ten such close-in systems.

Due to its closeness to its host star, the planet is intensely hot, with a surface temperature of up to 2000 K. It also has an expanded radius with a density of 0.31 gram per cc--making it one of the lowest density planets known.

The second discovery was made last week by another team from the Pune-based National Centre for Radio Astrophysics (NCRA). The team led by Barnali Das found eight stars belonging to a rare class of radio stars that are warmer than the Sun, with unusually strong magnetic fields and much stronger stellar wind.

A Giant Metrewave Radio Pulse (uGMRT) was used to make this discovery. Speaking about the new discovery, the NCRA said that the success of the GMRT programme has revolutionised the notion about this class of stars and opened up a new window to study their exotic magnetospheres.

Interestingly, only 15 MRPs have been detected in space so far, 11 of which were discovered by the astronomers in Pune. Furthermore, eight of the 11 stars have been discovered this year.

The success of the uGMRT study suggests that MRPs may not really be rare, but simply difficult to detect, as radio pulses are only visible at particular times, and usually noticeable only at low radio frequencies.