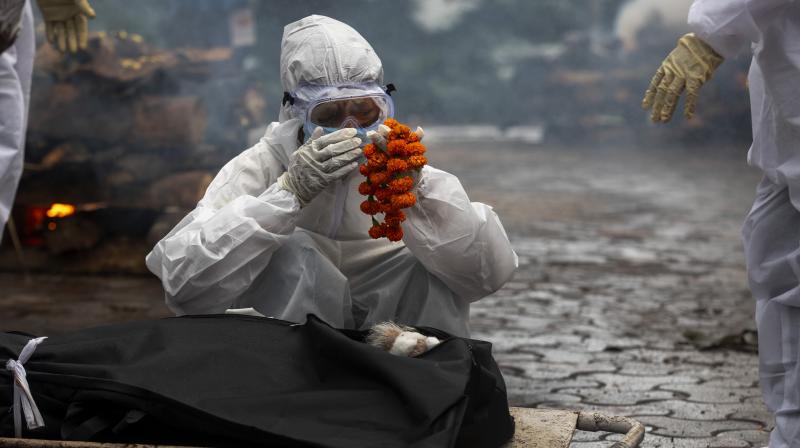 In this file photo, a relative performs last rites before the cremation of a COVID-19 victim in Gauhati. (Photo: AP/File)

Bonn: A new study has highlighted the protective factors that can help people cope with the severe strain caused by the COVID-19 pandemic.

The study conducted by the University of Bonn is based on a large joint online survey at the University Hospitals Bonn, Erlangen, Ulm, Dresden, and Cologne, which also involves many other hospitals in Germany. The results have been published in the journal PLOS ONE.

Perceived coherence was found to be particularly important - in simple terms: the feeling that life has meaning and challenges can be classified in an understandable way.

The researchers invited employees in health care to take part in an online survey from April to July last year, i.e. during the first wave of the pandemic. "Alongside physicians and nursing staff, this also included two groups who have so far been overlooked in the discussion," explained Professor Dr Franziska Geiser, Director of the Clinic for Psychosomatic Medicine and Psychotherapy at University Hospital Bonn.

Geiser added, "Firstly, the comparatively small number of pastoral workers in the hospitals. Secondly, the many medical and technical employees - the medical technical assistants within the examination, radiology, and the laboratories."

More than 4,300 completed questionnaires were evaluated during the current study. A good 80 per cent of the participants worked in hospitals at the time of the survey, 11 per cent at University Hospital Bonn. They were asked to state, among other things, how stressed they felt by their work at present and before the survey and how often they suffered from symptoms of depression and anxiety.

Information was also collected on three possible "resilience factors", which are assumed to protect against mental consequences of stress: social support, religiosity, and sense of coherence.

More than 20 per cent of the respondents in each case stated that they had symptoms of depression or anxiety to an extent requiring treatment. "We do not know exactly what the situation was like for this sample before the pandemic," explained Geiser.

He continued, "However, the values found are higher than in earlier studies among physicians and nursing staff, so we can assume there has been an increase during the pandemic. While, during normal times, physicians and nurses display higher mental strain than the rest of the population, they actually had lower anxiety values during the pandemic in our survey. This naturally makes us curious about possible protective factors."

All the more so as Geiser is part of an interdisciplinary DFG research group at the University of Bonn, which is dedicated to researching resilience.

Sense of coherence particularly stands out among the potential resilience factors. The term comes from salutogenesis, a concept developed by medical expert Aaron Antonovsky in the 1980s, which focuses on searching for health-promoting factors and attitudes. "Sense of coherence refers to the extent to which we perceive our life as understandable, meaningful, and manageable," explained Jonas Schmuck from Geiser's working group, who is the lead author of the study together with Dr Nina Hiebel.

The more pronounced the sense of coherence among employees, the less often they suffered from mental symptoms. "However, a causal relationship cannot necessarily be derived from this," said Geiser as a warning against drawing premature conclusions. "It may also be the case that anxiety or depression themselves minimize perceived coherence."

Nevertheless, she believes that this factor actually makes us more resilient to stress and particular challenges. In her view, the study thus brings to light important conclusions on how people should handle crises like the COVID-19 pandemic in the future. "The more complex the situation, the better we need to communicate," she stressed.

"Uncertainties and also contradictions, such as with regard to protective measures or treatment processes, are unavoidable in a new situation like the pandemic. The better it is explained to employees why this is the case and the more personal meaning they experience in their work, the better they can handle it. Timely information is therefore essential." This information should not only flow in one direction, according to Geiser. "It is important to enter into a dialogue that also allows for questions and responses to concerns," she said.

Incidentally, those who suffered the greatest from the mental consequences of the pandemic in the study were the medical technical assistants. "We can only speculate as to why this is the case," explained the researcher. "However, we should definitely bear in mind that it is not only the intensive care wards that are put under pressure in such situations but the entire system. We must also encourage those who are perhaps not in the limelight quite so much but are often forgotten as helpers in the background."

Pastoral workers also stated an increase in stress due to the pandemic, although, in comparison to the other professional groups, they displayed the most pronounced sense of coherence and the fewest symptoms of anxiety and depression.