India’s new vice-captain reflects on how he spent days sitting out of Test series. 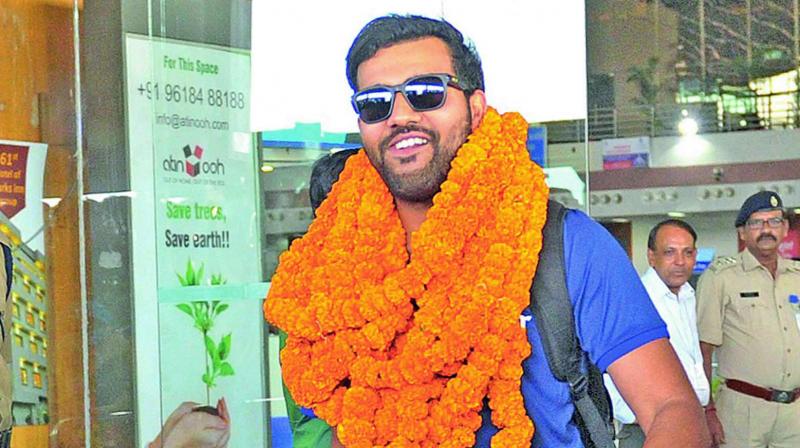 Pallekele: Rohit Sharma is hugely honoured at being appointed vice-captain of the Indian ODI team after an “up and down 10 years” of international cricket, where he is yet to cement a spot in the Test XI. The opener did not get to play in the Test series and is keen to make amends in the five-match ODI series starting on Sunday.

“Firstly, it is a huge honour to be appointed as the vice-captain. Ten years ago, I was only thinking of playing for India. Being the vice-captain now feels really, really good,” Sharma said. “It’s a kind of honour that whenever the opportunity comes, the first one-dayer when we come on August 20, there will be some sort of role that I will need to play and I am looking forward to it. I am not thinking too much about it. I just want to enjoy the moment as of now.”

Sharma is used to taking additional responsibility on the field, having captained Mumbai Indians in the Indian Premier League to three titles. When asked to about compare his IPL and the newly assigned role with the Indian team, Sharma replied, "It's a different ballgame completely. IPL and when you come and play international cricket, it is completely different. But again, the excitement and the energy level is the same.

“So yes, nothing changes too much. I am the vice-captain here, there I was the captain, and so I was more in front. Here I have to play a little behind-the-scene role. But yes, I will be very excited to step on to the field as the vice- captain.” Sharma also reflected on what has been a roller-coaster ride in international cricket so far. He has been unable to cement a spot in the first-choice Test XI, but only wants to look ahead to what is the second half of the tour.

“Firstly, it’s gone very fast, those 10 years. Yes, there has been ups and downs but that’s how it is for any sportsman, and that’s how it should be. You get to learn a lot more from ups and downs. “I always wait for this opportunity, whenever I get this opportunity, to play for India, whichever format it is. Before those ten years, I never thought I would play for India.

“I was just enjoying my cricket, playing for my school, for Mumbai and yes, once I realised that cricket is getting tougher and tougher. When I started playing Ranji Trophy, I realised that I have that goal where I can look at. And once I was picked up for Indian team, there was no looking back from then,” he said. He has spent more than a decade in international cricket but Sharma still treats every day as a new day. “Today I got to learn playing those sweeps and reverse sweeps when someone like Lasith Malinga comes and bowls to you. So everyday you enter the field you go on to learn something new.

“There were so many things in 10 years I have learnt. Especially in limited overs format initially when I came in, I sort of used to play too many shots at once.”