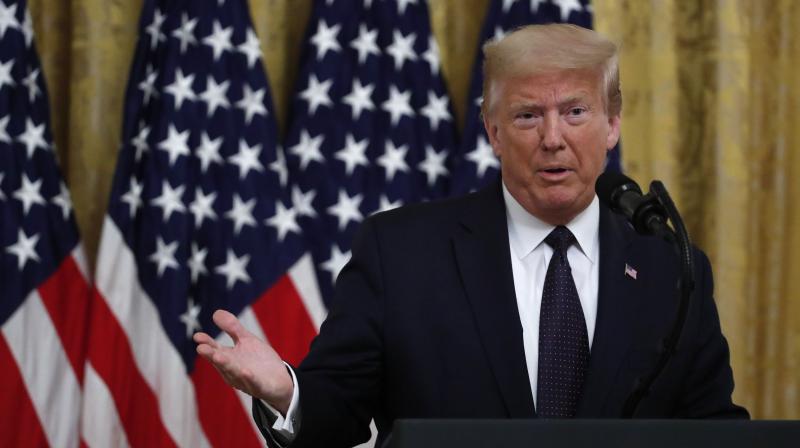 The legislation and executive order stem from claims by Trump and his allies that social media platforms are biased, despite his own large following on Twitter and other platforms. (Photo | AP)

Senator Josh Hawley said his measure, if enacted, “gives users the right to sue if the big platforms enforce their terms unfairly or unequally.”

The bill comes weeks after President Donald Trump accused social platforms of suppressing conservative political voices and signed an executive order which could eliminate the liability shield of online services for content posted by third parties, despite doubts about its enforceability.

The Hawley bill, co-sponsored by fellow Republicans Marco Rubio, Tom Cotton and Mike Braun, would revise the “Section 230” legal protection mechanism for online services if they fail to act “in good faith” to moderate content.

The bill would strip the liability protection to services that “restrict access to or availability of material against a user by employing an algorithm that selectively enforces” its policies.

The legislation and executive order stem from claims by Trump and his allies that social media platforms are biased, despite his own large following on Twitter and other platforms.

“Big Tech companies like Twitter, Google and Facebook have used their power to silence political speech from conservatives without any recourse for users,” Hawley said in a statement.

“Congress should act to ensure bad actors are not given a free pass to censor and silence their opponents.”

Activists and legal specialists argue that Section 230 is a cornerstone of the open internet by allowing services to host content from third parties without fear of legal action.

The law allows for platforms to moderate content and remove materials deemed to be promoting hate or violence, according to Section 230 defenders.

But critics across the political spectrum have said the liability shield opens the door to a range of harmful online content.

Some analysts argue that the efforts to regulate social media could be unconstitutional limits on free expression under the constitution’s First Amendment.

“I see this as a straightforward First Amendment violation,” Eric Goldman, director of the High-Tech Law Institute at Santa Clara University, said of the bill.

Additionally, he said the bill would lead to “an infinite number of lawsuits” against internet firms because of the vague definition of good faith actions.

Separately, the Trump administration called for reforms of Section 230 to “provide stronger incentives for online platforms to address illicit material on their services while continuing to foster innovation and free speech. “

Matt Schruers, president of the Computer & Communications Industry Association, a trade group which includes Google and Facebook, termed the plan “shockingly ill-conceived,” calling it an attack on a law which protects free speech online while giving digital services the ability to remove objectionable content with limited legal risk.

“Amid a pandemic, pervasive racial injustice, in an election season, the Justice Department proposes to remove from this critical statute the language that provides legal certainty for the removal of everything from coronavirus misinformation to racism to disinformation by foreign intelligence operatives,” Schruers said in a statement.

“Why would the Justice Department want to limit companies’ ability to fight these threats?”