The institute is 20 years old this year. 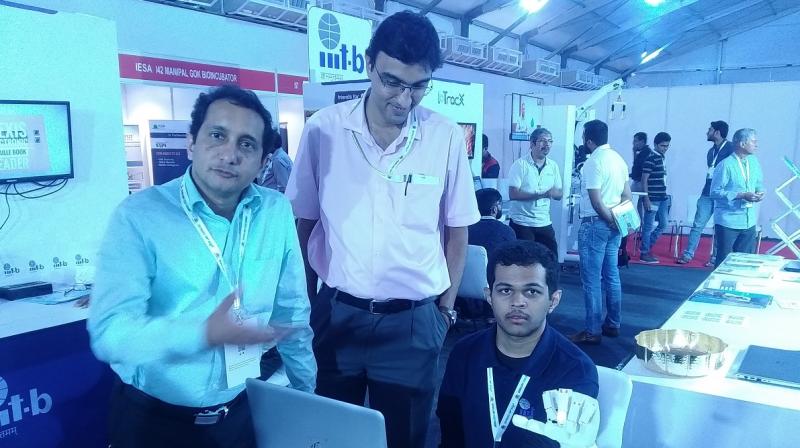 IIIT-B is working with Dr Vikas V, Associate Professor, Department of Neurosurgery at the National Institute of Mental Health and Neuro Sciences.

The International Institute of Information Technology, Bangalore (IIIT-B), leveraged the just-concluded Bangalore Tech Summit to showcase a number of innovative projects handled by students and being taken to production in partnership with other institutions.

IIIT-B is working with Dr Vikas V, Associate Professor, Department of Neurosurgery at the National Institute of Mental Health and Neuro Sciences, Bangalore to create an Upper Limb Rehabilitation Robot which will prove useful for patients who have wholly or partially, lost the mobility function of their arms and fingers. The IIIT-B team is led by Associate Professor Madhav Rao, who is helping create a suite of surgical and assistive devices, many of them at IIIT-B's Machine Intelligence and Robotics Centre (MINRO).

In another project, IIIT-B has created a robust and scalable identity platform which allows nations or institutions to create citizen identity systems similar in scope to Aadhaar.

The platform called MOSIP harnesses Open Source and being modulur, allows nations to mix-n-match features to customise the identity system. For example in some countries, they like to include the blood group in the citizen information.

The effort is supported by the Bill and Melinda Gates Foundation, the Omidyar Network and Tata Trust. A pilot is now running in the Philippines.

Also drawing many visitors at the tech summit was another IIIT-B -partnered venture, Bionic Yantra which has crafted a wearable Robotic Exoskeleton Assisted Rehabilitation System to help wheelchair-bound patients improve their mobility. REARS is a powered, intelligent device to provide calibrated support and on-demand assistance for limb movement as required during rehabilitation. It is useful in conditions, both long-term such as Stroke, Spinal Cord Injury, Cerebral Palsy, Cardio-pulmonary, etc. and short-term such as dual leg fractures, hip/knee replacements, Obesity, Parkinson's disease, etc. The institute is helping commercialize the product for rollout next year.

Many of these progressed at the Institute's start up centre, IMACX, which over a decade has nurtured dozens of start ups, many of which are established names now at the intersection of technology and society, says the centre's CEO Prof Ramesh Sundararaman.

IIIT-B was established in 1999 with a vision to contribute to the IT world by focusing on education and research, entrepreneurship and innovation. Situated in Bangalore's Electronic City, It awards M.Tech degrees and doctorates in IT and Electronic Systems and has been led for all these 20 years by veteran tech educationist Prof S. Sadagopan who came here from IIT Kanpur.