US ambassador to the UN Nikki Haley said that China is the only country which knows how to stop North Korea. 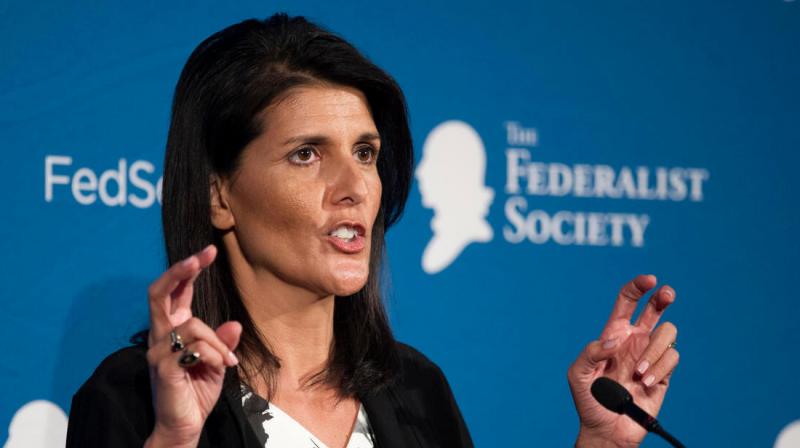 Haley emphasized that at the Florida summit 'the most important conversation will be how we're going to be dealing with the non-proliferation of North Korea'. (Photo: AP)

Washington: The United States will "put pressure" on China to take action against North Korea's  nuclear weapons program, the US ambassador to the United Nations said on Sunday, days before a high profile visit by China's president.

"The only country that can stop North Korea is China and they know that," Ambassador Nikki Haley told ABC in an interview broadcast on Sunday. "We're going to continue to put pressure on China to have action."

Chinese President Xi Jinping is scheduled to meet Donald Trump on April 6 and 7 at the US president's Mar-a-Lago resort in Florida for their first face-to-face encounter.

It is being held amid rocky US-China relations over North Korea's nuclear and missile programs, trade and other issues.

On Thursday, Trump predicted a "very difficult" summit, noting the disputes over trade policy between the world's two most powerful nations and leading economies.

But Haley emphasized that at the Florida summit "the most important conversation will be how we're going to be dealing with the non-proliferation of North Korea."

Beijing, increasingly frustrated with Pyongyang's nuclear and missile activities, announced a suspension of all coal imports from the North until the end of the year -- a crucial source of foreign currency.

Haley deemed that measure -- which was in keeping with UN sanctions against North Korea over its nuclear program and missile program -- insufficient, saying that coal is "going in other ways."

"At some point, we need to see definitive actions by China condemning North Korea and not just calling them out for it," she said.