The US has warned of severe and swift consequences if Russia invades, including possible personal sanctions on President Vladimir Putin 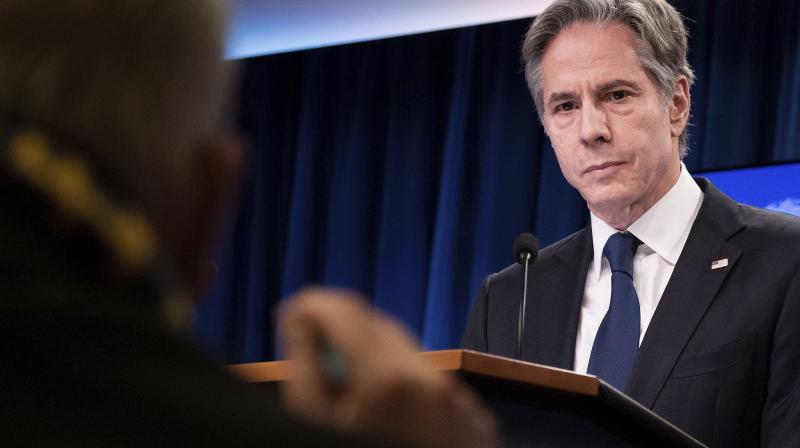 Secretary of State Antony Blinken speaks about Russia and Ukraine during a briefing at the State Department on Wednesday, Jan. 26, 2022, in Washington. (Brendan Smialowski/Pool via AP)

WASHINGTON: The United States on Wednesday rejected Russia's key demand to bar Ukraine from NATO and said it believed Moscow was ready to invade but offered what it called a new "diplomatic path" out of the crisis.

Secretary of State Antony Blinken said he would speak again in the coming days to Russian Foreign Minister Sergei Lavrov, as a separate initiative by France brought a promise by Moscow at least to keep talking to Ukraine's government.

One month after Russia put forward sweeping security proposals, having sent tens of thousands of troops to Ukraine's border, the United States delivered a reply in co-ordination with NATO allies and said it was ready for any eventuality.

"It sets out a serious diplomatic path forward should Russia choose it," Blinken told reporters of the US response, which he said would remain confidential.

He renewed an offer on "reciprocal" measures to address mutual security concerns, including reductions of missiles in Europe and transparency on military drills and Western aid to Ukraine.

But he made clear that the United States would not budge on Russia's core demand that Ukraine never be allowed to join NATO, the US-backed military alliance.

"From our perspective, I can't be more clear -- NATO's door is open, remains open, and that is our commitment," Blinken said.

Russia, which has a complicated historical relationship with Ukraine, has fueled an insurgency in the former Soviet republic's east that has killed more than 13,000 people since 2014.

Russia that year also seized Crimea after the overthrow of a government in Kyiv that had resisted efforts to move closer to Europe.

The United States has warned of severe and swift consequences if Russia invades, including possible personal sanctions on President Vladimir Putin, and NATO has put 8,500 troops on standby.

"While we are hoping for and working for a good solution -- de-escalation -- we are also prepared for the worst," NATO Secretary General Jens Stoltenberg said.

Blinken's deputy Wendy Sherman, who led a previous round of talks with Russia, said Putin seemed ready to invade despite the US warnings.

"I have no idea whether he's made the ultimate decision, but we certainly see every indication that he is going to use military force sometime perhaps (between) now and the middle of February," Sherman told a forum.

In another bid to defuse tensions, senior Russian and Ukrainian officials met for eight hours in Paris with representatives of France and Germany.

Dmitry Kozak, the Kremlin deputy chief of staff, said the talks were "not simple" but that another round would take place in two weeks in Berlin.

France said after the so-called Normandy Format talks that the envoys committed to a fragile July 2020 ceasefire in eastern Ukraine between government forces and pro-Moscow separatists.

"We need a supplementary pause. We hope that this process will have results in two weeks," Kozak said.

An aide to French President Emmanuel Macron stressed that the talks had been about resolving the separatist fighting in eastern Ukraine, not the threat of a Russian invasion.

But "the question was whether the Russians wanted to signal a thaw," he said, adding that the "difficult" discussions had ultimately resulted in something positive.

"In the current circumstances, we received a good signal," he said.

France and Germany have joined the United States in warning Russia against an invasion but have been less direct about sanctions.

Germany's new coalition government has sent mixed signals on whether it would sever the soon-to-open Nord Stream 2 pipeline from Russia, which will circumvent Ukraine to provide gas to Europe's largest economy.

US President Joe Biden, who spoke with European leaders by video-conference on Tuesday, said that any Russian military attack on Ukraine would trigger "enormous consequences" and could even "change the world."

Kremlin spokesman Dmitry Peskov, while brushing off the impact, warned that attempts to punish Putin personally would be "destructive."

The United States again encouraged its citizens to leave Ukraine, warning an invasion could be imminent.

But Ukraine's government, hoping to prevent panic, has played down the dangers and sought to offer ways out.

Ukrainian Foreign Minister Dmytro Kuleba told reporters the Russian troops posed "a threat to Ukraine" but that the numbers deployed were "insufficient for a full-scale offensive."

Andriy Yermak, an advisor to President Volodymyr Zelensky who took part in the Paris talks, wrote on Twitter that the meeting was "a strong signal of readiness for a peaceful settlement."

In an early move to de-escalate that was envisaged by France, Ukraine's government this week withdrew a bill in parliament governing the status of Russian-backed separatist provinces in the east of the country, which Moscow saw as violating previous commitments.

France is hoping that Russia will agree in turn to humanitarian measures such as prisoner exchanges in eastern Ukraine and the opening of checkpoints manned by the separatists.

But Zelensky has stood firm against another French suggestion of direct talks between Ukraine's government and the Russian-backed separatists.