The groom recalled greeting smiling guests in the afternoon, before seeing their bodies being carried out hours later. 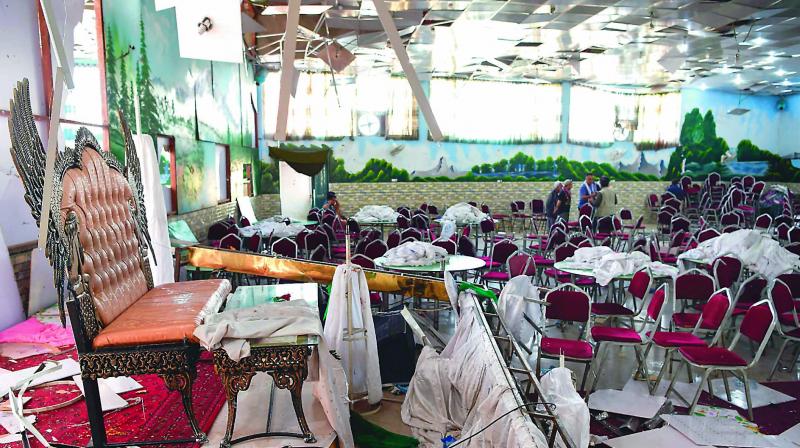 The remains of the wedding hall after the deadly bomb blast in Kabul on Sunday (Photo: AFP)

Kabul: Joy and celebration turned into horror and carnage when an Islamic state suicide bomber targeted a packed Afghan wedding hall, killing at least 63 people in the deadliest attack to rock Kabul in months, officials and witnesses said Sunday.

The massive blast, which took place late Saturday in west Kabul, came as Washington and the Taliban finalise a deal to reduce the US military presence in Afghanistan and hopefully, build a roadmap to a ceasefire.

The groom recalled greeting smiling guests in the afternoon, before seeing their bodies being carried out hours later.

The attack “changed my happiness to sorrow”, the young man, who gave his name as Mirwais, told local TV station Tolo News.

“My family, my bride are in shock, they cannot even speak. My bride keeps fainting,” he said.

“I lost my brother, I lost my friends, I lost my relatives. I will never see happiness in my life again.”

Interior ministry spokesman Nasrat Rahimi said a suicide bomber carried out the attack, with at least 63 people killed and 182 injured.

“Among the wounded are women and children,” Mr Rahimi said.

The wedding was largely a gathering of Shia Muslims, who frequently are targeted in Sunni-majority Afghanistan, particularly by the ISIS.