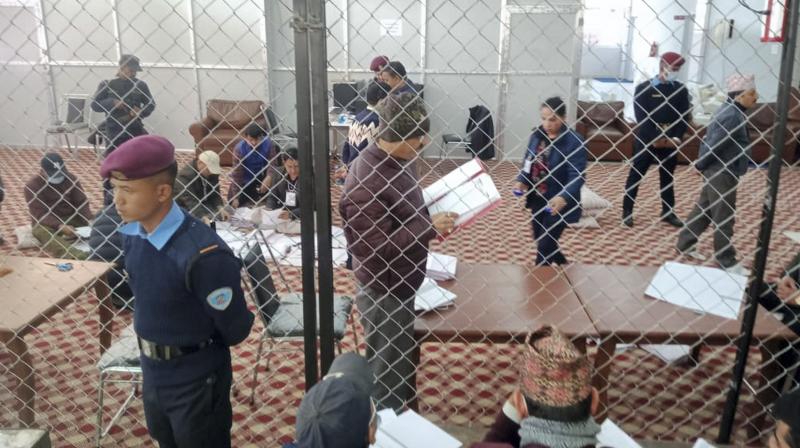 Counting of votes for the Nepal Parliamentary and Provincial Assembly elections underway, in Kathmandu, (PTI)

Kathmandu: Prime Minister Sher Bahadur Deuba was elected on Wednesday with a huge margin of votes from the Dadeldhura constituency in far west Nepal for the seventh consecutive time, with his Nepali Congress party leading in the election tally by winning 11 seats so far.

Elections to the House of Representatives (HoR) and seven provincial assemblies were held on Sunday. The counting of votes started on Monday.

Deuba secured 25,534 votes against his nearest rival Sagar Dhakal, 31, an independent candidate who received 1,302 votes. Deuba has never lost any parliamentary election in the five decades of his political career.

The 77-year-old Nepali Congress president Deuba is currently holding the post of Prime Minister for the fifth term.

Dhakal is a young engineer, who had a verbal squabble with Deuba during a public debate at a BBC's Sajha Sawal programme five years ago, after which he decided to challenge Deuba saying that now youths should get a chance in politics and senior people like Deuba should retire.

The ruling Nepali Congress has so far bagged 11 seats in the House of Representatives (HoR) while it is leading in 46 other constituencies.

The CPN-UML led by former prime minister K P Oli has so far bagged three seats and is leading in 42 constituencies.

Rastriya Prajatantra Party, CPN-Unified Socialist and Nagarik Unmukti Party have bagged one seat each. So far, 20 seats of HoR have been declared.