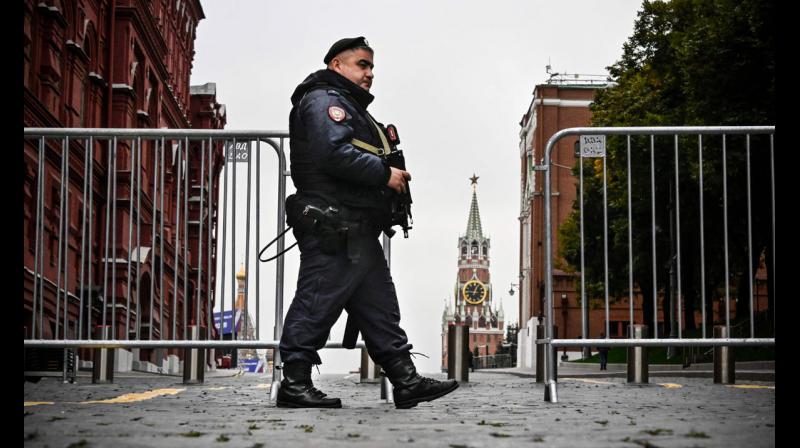 A policeman guards at the edge of Red Square in central Moscow on September 29, 2022, as the square is sealed prior to a ceremony of the incorporation of the new territories into Russia. (Photo: AFP)

MOSCOW: Russia will formally annex four regions of Ukraine its troops occupy at a grand ceremony in Moscow on Friday, the Kremlin has announced, after it suggested using nuclear weapons to defend the territories.

The threats from senior Russian officials have not deterred a sweeping counter-offensive from Kyiv, which has been pushing back Russian troops in the east and is edging nearer the Donetsk region city of Lyman that Moscow's forces battered for weeks to fully capture.

President Vladimir Putin's spokesman Dmitry Peskov said the annexation would be formalised at a ceremony in the Kremlin. The Russian leader will make a "major" speech, he added.

"Tomorrow in Saint George's Hall at the Grand Kremlin Palace at 15:00 (1200 GMT) a signing ceremony will take place on the incorporation of the new territories into Russia," Peskov told reporters.

The Kremlin-installed leaders of the four regions were gathered in the Russian capital on Thursday, a day after pro-Moscow authorities had appealed to Putin directly to integrate the territories into Russia.

Their nearly simultaneous requests to the Kremlin came after the four regions claimed residents had unanimously backed the move in hastily organised referendums that were dismissed by Kyiv and the West as illegal, fraudulent and void.

Ukraine after the so-called referendums said the only appropriate response from the West was to hit Russia with more sanctions and to supply Ukrainian forces with more weapons to keep reclaiming territory.

"Ukraine cannot and will not tolerate any attempts by Russia to seize any part of our land," President Volodymyr Zelensky said late Wednesday.

The four territories -- Kherson and Zaporizhzhia in the south; Donetsk and Lugansk in the east -- create a crucial land corridor between Russia and the Crimean peninsula, annexed by Moscow in 2014.

Together, all five make up around 20 percent of Ukraine, whose forces in recent weeks have been clawing back ground.

Kyiv's army in particular has been showing progress in the eastern Kharkiv region and recapturing territory in Donetsk, and military observers say Kyiv's forces are close to capturing Lyman.

"The enemy is carrying out regular attempts to encircle the city," a pro-Russian official in the Donetsk region, Alexei Nikonorov, told state TV on Thursday.

"At the moment, our units manage to repel all attacks," he claimed.

'I don't want to kill people'

Still, Russian forces are striking out along the entire frontline of Ukraine and officials in Kyiv said Thursday that Russian bombardments had killed three in the Dnipropetrovsk region, five in Donetsk and wounded seven in the Kharkiv region.

Along with threats to use nuclear weapons, Putin announced a mobilisation of hundreds of thousands of Russian men to bolster Moscow's army in Ukraine, sparking demonstrations and an exodus of men abroad.

On a bright morning in Mongolia's capital Ulaanbaatar, a young Russian fleeing Moscow's first military call-up since World War II had a stark answer for why he had left: "I don't want to kill people."

"It was very difficult to leave everything behind -- home, motherland, my relatives -- but it's better than killing people," the man in his 20s told AFP, speaking on condition of anonymity.

The exodus from Russia into Mongolia follows a similar trend in ex-Soviet countries like Georgia, Kazakhstan and Armenia.

EU member Finland is also affected and announced Thursday it would be shuttering its border to Russians with Schengen tourist visas beginning the next day.

Russia's move to annex the Ukrainian territories was met with the announcement from the United States of a new package of weapons and supplies worth $1.1 billion, including precision rocket systems, ammunition, armoured vehicles and radars.