Navalny has been a thorn in the Kremlin’s side for a decade, unusually durable in an opposition movement often demoralized by repressions 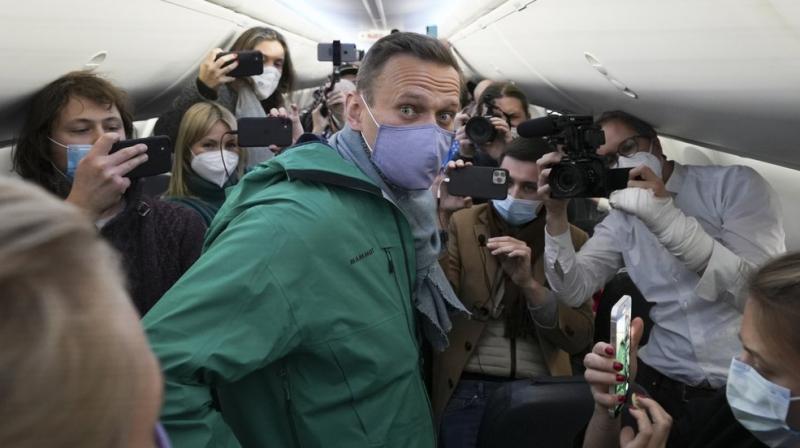 Kremlin critic Alexei Navalny is surrounded by journalists inside the plane prior to his flight to Moscow in the Airport Berlin Brandenburg (BER) in Schoenefeld, near Berlin, Germany, Sunday, Jan. 17, 2021. (AP /Mstyslav Chernov)

Moscow: Russian opposition leader Alexei Navalny was arrested Sunday at a Moscow airport as he tried to enter the country from Germany, where he had spent five months recovering from nerve agent poisoning that he blames on the Kremlin.

Navalny’s detention at passport control in Moscow’s Sheremetyevo airport was widely expected because Russia’s prisons service said he had violated parole terms from a suspended sentence on a 2014 embezzlement conviction.

The prisons service said he would be held in custody until a court rules on his case. No date for a court appearance was immediately announced. The service earlier said that it would seek to have Navalny serve his 3 1/2-year sentence behind bars.

Navalny, 44, who is President Vladimir Putin’s most prominent and determined foe, brushed off concerns about arrest as he boarded the plane in Berlin.

The arrest raises tensions in Russia as it approaches national parliament elections this year, in which Navalny’s organization is expected to be active in trying to defeat pro-Kremlin candidates. Navalny decided to leave Berlin of his own free will and wasn’t under any apparent pressure to leave from Germany.

“This is a real act of bravery for Alexei Navalny to return to Russia, given that government agents already tried to kill him once,” Human Rights Watch Executive Director Kenneth Roth tweeted. “But he understandably wants to be part of the pro-democracy movement in Russia, not a dissident in exile.”

U.S. President-elect Joe Biden’s pick for national security adviser called on Russian authorities to free Navalny. “Mr. Navalny should be immediately released, and the perpetrators of the outrageous attack on his life must be held accountable,” Jake Sullivan said in a tweet.

The outgoing U.S. secretary of state, Mike Pompeo, said the U.S. “strongly condemns” he decision to arrest Navalny and called his detention “the latest in a series of attempts to silence Navalny and other opposition figures and independent voices who are critical of Russian authorities.”

Putin’s spokesman, Dmitry Peskov, responded to a question about the arrest by saying “Was he arrested in Germany? I’m not up to date,” according to the online news site Podyom. Peskov, like Putin, is noted for avoiding saying Navalny’s name.

Navalny has sizable popularity in Moscow. Many supporters on Sunday went to Vnukovo airport where his flight was scheduled to land, though it was diverted to Sheremetyevo without explanation.

The OVD-Info organization that monitors political arrests said at least 53 people were arrested, including Navalny supporters and journalists, at Vnukovo, where where the arrivals hall had been blocked off and prisoner transport vehicles were parked outside. There were at least three detentions at Sheremetyevo, it said.

The independent newspaper Novaya Gazeta and opposition social media reported Sunday that several Navalny supporters in St. Petersburg had been removed from Moscow-bound trains or been prevented from boarding flights late Saturday and early Sunday, including the coordinator of his staff for the region of Russia’s second-largest city.

Navalny fell into a coma while aboard a domestic flight from Siberia to Moscow on Aug. 20. He was transferred from a hospital in Siberia to a Berlin hospital two days later.

Labs in Germany, France and Sweden, and tests by the Organization for the Prohibition of Chemical Weapons, established that he was exposed to a Soviet-era Novichok nerve agent.

Russian authorities insisted that the doctors who treated Navalny in Siberia before he was airlifted to Germany found no traces of poison and have challenged German officials to provide proof of his poisoning. Russia refused to open a full-fledged criminal inquiry, citing a lack of evidence that Navalny was poisoned.

Last month, Navalny released the recording of a phone call he said he made to a man he described as an alleged member of a group of officers of the Federal Security Service, or FSB, who purportedly poisoned him in August and then tried to cover it up. The FSB dismissed the recording as fake.

Navalny has been a thorn in the Kremlin’s side for a decade, unusually durable in an opposition movement often demoralized by repressions.

He has been jailed repeatedly in connection with protests and twice was convicted of financial misdeeds in cases that he said were politically motivated. He suffered significant eye damage when an assailant threw disinfectant into his face and was taken from jail to a hospital in 2019 with an illness that authorities said was an allergic reaction but that many suspected was poisoning.

A lawyer by training, he began his rise to prominence by focusing on corruption in Russia’s murky mix of politics and business. In 2008, he bought shares in Russian oil and gas companies, so he could push for transparency as an activist shareholder.

Navalny’s work to expose corrupt elites had a pocketbook appeal to the Russian people’s widespread sense of being cheated. Russia’s state-controlled television channels ignored Navalny, but his investigations of dubious contracts and officials’ luxurious lifestyles got wide attention through the back channels of YouTube videos and social media posts that often showed his sardonic sense of humor.

In 2013, he placed second in the race for Moscow mayor behind the candidate of Putin’s power-base United Russia party. That established him as a formidable force and a worry to the Kremlin.

He intended to run for president in 2018, but was kept off the ballot because of his previous criminal convictions. His own legal obstacles and the widespread obstruction authorities set before other independent candidates seeking public office led Navalny and his organization to adopt a new strategy for the 2019 Moscow city council elections.

The “Smart Vote” initiative analyzed which candidate in each district appeared to have the best chance of beating United Russia’s pick and tried to drum up support for that candidate.

The initiative appeared to be a success, with nearly half of the city council seats going to “systemic opposition” candidates, although its effectiveness couldn’t be quantified. Navalny intends to redeploy the same strategy in this year’s national parliament elections.