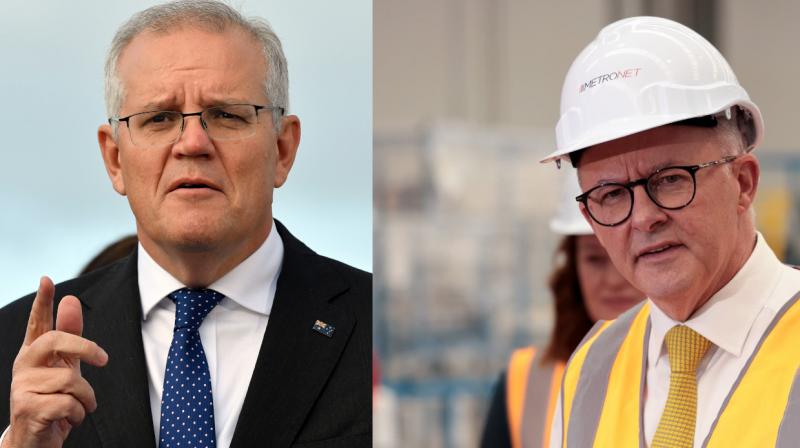 Sydney/Canberra: With the opinion polls suggesting that a decade of the conservative rule could end as Australia goes to the polls on Saturday, and surveys consistently show the centre-left Labour Party is ahead, a government led by Labour leader Anthony Albanese, that could be more climate-friendly and less hostile towards China, looks like a real possibility.

But pugilistic Prime Minister Scott Morrison, who leads a conservative coalition, appears to be rapidly closing the gap as election day nears.
There is a lot of speculation here on who will represent Australia at the Quad summit that is taking place in Tokyo just days after the election, on May 24, with US President Joe Biden, Prime Minister Narendra Modi and Japanese PM Fumio Kishida.

Prime Minister Scott Morrison on Wednesday would not say who might represent Australia in Tokyo. He said there were “conventions in place” to deal with the election but did not elaborate on how those conventions would work if the result were close. “I’m sure depending on the outcome of this Saturday’s election that they’ll be put in place,” Morrison said.

Albanese said Wednesday he will begin rebuilding trust in his nation if he wins and will attend a summit with the US, Indian and Japanese leaders in Tokyo just three days later. Albanese said he will be “completely consistent” with the current administration on Chinese competition in the region if he goes to the summit of the Indo-Pacific alliance on Tuesday.

Albanese has said he will have himself sworn in as PM as early as Sunday or Monday in order to attend the summit. “I will visit the Quad and renew my acquaintance with President Joe Biden but also meet, very importantly, with Japanese Prime Minister Fumio Kishida and Indian Prime Minister Narendra Modi who are important friends of Australia,” Albanese told The Australian newspaper.

In case the election result is very close, and the winner is uncertain, Morrison and Albanese could go to Tokyo together, a constitutional expert suggested.

“The caretaker conventions in those circumstances would normally dictate that you can’t go around doing significant things, making policy announcements and that sort of stuff,” she added.

The published conventions provide a range of options for a caretaker PM undertaking an overseas visit or international negotiations. The PM could adopt “observer status” at the Tokyo summit or seek Opposition support for any negotiating positions.

Australian Opposition Senator Penny Wong said she would accompany Albanese to Tokyo as foreign minister if their centre-left Labour Party wins. “The first visit will be to Japan for the Quad leaders’ meeting which a number of foreign ministers are also attending,” Senator Wong told Australian Broadcasting Corp last week.

“My hope would have been, and Anthony has said if we were elected his first visit and certainly my first visit would be to Indonesia. But obviously the first visit for him overseas would be the Quad leaders’ meeting in Japan,” Senator Wong said.

Indonesia is traditionally the first overseas stop for a new Australian PM to underscore the importance of that bilateral relationship. It’s usually clear on the night of Australian elections which party will win a majority of seats in the House of Representatives and form the government. But the opinion polls suggest this election will be close and could result in a hung Parliament in which neither the conservative coalition nor the Labour Party holds a majority.