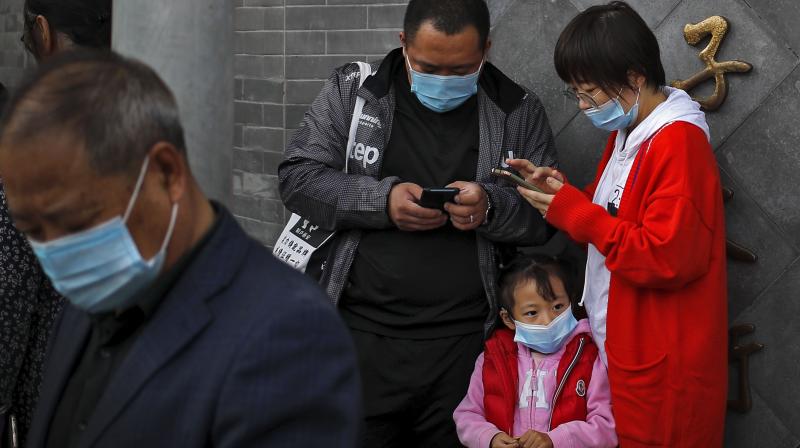 A child wearing a face mask to help curb the spread of the coronavirus looks as masked people browsing their smartphones near Forbidden City in Beijing. (AP)

Xinjiang health authorities found 137 asymptomatic cases on Sunday amid a testing drive for the 4.75 million people in the Kashgar area triggered by an asymptomatic infection in a 17-year-old female garment factory worker reported on Saturday. It was not clear how she was infected, though all of the new cases were linked to the garment factory.

The woman’s case was discovered during routine testing but it was not clear why she was subject to such testing, Chinese media reported quoting health officials.

Contact tracing work to locate the origin of the outbreak is ongoing, the reports said.

A total of 20 new confirmed and 161 new asymptomatic cases were reported in the mainland on Oct. 25, China’s National Health Commission said in a statement.

The number of new symptomless infections was the highest since China began publishing daily counts starting from those reported on March 31.

More than 2.84 million people in the Kashgar area had already been tested for COVID-19 as of Sunday afternoon and the rest expect to be completed by Tuesday. The scale and speed of the testing is in line with those seen during other outbreaks including the most recent one in Qingdao earlier this month.

Though the number of new COVID-19 cases are down sharply in mainland China from the peaks seen in February, Beijing is wary of another wave of infections and maintains mass and rapid testing capabilities.

The total number of confirmed COVID-19 cases in mainland China to date now stands at 85,810, while the death toll remained unchanged at 4,634.