Chhichhore movie review: All about losers this time!

Singh has had a successful run at the box office, but needs to grow as an actor if he wants to stay longer. 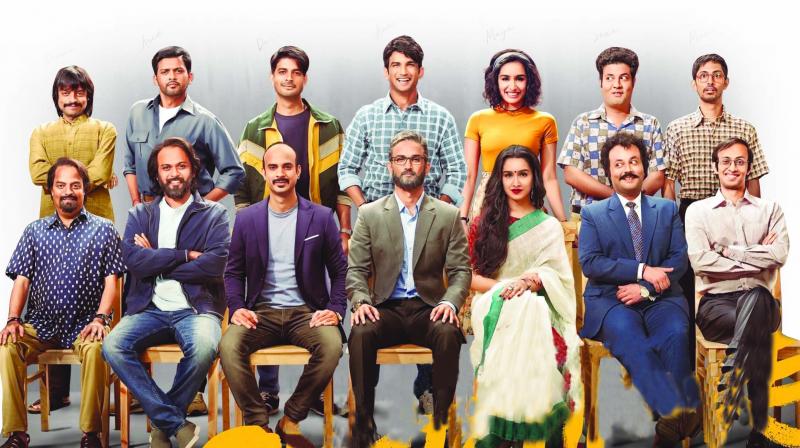 Chhichhore is the kind of film where it’s the characters (and not necessarily the actors) which rise above the script that tends to be repetitive, or not too subtle, and often runs out of any freshness to deal with its overall objective.
Rating:

We all know that if one is studious and serious about lectures, then college is painfully stale, and mostly unfunny, and I can’t think of a single reason why you should sit through such tedious classes? But there’s another side to it too. College friendships and romances are so much enjoyable, and never go out of vogue, and films focusing on themes revolving around all the camaraderie and bonhomie seldom go wrong. In such narratives, some shenanigans go down, and everyone has a wacky time too. At least, if the writing is good, and the characters don’t go over the top, it can be a fun watch, for sure. Nitesh Tiwary’s second directorial after Dangal, Chhichhore follows the story of a group of friends from engineering college and progresses into their middle-age life with dollops of jokes thrown in that are mostly culled from the lives of many youngsters in professional colleges. The premise is certainly sound — four college buddies reuniting some two decades later not just to reinforce their strong bonds, but to help one of the affected among them tide over a crisis. That it jumps into an area with sudden sentimentality infuses it with an egregiously unconcealed and thin sensibility that goes on to eventually remove some of its few positive attributes.

To be fair, the trio of writers Piyush Gupta, Nikhil Mehrotra and Tiwary himself do give you more than a glimpse of the way small-town boys (there aren’t too many girls seen on such campuses) and some coming-of-age young men normally behave. But with only a few genuinely funny, some accidental laughs and a dash of half-hearted sincerity.

As it starts off on a college campus where students are seen having midnight fun splashing bucketful of water at one another, the film seems settling in for a comic caper. Soon, though, it takes a time leap where one of the four friends, Ani or Anirudh (Sushant Singh Rajput), is seen as a middle-aged single father and is in his home where he lives with his teenaged son Raghav (Mohammad Samad).

As it touches upon the age-old fear of teenagers being “losers” that has afflicted them from time to time, it becomes rather too ambitious as we learn about Ani and his divorced wife Maya (Shraddha Kapoor) being great in their respective academic careers.

A bedridden, bandaged and virtually incapacitated Raghav battling for life keenly listens to the detailed sessions as one by one his father and his father’s buddies narrate incidents that go on to prove that each one of them had vices and thus, were dumped into H4 hostel which was meant only for all the losers who came last in the college competition named GC General Championships. Raghav is all ears even as doctors attending to him keep reminding the parents that he continues to be critical and needs to be operated upon yet again. After being fed up with the stigma of failure, the losers are bent upon proving their true potential of being of some worth, and promise to try their best 30 sports. Obviously, they wish to rewrite their own fate, and decide to alter the narrative. While the flashbacks continue to take you back, many of the present day crisis and other dilemmas in the present are shown as parallels juxtaposed to demonstrate and substantiate a point — that losing is not the end of the world. Neither is losing in life an assurance of remaining a loser permanently.

Chhichhore is the kind of film where it’s the characters (and not necessarily the actors) which rise above the script that tends to be repetitive, or not too subtle, and often runs out of any freshness to deal with its overall objective. Maybe Tiwary wanted to do a 3 Idiots that became such a cult film in its time on the subject of youth who want to do what they truly want to do. Though later we do see some of these “losers” discussing grand plans in their boardroom meetings, this is one film that doesn’t give us winners — it has mostly losers who are always seeking attention and are desperate failures. It does looks relatable for many of us on that count.

Singh has had a successful run at the box office, but needs to grow as an actor if he wants to stay longer. As the forty-something father, neither his prosthetic look nor his sudden quiet and sober act is impressive. Kapoor has little to do, save to look cute in college, and attractively appealing as a middle-aged mama. She doesn’t have anything funny to do either.

Bolstering the futile obsessive mania of the students to excel in academics as the underlying message, or that being ordinary is not a crime, the film goes on to have its spotlight on sports as an alternative in some way. And when eventually, nearly all of them become hugely successful corporate guys, it also tries to convey that outshining other students in school or college by coming out trumps is not a certification for future success as well.

All the other actors in the supporting cast have far to do with some memorable lines for you to chuckle on. Sharma as the sex-obsessed Sexa nails some of the adult jokes with elan. By the way, there are quite a few double meaning words and sexual innuendos that are bound to have the audience laughing out riotously.

What failed to move me was the lack of emotional investment on the part of the actors, mainly the lead stars, who seem to be mouthing lines only from the outside but not with any far reaching intensity. Ani’s emotional belief that the friends’ storytelling would actually heal his son battling for life may be novel but will be pooh poohed in the medical fraternity. Some of the jokes are juvenile, while some look typical of any professional college — one-liners, pranks and wisecracks (mostly by Sharma) are very amusing too.

The saviour in the film — as I mentioned before — in the 145-minute film that dodges and weaves through many clichés and familiar tropes — is that some of the characters are played by decent actors.