Two members of his family have been diagnosed positive 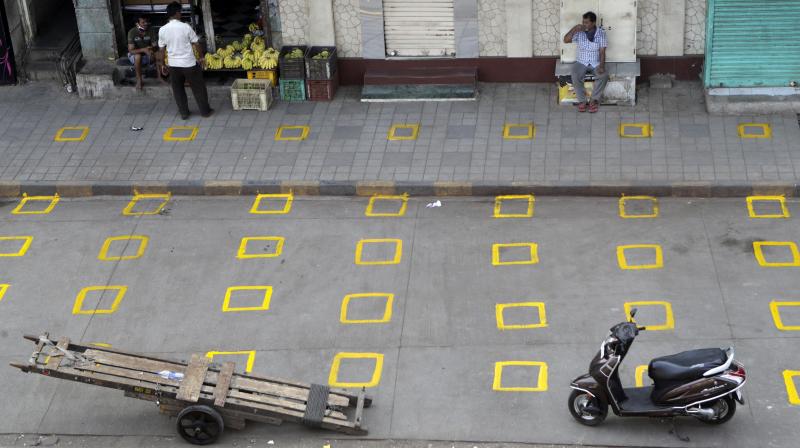 Positions are marked for maintaining physical distance at a market place in Mumbai, March 27, 2020. (AP)

Mumbai: A senior doctor of Mumbai died of Covid-19 infection early Friday morning at the Hinduja Hospital less than two weeks after his grandson returned to the city from the United Kingdom.

Two members of the deceased doctor’s family have tested positive and were taken to the Kasturba Hospital.

According to sources, the grandson of the doctor showed mild symptoms of Covid-19 infection at the airport when he landed from the UK on March 12, but he successfully convinced the health officers that he would stay in quarantine for the next 14 days.

The 85-year-old doctor developed a cough four days ago. Tests at a private lab returned a positive and the doctor was admitted to Hinduja hospital. He succumbed on Friday. “The patient had diabetes and also had had a pacemaker installed. He was ailing with cardiac ailments,” the Maharashtra health department said in a statement.

Dr Daksha Shah, deputy director of the BMC health department, said she had no idea why the grandson was allowed to go by officials at the airport.

Dr Vernon Desa, director (medical governance and clinical compliance) at Saifee Hospital said, “The deceased underwent a CT scan at Saifee Hospital and was diagnosed for Covid19. He was transferred to the special isolation facility at the P.D. Hinduja Hospital where he subsequently died. All containment and surveillance measures have been implemented to ensure the safety of our staff, patients, and visitors.”