All the deaths were in the epicentre of the virus, Hubei Province and its capital Wuhan, which continued to be ground zero of the COVID-19 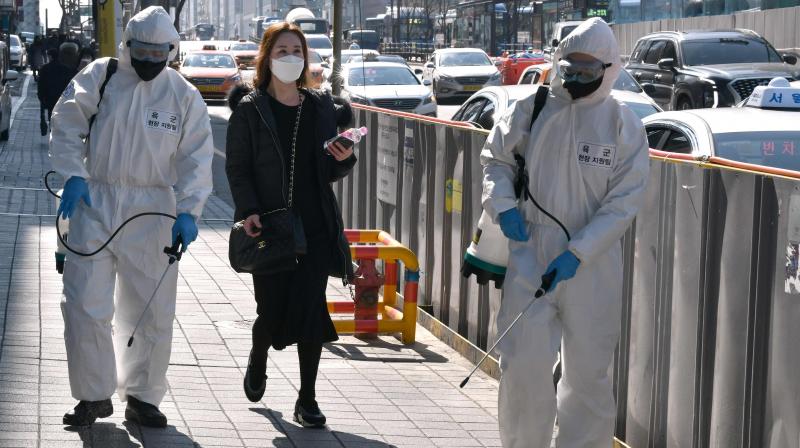 A woman walks past South Korean soldiers wearing protective gear as they spray disinfectant on the street to help prevent the spread of the COVID-19 coronavirus, at Gangnam district in Seoul. AFP photo

Beijing/Seoul: The death toll of coronavirus in China has crossed 3,000 with 31 new fatalities and the total number of confirmed cases jumped to over 80,400, while Chinese President Xi Jinping has called for undiminished vigilance, saying the situation in virus-hit Wuhan still remains severe despite positive progress.

China's National Health Commission said on Thursday that it received reports of 139 new confirmed cases of the novel coronavirus infection and 31 deaths on Wednesday on the Chinese mainland.

All the deaths were in the epicentre of the virus, Hubei Province and its capital Wuhan, which continued to be ground zero of the COVID-19.

Also on Wednesday, 143 new suspected cases were reported while the number of severe cases decreased by 464 to 5,952, the NHC said, adding that 522 people were still suspected of being infected with the virus.

The overall confirmed cases on the Chinese mainland have reached 80,409 by the end of Wednesday.

This included 3,012 people who have died of the disease, 25,352 patients still undergoing treatment and 52,045 patients who have been discharged.

Also on Wednesday, two imported cases (people arriving from abroad) of the novel coronavirus infection were reported on the mainland, all of which were in Zhejiang Province.

By the end of Wednesday, 20 imported cases have been reported, the commission said.

Forty-three patients in Hong Kong, nine in Macao and 12 in Taiwan have been discharged from hospital after recovery.

In Hubei province, from where the COVID-19 originated in December reported 134 new confirmed cases of the novel coronavirus infection and 31 new deaths on Wednesday, the local health commission said.

The latest report brought the total confirmed cases in the hard-hit province to 67,466 and that of total deaths to 2,902, which included 2,305 fatalities in Wuhan.

The province also saw 1,923 patients discharged from hospital after recovery on Wednesday, bringing the total number of discharged patients in the province to 40,479.

Among the 20,765 hospitalised patients, 4,747 were still in severe condition and another 1,041 in critical condition, it said.

Meanwhile, Chinese President Xi Jinping has called for undiminished vigilance on the prevention and control work of the COVID-19 as the situation in the Wuhan City and Hubei Province remains severe.

After arduous efforts throughout the country, the current situation of the epidemic prevention and control has continued to improve, and production and people's living have been recovering, Xi said in a meeting.

By the end of Wednesday, there have been 12,600 confirmed cases of the coronavirus outside China, with over 214 deaths, statistics from the World Health Organisation showed Thursday.

In the past 24 hours, 2,103 newly confirmed cases outside China have been reported and four new member states—Argentina, Chile, Poland and Ukraine—have reported cases of COVID-19.

Japan confirmed over 1,037 coronavirus cases, and so far 12 people have died due to the infection.

Italy reported a total of 107 deaths of the deadly coronavirus, taking the total number to 3,089.

The total stood at 5,766, the Korea Centers for Disease Control and Prevention said, with 35 deaths.

So far 36 countries and regions have imposed a blanket entry ban on people who have recently been in the South, according to the foreign ministry in Seoul.

Nearly 90 percent of the national total come from the southern city of Daegu — with more than 4,300 cases confirmed there — and the neighbouring North Gyeongsang province.

The outbreak in the city of 2.5 million among Shincheonji members began with a 61-year-old woman, who developed symptoms on February 10 and attended at least four services in the city.

The government proposed an extra budget of 11.7 trillion won ($9.9 billion) on Wednesday to address the epidemic's impact and improve the country's infectious disease prevention system.