The mammoth task of conducting elections in a diverse country like India has always remained a challenge for the EC for years. 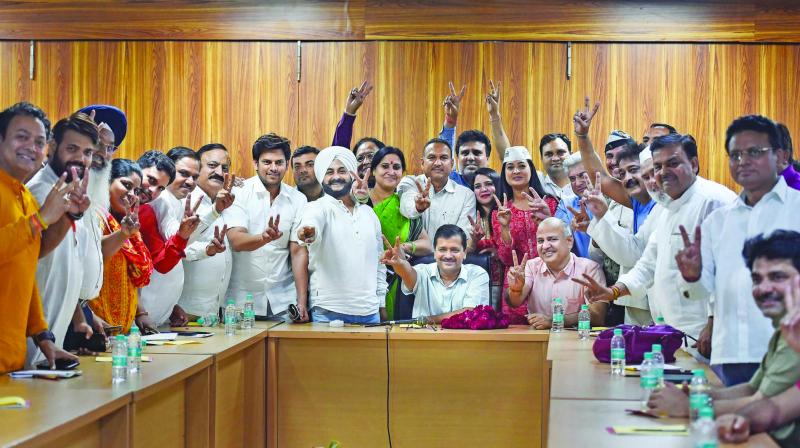 Despite all the good work it has done, the Election Commission of India’s impartiality and credibility has now come under scrutiny with several political observers and analysts suggesting that it is being influenced by the ruling party.

Mumbai: The Election Commission (EC) was dragged into a fresh controversy recently when the Bharatiya Janata Party’s (BJP) IT cell chief, the Karnataka Congress IT cell chief and an English news channel declared the election date for the state before the official announcement. Social media was flooded with messages not only slamming the political leaders but also questioning the EC over the
crucial information leak.

In the recent past, the EC has found itself dragged into many controversies like the disqualification of the Aam Aadmi Party (AAP) members, who were later reinstated by the Supreme Court or delaying the announcement of dates for the Gujarat polls. The Karnataka poll date is not the only case where the EC’s impartiality has been questioned. In fact, experts and political observers are divided over the EC’s credibility and the influence of the ruling party on its functioning.

The mammoth task of conducting elections in a diverse country like India has always remained a challenge for the EC for years. Last year’s Bollywood film Newton also highlighted the efforts by EC officials to conduct free and fair elections in the remote, naxal-infested area of Chhattisgarh. There are many such stories of the efforts taken by the EC to reach out to voters against all odds, including difficult terrain, lack of infrastructure and inadequate manpower. However, off late, a debate has started in political circles on whether the EC has become a political tool in the hands of the ruling party.

Political commentator and retired head of the department of politics, Mumbai University, Prof. Surendra Jondhale has criticised the EC’s style of functioning. “The recent cases of violation of the EC’s own norms indicate that the institution is eroding its constitutional credibility and morality. In the case of the disqualification of AAP MLAs, no primary inquiry was conducted by the EC. The SC pointed out the same thing while reinstating them. It is not the first time that the EC’s stand has been questioned. But now its functioning has become openly questionable,” he said.

Commenting on whether the EC is under the influence of the ruling party, he said, “Any ruling party will have its influence on the EC. But it was not visible so far or made so obvious. But now doubts have been raised by people as things are happening repeatedly,” he said.

However, Sharad Kumar from the Association for Democratic Reforms has lauded the EC for being the “only” impartial institution in the country. “Foreign countries give the example of the Election Commission of India for being credible and impartial. This institution has been nurtured in this way for years. The allegations that we see today against it, are merely political. So far, only one party had been ruling the country and now another has taken over. Hence, all other Opposition parties have come together to question the credibility of the EC. But one or two instances do not belittle its credibility,” he said. Mr Kumar, who closely follows the general as well as the local election process and engages in analysis of candidates, said the EC is an institution that is open to reforms to make the election process better and transparent. “The EC has brought many reforms since its inception. But parties oppose these reforms, as they are not in their favour. The Supreme Court however, has been supportive of these reforms for free and fair elections,” he said.

As per the EC website, the institution does not allow any interference in the election process. “In the performance of its functions, the EC is insulated from executive interference. It is the commission which deci-des the election sche-dules for the conduct of elections, whether general elections or byelections. Again, it is the EC which decides on the location of polling stations, assignment of voters to the polling stations, location of counting centres, arrangements to be made in and around polling stations, counting centres and all other allied matters,” the site reads.

Not withstanding the criticism about its credibility, the EC in June last year wrote to the law ministry seeking powers for contempt and to act against defamation. The ministry has not replied as yet, but legal experts are sceptical about any such possibility. A similar demand had been raised by the EC some 30 years ago but the law ministry did not accede to it.  “The existing law does not give the EC any power to exercise contempt. The only power for contempt is with the court of this country and that also contempt of the court order. If a person is committing contempt of a court order then only contempt action will follow, which involves civil and criminal imprisonment or fine. The EC has no power of contempt. The EC under the power of law is a mute spectator. These issues ultimately will have to be decided by the court,” said Sujay Kantawala, senior lawyer practicing at the Bombay high court.

There is no doubt that the EC is facing one of the worst phases of the perception battle. For a healthy democracy, it is of paramount importance that the EC remains independent. Shutting down people from criticising the EC cannot be the solution. There are examples from the past such as former CECs R.V.S. Peri Sastri, T.N. Seshan and J.M. Lyngdoh, who took decisions against the whims and fancies of ruling parties. Once again, the need of the hour is to uphold the EC’s integrity by remaining vigilant and autonomous for the sake of democracy.

Run-ins with CEC
1989: The Congress government led by Rajiv Gandhi appointed two election commissioners on the eve of the 1989 general election.
It was seen as an attempt to peg back then-chief EC R.V.S. Peri Sastri, who had resisted the government’s attempts to dictate terms to the EC.
1990: The National Front government came to power and removed the two commissioners appointed by the Congress government.
1993: The then-Narasimha Rao government once again appointed two ECs. The move was aimed at clipping the wings of T.N. Seshan.
2002: Then-Gujarat chief minister Narendra Modi dissolved the Gujarat Assembly to force early elections and capitalise on the sentiments stirred up by the 2002 riots. However, then-CEC J.M. Lyngdoh ruled out early elections on the grounds that the situation was not conducive for free and fair elections.

Rage against the voting machine
The Election Commission of India (EC) has been in the eye of a storm of late with several netas and tech gurus questioning the veracity of the much-touted electronic voting machines (EVM). No sooner were the BMC polls results announced on February 23, 2017 than independent candidate Shrikant Shirsat claimed that the EVMs in his polling booth was tampered since he did not get a single vote — not even his own vote. However, the EC verified the issue and termed his claims as baseless. Mr Shirsat is not the sole ‘EVM basher’ or ‘hackathon’ claimer. There are scores like him from different political parties.

EVMs manufactured in 1989-90 were used on experimental basis for the first time in 16 Assembly constituencies in the states of Madhya Pradesh (five), Rajasthan (five) and NCT of Delhi (six) at the General Elections to the respective Legislative Assemblies held in November 1998. However, their credibility has always been at stake.

Terming the whole controversy ‘hollow’, former Maharashtra election commissioner Nand Lal endorsed the use of the EVMs. “No allegations have been proved so far against the EVMs. The EC had posed an open challenge to all political parties to prove hacking or tampering of the machines, but no party could prove it. The EVM is not connected to outside instruments hence hacking is impossible,” Mr Nand Lal said.

He added that the machines were introduced to prevent booth capturing, bogus and forceful voting. “The machine can be captured only if presiding officer and all polling agents are in connivance. But its highly impossible as the agents belong to different parties,” Mr Lal said.

Some strongly support the good ol’ ballot paper system. Professor Hemantkumar Shah from the Gujarat University said, “The mismatch between votes polled as per the information given by EC on election day and votes counted in the EVMs at the time of vote counting was quite evident at many constituencies in Gujarat during the recent polls.”

Mr Shah added that when the BJP was in the Opposition, it had raised the issue of EVM hacking. G.V.L. Narasimha Rao has even written a book opposing EVMs. BJP leader Subramaniam Swamy had filed a petition challenging the use of EVMs in the Supreme Court in October 2013. Now, the Congress too wants to have ballot paper system back. The BSP and SP to made EVM hacking claims after the UP Assembly elections results. Former bureaucrat Nand Kumar said the EVMs will continue. “So what if other countries are still going with paper ballot, there are many countries which have adopted EVMs. In fact, the Voter Verifiable Paper Audit Trail (VVPAT) was introduced to dispel any doubt about EVMs. They are excellent machines that help in saving time and prevent manipulation,” he said.

The issue is pending before the Supreme Court, which recently observed, “Technically, we agree that any technology can be tampered with... the EVM itself was introduced to stop larger evils like booth capturing. This is a work in progress”.

Sure, EVM is a work in progress and the way forward may not be to junk it, but the EC will definitely have to take few measures to ensure that any attempt to tamper with the machines is prevented or detected on time.