The failed Assam NRC exercise should jolt the government into realising the disastrous effects if implemented nationally. 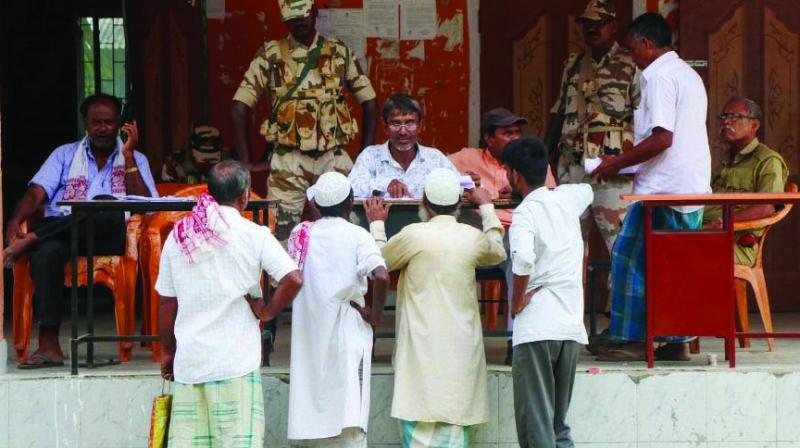 People enquire about the documents to be submitted at a foreigners tribunal in Assam. (Photo: PTI)

Assam witnessed a massive citizen-verification exercise, involving over 50,000 personnel, and costing Rs 1,600 crore to the national exchequer. It came a cropper. Nineteen lakh people were rendered stateless. Most of those excluded turned out to be from the majority community, which politically embarrassed its initiators. The trauma the whole exercise  inflicted on them can be imagined. Ask a school student what it feels like to be sent out of a classroom for a period. Then guess for yourself what it means to be plucked out by the iron-handed monster of a state from where you lived, rooted for years and decades, and cast into the limbo of statelessness.

One would have thought that the Assam NRC exercise was a case for pausing to re-think the logic and dynamics of the exercise. Not so, for our redoubtable Home Minister, to whom it is, instead, an excuse for upgrading it to a national exercise. The logic is: because we couldn’t pull it off in respect of a small state with 35.4 million people, let’s extend it to 1,300 million people spread all over India. One can only hope that, unlike in the case of Assam, this mammoth exercise, if undertaken, would not be found worse enough to warrant a repeat verification. The country can ill-afford it.

The idea of the NRC per se is welcome, though where it should figure in our order of priorities is a matter of opinion. Strictly from a political point of view, the need to safeguard the demographic purity of the country, warding off cross-border migrations, is a sensible responsibility. What queers up its political pitch is its presumed bearing on the electoral fortunes of parties. Aside of this, the Indian culture has been for millennia distinguished itself for its hospitality. Welcoming and ministering to guests — a guest being free of all labels — was, in our culture, a spiritual value (Atiti devo bhava). What underlies this worldview of genial hospitality is the insight that we are but wanderers on the earth, and that our ownership of land is an illusion, a play of maya. In comparison, the Semitic faiths — Judaism, Christianity, Islam — were more rooted in the land, the reason they became more inhospitable to diversities. This negativity to the ‘other’ went deep into European nationalism, plunging Europe, and the rest of the world, into two World Wars.

Somehow, it doesn’t carry conviction when the ruling dispensation rationalises its commitment to pan-Indian-NRC on the alibi that it was from the UPA bottle that the genie of NRC sprang out, in the first place. As poet Kabir said, the public perception of an action is coloured by who undertakes it. The Hindutva vision of India hinges on the idea of racial and cultural purity. It is imbued with visceral negativity to minorities, especially the Muslims. No matter how it is sought to be explained away, this bias is reflected in the intent of the Citizenship Amendment Bill that, via a tenuous logic, excludes Muslims from its ambit. It is difficult to see how a legislation vitiated by religion-based discrimination can pass muster in a court of law.

The compulsion for the NDA government to unfurl the panoply of the NRC nationally is at its zenith at the present time. This exercise, when slanted ideologically, is sure to stoke nationalist sentiments across India. The key to this is found in Prime Minister Narendra Modi’s image as the crusader against ‘corruption’. In a secular context corruption pertains to material misappropriations. In the ideological environment of Hindutva, ‘corruption’ has cultural, religious and ethnic overtones. It is quite easy to persuade the masses that the presence of the ‘other’ is a source of corruption. This is the logic at work in projecting Congress-mukt Bharat as a national goal; its resonance stemming from the stigmatisation of the Congress — the political other — as an embodiment of corruption.

Otherness is corruption. In such a context, the NRC exercise appeals — despite its unimaginably high cost and daunting logistic challenges — emotionally to a nation-wide constituency.

It is almost certain that when the home minister announced in Parliament that the NRC will cover the whole of India, he was already in the know of the worrisome state of our economy. Today we know that the GDP growth for Q2 stands at 4.5 per cent; a formidable half per cent below the worst-case scenario that the former finance minister, P. Chidambaram, had predicted it would be. The developmental track-record of the Modi-Shah dispensation, index after index, belies the grand-standing in that connection. Popular political goodwill can melt in quick time under the heat of harsh lived realities. Monstrous over-expectations, raised and belied, can turn into a monster of public disenchantment. More so today when sentiments and attitudes, if Alvin Toffler is believed, are disconcertingly short-lived. The failure to deliver needs to be, hence, obfuscated from public awareness with a series of adrenalin shots: surgical strikes, Balakot attack (ghar, ghar ghuskarke maroonga), abrogation of Article 370 and the re-hashing of a state into centrally administered territories, and so on. ‘Chanakyashastra’, if you like, of this kind is like a top: it has to spin to stand upright. To stop spinning is to tip and to fall aside.

It yields electoral dividends for a party in the short run. But, it turns good governance into a teasing illusion for the people. Nobody’s quality of life improves because of a surgical strike, or a thousand of its kind. The security environment neither of Jammu and Kashmir nor of the rest of India improves because a state has been sliced down the middle or unequally. The cohesion of India as a multi-cultural kaleidoscope of human collectivity, distinguished for its unity-in-diversity, tolerance and socio-spiritual resilience, will gain nothing because of an NRC.

Instead, we could even end up as losers in the long run. The least of that loss will be the diversion of the sorely needed resources from the urgent priorities on the ground to the NRC white elephant. The real loss will be the erosion of our emotional and social cohesion as a nation. Getting infected with phobias and negativities towards those different from oneself is not a sign of vitality but of paranoia. Diversity is not a liability. It’s an asset. I was associated with St. Stephen's College, Delhi, for four decades. Its strength and greatness is that it is a microcosmic representation of the diversity of India. About 37 languages are spoken on its campus! Students from all states and UTs live on the campus. I cannot think of an educational institution that is homogenised in the composition of its student body or faculty in terms of language, religion, social status or gender.

So, there is this little thing that history tells us. In the past, whenever Census exercises were undertaken by imperialistic states, they presaged military campaigns. Doing a head count is nothing in itself. The all-important question is why it is done. The casting away of a few million human beings into the misery of statelessness may seem, for the time being, a shot in the arm for hot-air jingoism. But, surely, no one expects that the morsels of food thus saved, or the land freed up from ‘illegal occupation,’ will go to the enhancement of the citizens of India. We could be, for all we know, poorer for becoming that much more narrow-minded and intolerant of differences.