The top court asserted that in no circumstance the forest land or the customary right of the tribals be encroached by “mighty people”. 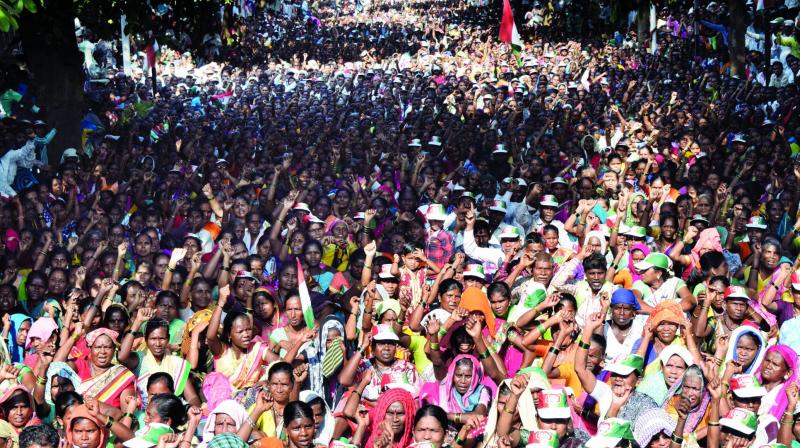 Farmers and tribal community people across the state of Maharashtra held a long march from Nashik to Mumbai in October last year to demand their rights under the Forest rights Act. (Photo: Asian Age)

The Supreme Court verdict on eviction of forest-dwelling communities from forests, if implemented, will definitely see more unrest in various parts across India.

The recent order of the Supreme Court on a petition filed by the Wildlife Trust of India, Nature Conservation Society and Tiger Research and Conservation Trust evicting more than a million forest dwellers who filed claims under the Forest Rights Act (FRA) as “bogus claims” is being seen as black day for the millions of forest people across the country. This is indeed a direct attack on the Constitutional and democratic rights of forest people who are now specially protected by an Act of Parliament enacted in 2006: The Scheduled Tribe and Other Forest Dwellers Recognition of Rights Act. It is an irony that adivasi and people who have been living in forests since ages saw a ray of hope in terms of attaining independence in 2006 only to be ultimately branded as “encroachers”.

This SC order has defeated the very purpose of the Act that in its preamble talks about undoing “historical injustice”. These injustices were committed by colonial policies that exploited forests only for revenue generation and for overseas development i.e the establishment of the Forest Department (FD), looting of land and forests by various colonial laws such as the 1894 Land Acquisition Act and 1927 Indian Forest Act. The conflict with adivasis in independent India is rooted in a colonial legacy that unfortunately is being followed by governments even after independence. Crony capitalism is now intensifying this conflict as the loot of natural resources can only continue by stopping the rights and control of subaltern classes to these resources. In reality, the SC should have moved a step further by showing FD a way out from forest as “real encroacher” rather again calling forest people encroachers. The Apex court owes forest-dwelling communities justice that has been denied to them since colonial times.

Subsequently, another bench of SC withheld temporarily the application of the order till the next hearing, that is July 10. But this temporary order doesn't resolve the problem of eviction. In many places, eviction has started such as in Ranipur sanctuary, Chitrakoot, UP on March 1 and this will continue to happen until the petition is quashed.

The union government, in its review petition filed this week, has correctly argued that the eviction of tribals would cause serious prejudice to such tribal who have been residing in forests for generations.

The FRA does not have any provision of rejection, the supreme power lies with the Village Council (VC). If anyone is aggrieved with the VC’s decision, they can approach a sub-division level and district-level committee for review. First of all, it is erroneous that such a large-scale rejection is shown in the data. The strength of the FRA is recognition of the rights of both the individual and community rights through claiming and reclaiming. When the process of such recognition is still in the process, how such large-scale fake rejection by states should not be accepted. This rejection has been done in connivance with the forest department and district officials and not by the VC.

Rather than evicting tribals, rejection of their claims should be investigated in depth. This is designed to weaken the process of implementation of the FRA.

In a way, the SC order blocks the process of claiming and reclaiming of forest rights of the forest dwellers and it will make the process of implementation of FRA 2006 dysfunctional.

The absence of the government’s lawyer during the hearings only reinforces the predominance of colonial mindset against forest people during this legal process and how the government views their rights and welfare. The SC should have suo motu shown concern about effective implementation of the FRA.

It needs to be noted that during the historic long march to Mumbai undertaken by farmers and adivasis last year, and also when the order was being written by the SC in February, the issue of large-scale irregularities in the settlement of claims under the FRA was brought up. Communities across the country are still struggling to ensure proper implementation of the Act since the Central and state governments have not shown any political will and made every attempt to dilute the law and also violate it in the name of development and conservation.

The last time country-wide evictions took place was in 2002-2004, by an order issued by the MoEF, that too with a passing reference to a non-existent SC order of  23 November 2001 and thereby giving the wrong impression that evictions had been ordered by the SC.

Now, another historic injustice is about to be committed against forest dwellers. At least two thirds of the country’s forest lands are tribal lands under the 5th and 6th Schedule of the Constitution. The implementation of February 13 SC order will definitely see more unrest in various parts across India. With this draconian order, even the status of those who have already received their rights will be endangered. In all probability, they will also be attacked by the forest department and  forest mafias.

The author is the deputy general secretary of All India Union of Forest Working People. She has been associated with various organisations fighting for tribals’ rights.