NBFCs are struggling, despite the RBI enabling banks with access to liquidity to allow NBFCs to lend. 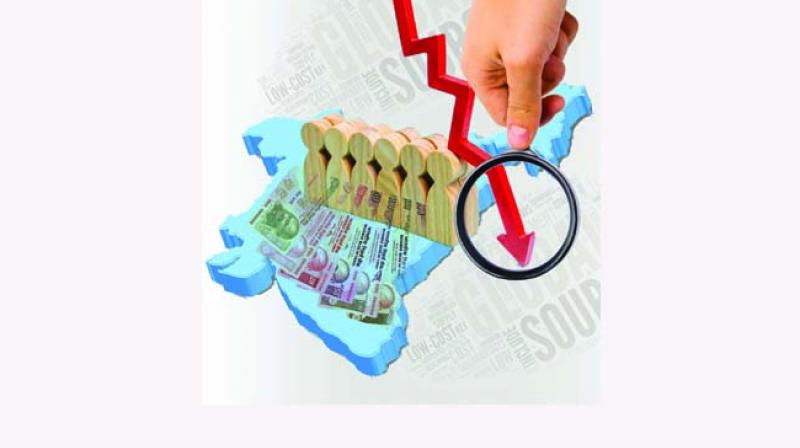 Exports are not rising and investment is slow, the auto sector has seen a decline in sales in the last four months, rural income has been hit by low prices and private sector investment in infrastructure has lagged.

The BJP government came to power with promises of a $5 trillion economy. That dream is still quite distant, for India’s economic status has been dealt another blow - this time on the 2018 global GDP rankings. India has slipped to the seventh position, from its spot in fifth place. The reasons are many: IIP growth has slipped to 3.1% in May and core-sector performance is sinking, too. Exports are not rising and investment is slow, the auto sector has seen a decline in sales in the last four months, rural income has been hit by low prices and private sector investment in infrastructure has lagged. NBFCs are struggling, despite the RBI enabling banks with access to liquidity to allow NBFCs to lend. Is there an easy answer? Experts advise caution with regard to sovereign bonds and against the government dipping into RBI recesses. The ‘super-rich’ tax, introduced in the recent budget, will hit consumption even more. There is no easy answer - the RBI could yield to government pressure and lower rates, which will bring temporary relief on the domestic front but will do nothing to improve investment. The latter, especially from foreign investors, will come only when consumption improves, a change that can only come about gradually, writes eminent economist Madan Sabnavis.

IIP growth is slowing down and the core sector performance has reached a new low. Exports are not rising and investment is still to revive. More significantly there are no signs of any recovery so far as companies follow a wait and watch approach.  The auto sector is witnessing continuous decline in sales in the last four months and consumer durables sales are also lacklustre. Corporate results for the first quarter of the year are not too buoyant with top line growth for the set of companies that have announced their results so far being in single digits. WPI inflation of manufactured goods has slowed down to less than 1% which means pricing power has diminished considerably that is affecting profits. The Budget has stuck to prudence and hence there has been no stimulus provided this time notwithstanding high expectations. The government, to top it all, is even more vocal in asking the RBI to lower rates, which means growth is an issue, The debate about whether growth rate is 7% or 2.5% lower as per the former CEA’s thesis is immaterial. Nor is the debate on various metrics on employment which are no longer being spoken of post elections. The economy is not in good shape.
What exactly is the problem? The two main engines to growth are consumption and investment. Consumption growth has taken a backseat as households have not witnessed commensurate increase in incomes either through salary income or new employment. This has affected consuming power. It was witnessed first during the busy season of 2018 when sales did not materialize and a number of companies were left with high levels of inventories.

Low food inflation
At the same time, rural income has been buffeted by low prices which are the mirror image of low food inflation last year. When consumers gain, farmers lose and hence spending power has been affected. This has fed back into low investment as industries have excess capacity with utilization rates still less than the magic mark of 75-80% when typically fresh investment is reckoned. This has meant that the investment rate has stagnated as seen from the gross fixed capital formation rate which is still around 28-29%.

The other big ticket investment is in infrastructure and here the private sector has lagged. First there is no appetite to go in for new projects with a number of stalled cases building up. While the government has taken lead in terms of infra development especially in the areas of roads, railways, affordable housing and urban development the same has not percolated to private investment. Also the investment of several companies in sectors such as steel, power, textiles, mining etc. have contributed to the NPA build up with some of them in the IBC fold. Therefore there is limited investment in this space.

The other sticky element that has built up is the situation in the financial sector which plays an important role in financing such investment. The challenges facing NBFCs in terms of raising funds has increased over time. This has affected their lending activities and the sectors impacted are housing, real estate, auto, SMEs. With one channel of financing being affected in terms of supply of funds, companies have also witnessed their businesses getting compressed. NBFCs normally tend to have relatively easier standards for disbursing loans and also charge higher rates for the risk.

The banking system is definitely in a better condition than last year but has turned more cautious when it comes to giving loans. The preference is for retail loans against corporates.  This has come in the way of willingness to lend. Hence even as the RBI has enabled banks to get access to liquidity for providing to NBFCs to enable the latter to lend, the appetite of banks is missing. Besides the NPA levels at just less than 10% is still high though lower than earlier as it does appear that the recognition part of the exercise has been completed by the PSBs.

QUICK SOLUTION?
Can anything be done to reverse this situation? The practical answer is that if it were easy, it would have been done by now. There is no quick solution and the recovery process will be slow and hence we can expect only gradualism here.

Let us look at the various pieces that have to fall in place.  First on the government’s part the commitment to meet the projected capex should be there. Last year the government compromised on the same to meet the fiscal target. Second, the business environment should be made friendlier at the micro level - constant tax scrutiny, change in policies, profit treatment etc. should be more predictable. Third, the government should desist from drastic reforms like demonetisation which had affected the SMEs quite badly which have never quite recovered. Reforms on labour must be considered albeit in a delicate manner as providing companies with freedom conflicts with the objective of job creation.

On the consumption side, jobs need to be created which will be a slow process and gets linked with growth. Second, the monsoon needs to be good and the prices received by farmers should be fair so that it leads to better income without affecting inflation. This will not be in the hands of the government but an exogenous factor.

On the investment side, the financial sector issue needs to be sorted out. The RBI and government have been trying to provide liquidity to the NBFCs but ultimately the decision must be taken by banks which are getting more risk averse. This will change only gradually and could take up to two years.

The RBI will, probably, under the force of popular demand, keep reducing interest rates which will help only at the margin especially for home buyers. But lower rates cannot spur investment which will be triggered only when consumption improves and the financial system falls in place.

In short, the recovery phase will be gradual and can take at least two years provided the monsoons remain favourable and there are no disruptive policies pursued.