When poll campaigns are polarised

THE ASIAN AGE. | R B SREEKUMAR

On the eve of 2019 Lok Sabha election communal issues have been projected by Sangh Parivar and BJP at micro and macro levels. 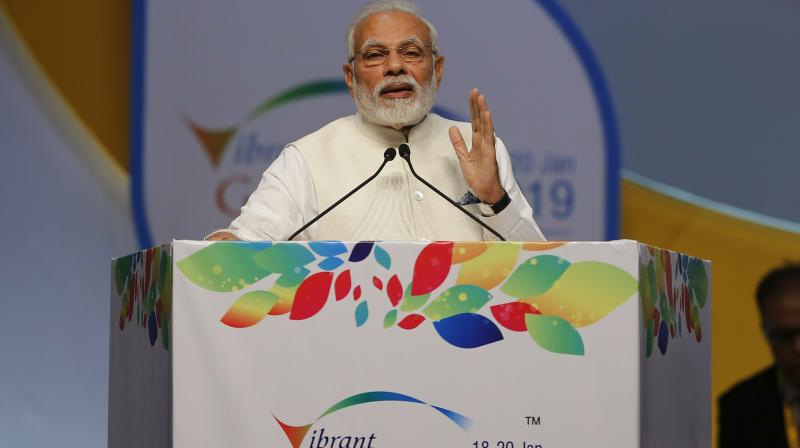 The Prime Minister has done nothing to discipline polluting industries, thanks to his reluctance to harm economic interests of the corporate world, whose help is imperative for election finances and influencing the media. (Photo: PTI)

Constitutional morality emphasizes on social contract of Indian people, assuring themselves justice, liberty, equality, fraternity and individual dignity. De-politicisation and communalisation of Indian politics has been visible from the days of Emergency in 1977. In post-Nehru times, political parties have no allergy to opportunistically bank on communal issues for gaining electoral capital. Rabid communal elements from Sangh Parivar, Muslim fundamentalist groups, like Jamaat-e-Islami were jailed with liberal democrat leaders championing Constitutional ethos, during Emergency. The left of the centre and secular parties did not experience any inhibition in collaborating with communal parties in anti-Emergency campaigns. Consequently since 1990s in India there were only two brands of politicians — those pursuing communal agenda as party programme, policy, strategy and tactics like the BJP (Jan Sangh) Akali Dal, Indian Union Muslim League (IUML) and host of localised Muslim parties, keen on actualising tenets of Islamic jurisprudence with Holy Quran, Hadith and Shariyat.

Unfortunately, the Union Government constituted with massive majority support in Lok Sabha in 1984 did not capitalise in this golden opportunity for the re-assertion of secularism in Indian politics. Rajiv Gandhi government had failed to raise itself to the level of expectation of Indian citizens, with sound democratic and inclusive vision. The government adopted communal appeasement policy towards both and minority communalism. Legislation to reverse Shan Bano judgment to pamper orthodox Muslim clergy, ban of novel Satanic Verses by Salman Rushdie are illustrative. Soon the government buckled under pressure of Hindu fundamentalists and permitted worship of Rama idol inside Babri Masjid. The raison d'être of Ram Janmabhoomi liberation movement was confirmed by the government by laying foundation stone for Ram temple.

The posture of ad hoc communal appeasement by surrendering to Hindu and Muslim orthodoxy simultaneously by Union government, had effected a paradigm shift in Indian politics and substantially debilitated secular and spiritually religious people of both majority and minority communities resulting in installation of BJP-led NDA government in 1999.

The Godhra incident killing 59 Kar Sevaks on February 27, 2002  and subsequent prolonged Gujarat riots exacerbated communalisation of both communities. Later, perception about non-performance of UPA II government (2009-2014) created a congenial ambience for the Hindu rightist communal forces to secure majority in 2014 Lok Sabha elections. Narendra Modi schooled at every level of political leadership in Sangh Parivar hierarchy for years could sway the Indian electorate in the election. Hindu communal mobilisation, campaigns on minority favouritism pursued by the Congress, mobilising all anti-Congress forces and uplifting aspirations of youth and middle classes about prospects of affluence, employment and corruption free administration and so on facilitated BJP’s electoral process.

On the eve of 2019 Lok Sabha election communal issues have been projected by Sangh Parivar and BJP at micro and macro levels. The deterioration of Kashmir situation, surgical strike in 2016, air raids to Pakistan in 2018, strong arm tactics against militancy, etc are projected as success stories of Modi government.

The counter action by the Opposition is deemed to be inadequate. They could not mobilise prevailing extensive discontentment on agrarian front, ills of demonetisation and GST implementation and failure to fulfil even 25 per cent of promises made in 2014 election to their advantage. The Congress is not consistently active in exposing false claims of the government in its publicity projections and on social media.

The Opposition approach to Pulwama incident and subsequent air strikes in Pakistan was lackadaisical and uninspiring. This is the impression of uncommitted voters. Even those who are quite critical of government failures are assessing that viable alternative to Modi is not projected by the Opposition. National security is paramount in the minds of people, particularly those unaffected by economic deprivation. Though Union government is a failure in tackling ecological disasters, success in Swachh Bharat programme is widely acclaimed. Delhi is the only major capital city of the world which had to be closed down due to pollution. 90 per cent of the world’s most polluted cities are in India. The Prime Minister has done nothing to discipline polluting industries, thanks to his reluctance to harm economic interests of the corporate world, whose help is imperative for election finances and influencing the media.

The plight of Opposition in general and the Congress in particular is like a lazy student, who starts preparations for the final examination during the study leave only, at the end of the course. Nevertheless, the discontentment of electorate is not to the extent of the opposition to Indira Gandhi in 1977. Even if the Opposition may persist in its slumber after 2019 election also, the cup of agony of Indian citizen will be full by 2024 and then the BJP government will be voted out and as noticed in 1977 election vis-à-vis Indira Gandhi government.

Many religious customs and practices of minority and majority community are contrary to provisions of the Constitution, particularly Article 13, Article25, Article 51 A. But Hindus are increasingly getting convinced of the Sangh Parivar propaganda that many illogical customs and rites of the minorities are against constitutional morality, viz — Triple Talaq, ban on entry and employment of women in religious places. But, the Opposition is supporting such obnoxious practices thanks to imperative of vote bank politics. The election result on May 23 will indicate the extent of success of Sangh Parivar indoctrination of the Hindu community. It will be axiomatic that Hindus are feeling that their identity is marginalised. Such an attitude is responsible for the unprecedented support for the BJP agitation opposing entry of young women in Sabarimala temple.

It is a curse of this ancient land of India, with 5,000 years of long civilisational heritage, that while we could be tackling problems by invoking wisdom from artificial intelligence, robotics, latest technology, digital revolution, etc, Indians are discussing triple talaq, rights of women to enter temple, contrary to the stipulations in the Universal Declaration of Human Rights.

These issues are irrelevant to spiritual objectives of God-centric religions (Vedic Hinduism, Sikhism, Shintoism, Zoroastrianism, Jud-aism, Christianity and Islam) and for rational religions (Taoism, Confucianism, Buddhism and Jainism). All of them exhort their followers to aim at constantly multi-faceted self-development primarily and then endeavour for ennoblement of others. We face the paradox of India having the highest number of worship centres (temples, mosques, churches, dargahs, monasteries, etc) proportionate to population, but still the nation is positioned among the last 10 most dishonest nations of the world. Sizeable number of gullible people from Hindu and Muslim communities are becoming programmed communal robots nurturing condemnable degree of hatred to “enemy” community. Pan-Islamic movements influenced by Wahabism, Qutbism, Mehdudism and Salafism are inspiring and instigating innocent youth to prepare to die for Islam. Sangh Parivar with active support of Central and certain state governments are making efforts for converting India into a Hindu theocratic state by subverting criminal justice system, and rule of law. True Hindus and Muslims should become agile about threat to Constitutional values from pseudo fundamentalist militants and initiate suitable counter measures.

(The author is former DGP of Gujarat)