‘Gaganyaan’ is a crewed orbital spacecraft being designed to ferry three Indians o outer space on a seven-day mission. 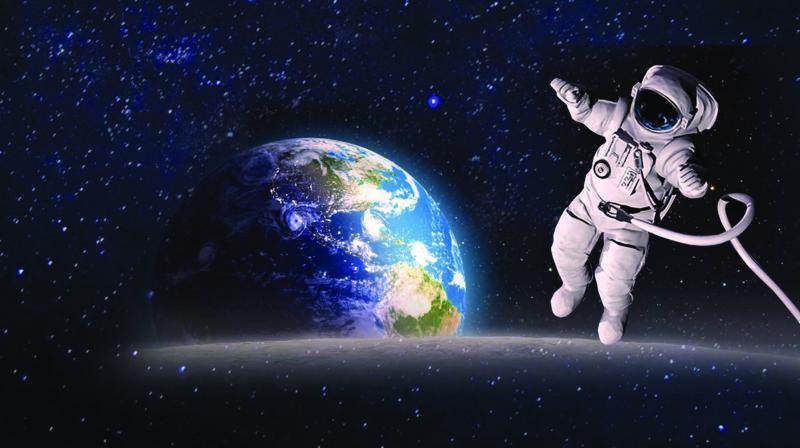 ‘Gaganyaan’ will be smaller in size (3Mx2.70M in diameter) when compared with the Russian Soyuz capsule (7.2Mx2.7M in diameter), Chinese Shenzhou (9.25Mx2.8M in diameter) and NASA’s proposed Orion spacecraft (3.3Mx5M).

One giant leap for India... As the country's space agency ISRO gears up to launch three Indians into outer space, months ahead of the planned Gaganyaan 2022, the crucial question is, will ISRO be able to accomplish this seven-day mission successfully. B.R. Srikanth reports on the technological challenges in ISRO's path ahead of this momentous flight that will finally put India on par with arch-rival China. At least, in space.

The countdown to the famed “That’s one small step for a man, one giant leap for mankind" moment, savoured by legendary astronaut Neil Armstrong five decades ago, has commenced for Indian space scientists.

It's not as though any one of these self-effacing scientists will set foot on the Moon as yet, but ‘Gaganyaan,’ or sky craft in Sanskrit, that is being designed by them will send three Indians into outer space in a game-changing moment-technologically and geo-politically-for the country in December 2021 - eight months ahead of Gaganyaan 2022. And such an entry into the 'Big Boys' league by reaching a goalpost which has remained distant, will be an incredible turning point in history, given the fact that the country is set to emerge as the third largest economic power in the world, and therefore ready to collaborate with top space-faring nations to explore Moon, Mars and other heavenly bodies, both for science, and for establishment of human colonies.

“This is the most important step of our agenda as we begin to think long term about deep space exploration and sustenance of life on other planets or establishment of a laboratory on the Moon. It will help us in evaluation of our technological expertise to embark on more ambitious programmes after establishing our proficiency in making state-of-the-art satellites and heavy lift rockets," says Dr K. Kasturirangan, former Chairman, ISRO.

Preparations for the human space flight programme commenced a decade ago when Chairman G Madhavan Nair secured approvals of the Space Commission and the Planning Commission but the project slipped into a limbo as general elections were announced in 2009, and the Union cabinet could not take a call on this historic trip into outer space-by Indians onboard an indigenous spacecraft launched from Indian soil.

Last Independence Day, Prime Minister Narendra Modi announced the flight during his address to the nation, giving the project its much needed fillip and followed up with the cabinet's approval of Rs 10,000 crores budget on December 29, 2018, to build the infrastructure and train the crew.

Dr Nair is optimistic that a successful flight in December 2021 could well get ISRO's cash registers ringing with other space agencies lining up to fly their astronauts, just as they have been queuing up for the launch of satellites by PSLV (Polar Satellite Launch Vehicle).

"Today, only Russians offer commercial rides into space as NASA does not fly the space shuttles, and China does not offer commercial flights. So, a successful flight by an Indian crew will not tilt the scales in terms of technology and geo-politics, but ISRO can also generate significant additional revenue as other countries are likely to seek opportunities for commercial flights," says Dr Nair.

But the crucial question: Will ISRO be able to accomplish this mission and ensure a smooth return of the three-member crew after seven days in space? What are the technological challenges in ISRO's path ahead of this momentous flight? First, GSLV-III (Geo-synchronous Satellite Launch Vehicle-III), the rocket designed to transport the three-member crew to outer space in a crew module, must be 'human rated,' or declared absolutely safe for those chosen for the trip.

Second, the environmentally controlled cabin in which the crew will travel must have facilities to control the temperature and gases sans a single glitch.

Third, the crew must be trained well along with high endurance levels not only during the week-long stay in space but also while carrying out experiments which Indian scientists are likely to design.

Former chairman A S Kiran Kumar says some of these challenges have been addressed in various facilities of ISRO, adding "from now on you will see lots of action as all types of tests will be completed and all technologies will be in place before the date announced by the Prime Minister. GSLV-III will be flown with an empty crew capsule a couple of times before we declare the rocket fit for travel by humans,” he explained.

This mission, however, will flout the agenda set by the late Dr Vikram Sarabhai, who, in the nascent years of the space programme, had announced: "There are some who question the relevance of space activities in a developing nation. To us, there is no ambiguity of purpose. We do not have the fantasy of competing with the economically advanced nations in the exploration of the Moon or the planets or manned space-flight."

Dr Nair, however, explained that Dr Sarabhai's vision of passing on the benefits of space technology to the common man have been achieved with the launch of several multi-purpose satellites over the last five decades and ISRO should now embark on more ambitious missions like the human space flight programme. "Those days, ISRO's total budget was about Rs two or three crores, and even Rs 100 crores would have been impossible. For this first flight, the government has sanctioned Rs 10,000 crores which translates to a little over Rs 2,000 crores each year, which ISRO can afford to spend to gain expertise in a plethora of disciplines," added Dr Nair.

It's not just Dr Nair, Dr Kasturirangan and Mr Kiran Kumar but a host of other experts are certain that spin-offs of technologies developed for this outing in December 2021 will not only enrich the quality of research & development in ISRO laboratories or private industries but also spawn a host of new products which could be used in sectors as varied as communications, medicine, or even development of new class of materials as tough as nails but as light as a feather!