The manifesto says businesses will be rewarded for job creation and for employing more women. 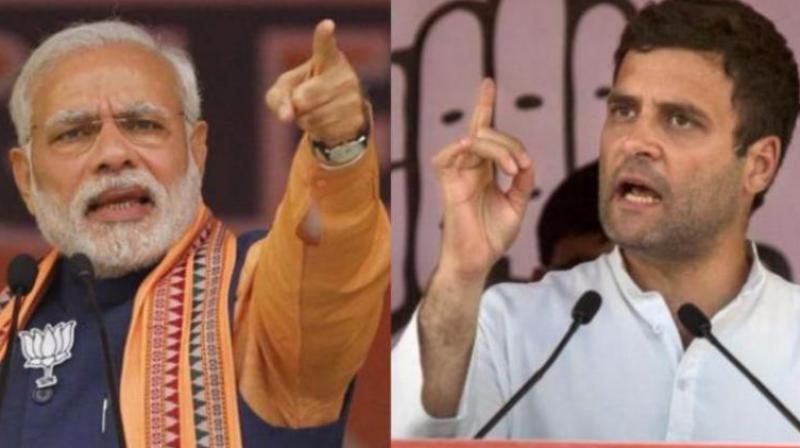 Nyay, the proposed minimum income scheme for the poor, is the Congress’ answer to the BJP govt’s cash assistance to farmers. Both parties are also likely to make promises on jobs and use hard and soft Hindutva.

The import of the detailed manifesto exercise of the party is to avoid falling into the trap of hyper-nationalism and Hindu pride, which are likely to be the chief components of the vision document of the rival BJP.

Though the BJP’s manifesto is yet to be out, the saffron party leadership is likely to continue highlighting the development plank — which it credits for the party’s swashbuckling performance in 2014. A healthy dose of rashtravaad (nationalism), which is part of Prime Minister Narendra Modi’s vision of a “New India”, is also expected to figure high on the BJP’s poll promises.

The 2019 poll manifesto is expected have sops and promises to woo the “neo-middle-class” and is likely to keeping in mind the expectations and aspirations of, this section which got convinced with the BJP’s ability do deliver the Sabka Saath Sabka Vikas (development for all) poll promise of 2014. This section also figures prominently in Mr Modi’s speeches when he refers to his government’s initiatives.

However, agriculture and the farmers could also be key highlights of the BJP’s manifesto, especially when “farmers’ unrest” gave a lot of bad publicity to both the BJP and the Modi-led NDA government during the last five years.

Just like all BJP manifestos so far, Ram Mandir is expected to find a mention again in the document, along with the party’s commitment on core issues, including abrogation of Article 370.

Promises for Kashmiri Pandits, underprivileged, youth and women could also be part of the BJP’s stated agenda, which, sources said, will prioritise development of all regions. National security will also figure in it, especially when it has become synonymous with nationalism in the NDA regime.

The Congress, which took a bad drubbing in the last general elections due to what senior leader Jairam Ramesh had famously described as “being out-funded” by the BJP, however, has stuck unapologetically to its sharp slant towards welfare economics promising a massive dole of Rs 72,000 per year to five crore families earning less than Rs 12,000 a month in the form of Nyay or the Nyuntam Aay Yojana.

Former finance minister P. Chidambaram justified the approach saying the manifesto was focused on creating wealth that would lead to welfare.

Similar is the case with the party’s commitment to review the Armed Forces (Special Powers) Act (AFPSA) and doing away with the sedition law, despite the nationalistic fervour that the BJP has been able to whip up post-Pulwama.

As expected, Mr Modi was quick to claim that the Congress  was anti-armed forces owing to its promise on the AFPSA, which is a burning issue in the Northeast as well as Jammu and Kashmir. But the Congress stuck to its stance of balancing the needs of the armed forces and human rights of citizens while reviewing the draconian law.

The hallmark of the Congress manifesto this time is Nyay. Under it, a sum of Rs 72,000 per year will be transferred to the poorest 20 per cent households in India. The party has pledged to make jobs its No. 1 priority, both in the public and private sectors. It has promised to fill all four lakh Central government vacancies before March 2020 and persuade different state governments to fill their 20 lakh vacancies as well. It plans to create an estimated 10 lakh new Seva Mitra positions in every gram panchayat and urban local body.

The manifesto says businesses will be rewarded for job creation and for employing more women. Firms with over 100 employees will have to implement an apprenticeship programme.

On farmers, the Congress promises to present a separate “Kisan Budget” every year if voted to power. The party has also promised to bring a permanent National Commission on Agricultural Development and Planning.

On healthcare, the Congress has promised to enact the Right to Healthcare Act and guarantee every citizen free diagnostics, out-patient care, free medicines and hospitalisation, through a network of public hospitals and enlisted private hospitals. It has promised to double expenditure on healthcare to three per cent of GDP by 2023-24.

The manifesto also promises to simplify the GST regime with a single moderate rate of tax, zero rating of exports, and exemption for essential goods and services. It will even pass on law on privacy that would restrict the use of the Unique ID to the original purposes of the Aadhaar Act.