Groundwater: The lifeline of urban India

Securing urban groundwater in a rapidly urbanising India is key for water supplies. 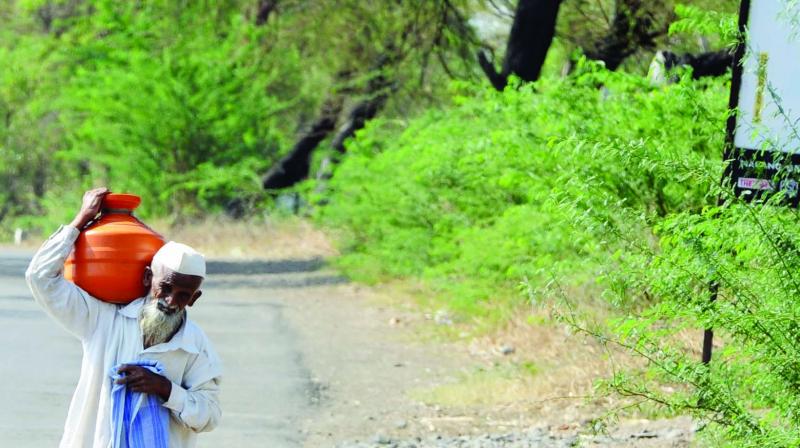 Even cities like Pune and Mumbai that depend upon reasonably reliable and established surface water supplies are no exception.

The recent news item on some cities running out of water in the near future is perhaps an indicator of the emerging crisis of urban water shortages. Demand in a few Indian cities today is in excess of the annual precipitation over the city area. The articulation of urban water scarcity has often masked the growing dependence on groundwater resources in India’s villages, towns and cities. The silent evolution of India’s groundwater dependency clearly needs a closer look at the highest levels of water policy making.

Groundwater has gradually emerged as the hidden water lifeline of urban India. If statistics are to be believed, at least half the urban water supplies in India are through groundwater, the clamour for bringing in surface water transfers from great distances notwithstanding. Groundwater supplements formal civic supplies to various degrees in nearly six thousand odd small towns to large agglomerations in India. As towns grow into cities and cities into larger urban agglomerations, the rural-agricultural landscape surrounding a city gradually morphs into a sprawling cover of built-up areas. While the core areas of cities are often serviced through more formal, civic water supplies from reservoirs small and large, the suburbs and “periurbs” (peri-urban areas) almost entirely draw upon groundwater. There is no denying that large parts of the peri-urban space in growing cities is almost entirely serviced by groundwater.

Even cities like Pune and Mumbai that depend upon reasonably reliable and established surface water supplies are no exception. There are many parts of cities like Bengaluru and Pune, where water supplies to large apartment blocks are sourced from well water (dug wells, bore holes and tube wells, depending upon the nature of aquifers – rock formations capable of storing and transmitting groundwater - in a region) or tanker water. Even tanker water is largely drawn from wells and bore holes in and around growing townships. A large proportion of the so-called real estate development also draws upon groundwater resources for construction, the data for which is hard to find. While there are some estimates on how much groundwater is pumped in a city, a recent study by ACWADAM in Pune (a city that is largely supplied by dam water) estimates a groundwater footprint of the order of 3 to 4 TMC. In other words, at least a quarter of the water demand for the city is met by groundwater today. Pune falls on the lower end o
f the spectrum of groundwater dependent urban India as it depends significantly on surface water from reservoirs.

Moreover, it is not just the current levels of groundwater dependency in India’s towns and cities that must become a cause for alarm, but also how sustainable do urban aquifers remain today. Current urban water planning largely neglects the context of groundwater, particularly in the trade-offs that accompany the large-scale, often unavoidable urbanisation. There is clearly a need to estimate groundwater availability in urban India on a dynamic basis for some important reasons. Firstly, the changing nature of aquifer stocks, as a consequence of the potentially reduced infiltration on one side, and the induced recharge due to leaky water supplies and sewerage on the other side, create a clear trade-off between quantity and quality. The net result could be quite diverse, very often leading to serious issues of contamination. Secondly, as cities soar vertically, we also dig deeper for stronger foundations that often eat into existing aquifer space. Third, in the absence of a policy on groundwater, natural groundwater recharge areas get eroded and built upon. Hence, a growing demand leads to increased pumping from potentially depleting stocks over which there is competitive drilling and pumping. Last but not the least, we have also ignored the significance of natural discharge zones – springs – in our cities and the water supply and ecosystem services that these springs have provided in a growing urban space.

If estimates of groundwater extraction are not considered in the urban water footprint, ideas like 100% sewage treatment or even the objectives of reuse, recycling and recharge of water cannot be fully realised. Acknowledging the significance of groundwater in urban public water supplies might be a small step towards a larger plan for integrating groundwater into securing urban water supply. Such security is not possible without considering the prospect of large-scale ‘public’ recharge at scale in the natural recharge zones for different aquifers. Such an effort can then be complimented through decentralised recharge programmes through strategic rainwater harvesting measures. In combination, these two approaches could constitute a large-scale programme on Managed Aquifer Recharge (MAR) in urban India, an approach that has been quite successful in many regions of the world. Protecting existing natural recharge zones, restoring strategic zones for public recharge and prioritising the revival of sustainable aquifers must become a part and parcel of water governance in India. Hence, unless a detailed understanding on urban aquifers in India is developed, with the forward linkage of the strategic management of these aquifers, haphazard groundwater extraction will only deepen the crisis surrounding groundwater. Partnerships and collaborations on multiple fronts based on some of the ideas above are being tried out in a few cities in India. These efforts hold hope in taking up the case for securing urban groundwater in a rapidly urbanising India.

(Dr Himanshu Kulkarni leads Pune-based ACWADAM, one of the leading NGOs working on the participatory management of aquifers in India)