Law to the rescue of heritage: A landmark judgment

Eight writ petitions were filed in the public interest in the High Court of Telangana assailing the Cabinet decision to demolish the Errum Manzil. 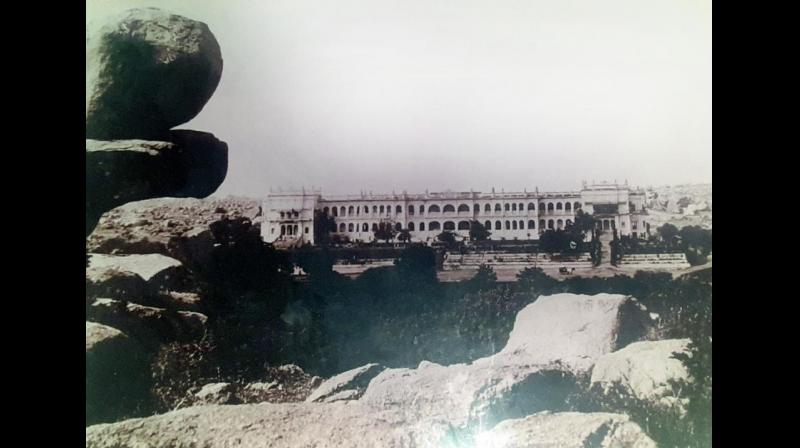 The Errum Manzil Palace before it was acquired by the state government in 1951. Picture courtesy Dr Mir Asghar Husain.

Errum Manzil has been a landmark for well over a century but it has taken a landmark 111-page judgment of the High Court of Telangana to save it from extinction.

On June 18, 2019, the Telangana state Cabinet took a decision to construct a new Assembly Complex to be built after demolishing the Errum Manzil Palace. On June 27, 2019, Chief Minister K. Chandrasekhar Rao performed the Bhoomi Puja for laying the foundation stone for the proposed Assembly Complex.

Errum Manzil is a 150-year old palace and was listed as 'Heritage Building' pursuant to Regulation 13 of the Bhagyanagar Zoning Regulations, 1981 issued under the AP Urban Areas (Development) Act, 1975 which was adopted by the State of Telangana after its formation. Regulation 13 was a comprehensive set of procedures designed to preserve and conserve heritage buildings and was brought into force in 1995. Hyderabad was the second city after Bombay (as it then was) to have promulgated these regulations and they served as a model for the rest of the country.

The listing prohibited the demolition of a heritage building without the approval of the Vice-Chairman, HUDA (now the Metropolitan Commissioner, HMDA after the coming into force of the Hyderabad Metropolitan Development Authority Act) and the advice of the Heritage Conservation Committee. Proposals for demolition had to be notified, objections invited from the public and it was only after consideration of the objections, could the permission for demolition of a listed heritage building be given.

Regulation 13 was abruptly deleted ‘from its inception’ by the TS government by G.O. No. 183 dated December 12, 2015. Thus, the regulation and protection of all the 151 heritage buildings listed under Regulation 13 were summarily done away with.

Hyderabad, once the model for heritage protection, earned the dubious distinction of being the first in the country to repeal its Heritage Regulations, paving the way for the demolition of Errum Manzil as well as any other heritage building.

Heritage is a fundamental right
While setting aside the Cabinet decision, the High Court has held that the “identity of an individual is moulded by his/her culture, history and heritage.

Therefore, preservation of heritage has been incorporated to be part of 'life' enshrined in Article 21 of the Constitution of India.” The right of an individual to preserve his or her heritage has thus been elevated to the status of a fundamental right guaranteed by the Constitution, and no person can be deprived of such right except by the due process of law.

Furthermore, the High Court declared that since India is a signatory to the World Heritage Convention of 1972, a duty is cast upon the State to “protect and conserve the cultural heritage of the country” and “integrate the protection of heritage into comprehensive planning programs”.

It is ironic that a government that came into power after having done so much for the people of Telangana state, and holding out the promise that the people of the state can rejoice in the new-found recognition of their identity and culture, should so casually erase the protection of their heritage.

What next?
News reports suggest that the state government is considering an appeal to the Supreme Court to set aside the judgment of the High Court. This is easier said than done, as an appeal is not a matter of right. The state government has the burden of showing that the substantial questions of law arising from the decision of the High Court make it a fit case for final determination by the highest court of the land.

This is indeed a difficult proposition in view of the closely reasoned judgment and the flagrant violations of the law by the state noticed by the High Court.

A decision to appeal would also send a clear message of the view of the government with regard to its constitutional obligations relating to the preservation of heritage and adherence to the laws that the government itself has brought into force.

Another option for the government would be to follow the procedure that is prescribed by law to modify or demolish heritage buildings. This involves making a detailed proposal, inviting objections from the public and taking a fair and considered view in light of the objections. There may be other options too to effectively get over the High Court judgment and allow the state a free hand to demolish heritage buildings.

On the other hand, it would be open to the state government to embrace the High Court judgment and the principles laid down in it. Doing so would be to the credit of the government and earn it the gratitude of people who believe that heritage is not just for the present generation to do what they wish with it, but a responsibility to preserve it for future generations.