The Congress readily concedes that it was not the numbers but the choice of a leader which was likely to take time. 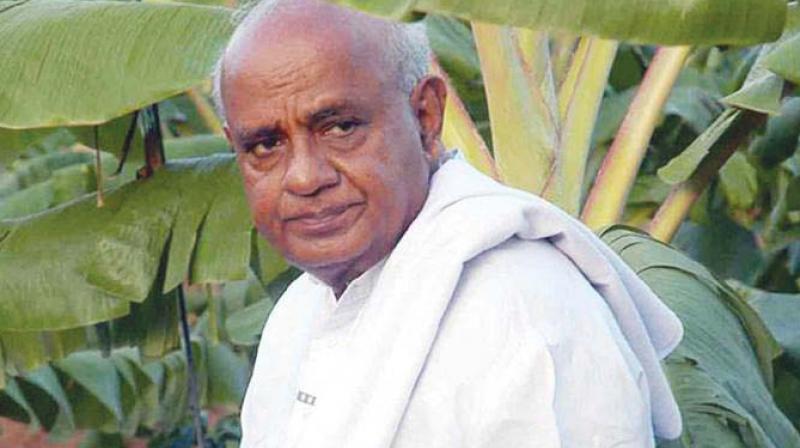 It was 1996, and all roads in the capital led to Andhra Bhavan where a bunch of Third Front stalwarts had been talking through the day and well into the night on who would be the best candidate for the next Prime Minister of India. Suddenly, DMK chief late M Karunanidhi felt hunger pangs and asked for ‘Dahi Vada’. The leaders present in the room heard 'Deve Gowda' and this is how, the Janata Dal leader was chosen as the next Prime Minister of the country, picked from among his equally worthy compatriots.  That wasn’t how he was chosen, of course, but a veteran Congress leader from Mr Deve Gowda’s home state Karnataka never fails to narrate this joke to reporters at informal gatherings at his home, possibly to drive home the point on the triviality that marked the process of choosing a prime minister in those days when a revolving door of non-Congress Third Front governments occupied office from 1996 to 1998.

A similar scene awaits the Indian political arena in the event that the existing NDA fails to get a clear majority on May 23. With even internal Congress surveys not expecting the party to get more than 120-140 seats, it is the regional satraps who are looking at the fructification of their Prime Ministerial ambitions.

There would be one major difference though this time. The Congress, which had in 1996, supported the Third Front governments from outside, is determined to be a part of the dispensation at the centre for it faces a real danger of the party withering away if it is kept away from power for too long.

According to a senior Congress leader, who has been monitoring the booth-level reports after every phase of polls, the party expects that in the first four phases, the existing UPA would get around 131 seats and existing NDA would get 128 seats. The Grand Old Party, which has many leaders who are old hands at forming alliances are already exploring options of bringing all these parties on a common platform before May 23 and plan to approach President Ram Nath Kovind asking him to treat the UPA and its possible new allies as one block while extending the invitation to the single largest dispensation to form the government post May 23.

Many leaders, which include Andhra Pradesh Chief Minister N Chandrababu Naidu, who fell out with the NDA last year over according special category status to his state, and Congress treasurer Ahmed Patel are planning to formulate a joint letter with the signatures of all parties that will be submitted to the President before May 23.

While the Congress leadership feels that the YSRCP was a natural ally, the latter has decided to go as a bloc with Mr Rao led TRS, as 42 MPs from Andhra Pradesh and Telangana together, will give them more bargaining power.

On the KCR front too, interesting things are happening. Mr Rao, who has till now been more inclined towards the NDA, is understood to have asked Karnataka Chief Minister H D Kumaraswamy, who runs a coalition government with Congress in his state to negotiate with the Gandhis on his behalf. Sources said he also wants DMK chief M K Stalin to put in a word. The differences between the BJP and TRS emerged after Rs 8 crore was seized in cash from BJP office bearers in Hyderabad and a hundred turmeric farmers from the state went to Varanasi to file nominations against Prime Minister Narendra Modi. It might be recalled that it was Mr Stalin, who had first proposed the name of Congress President Rahul Gandhi as the prime minister of any opposition coalition at the Centre. The sources say that in this scenario what Mr Rao is looking at is, if not the prime minister’s post, at least the Deputy PM portfolio.

The Congress readily concedes that it was not the numbers but the choice of a leader which was likely to take time. However, a section of the Congress feel that in case the party manages to get 140 or more seats, it cannot give up on the post of Prime Minister.    That the going to select a PM would be tough is evident from the fact that as the 2019 battle draws to a close, BSP chief Mayawati, who has not contested the Lok Sabha elections, has indicated  that she might seek re-election from her usual constituency Ambedkar Nagar, if the need arises post-elections.

SP President Akhilesh Yadav, who has formed a hugely succesful alliance with the BSP in UP, has also said that the next Prime Minister might be from his home state.

Similarly the Trinamul has in its election speeches being crying “Didi ebar Dilli Jabe (didi will now go to Delhi)”.  Mr Pawar, though silent, has been a key player in getting the Opposition parties together.

With less than two weeks to go before the results are out, it remains to be seen whether the proverb “Ek Anar Sau Bimar”, loosely translated as “One post, 100 applicants” holds out and another dark horse like Mr Deve Gowda will emerge to steal the show.