Pertinently, attempts to deviate from what has been set out in Article 371(A) have not gone down well in Nagaland in the past. 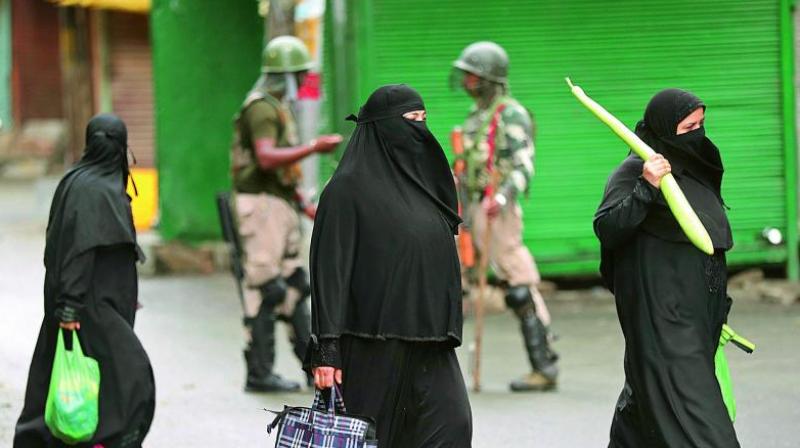 Kashmiri women holding bags of essential commodities walk past soldiers closing off a street in Srinagar on Saturday. (AP)

Guwahati: The Centre’s decision to read down Article 370, granting special status to Jammu and Kashmir, may come as handle for separatist forces to provoke anti-New Delhi sentiment among people in the volatile northeastern states. Most of these states have been accorded special status under different clauses of the Article 371 to preserve and protect tribal culture and land.

The first reactions came from Nagaland where Article 371(A) is in force. According to it, no act of Parliament shall apply to the state of Nagaland with respect to the religious or social practices of the Nagas, its customary law and procedure, administration of civil and criminal justice involving decisions according to Naga customary law and ownership and transfer of land and its resources. It shall apply to Nagaland only when the state Assembly passes a resolution to do so.

Nagaland governor R.N. Ravi, was quick to issue a clarification, assuring the civil society that the latest development in J&K would not have any impact on the special status of Nagaland. “I would like to categorically assure you all that you don’t have to worry at all. Article 371(A) is a solemn commitment to the People of Nagaland. It is a sacred commitment,” he said.

Even after the clarification, the Naga Hoho, the apex tribal council of Nagas, said, “We are concerned. This is really undemocratic and undermining minorities’ interest.” Naga Hoho president Chuba Ozukum said, “If the Government of India can scrap Article 370 in Jammu and Kashmir, it can remove Article 371(A) in Nagaland.”

Pertinently, attempts to deviate from what has been set out in Article 371(A) have not gone down well in Nagaland in the past. In November 2017, a proposal to extend 33 per cent reservation to woman in urban local bodies, which goes against customary Naga law, triggered an upheaval that eventually led to a change of guard in the state. But there has been dissenting opinion, too. Legislator Neikiesalie Nicky Kire of the ruling Nationalist Democratic Progressive Party (NDPP) recently observed that Article 371(A) impedes the state’s development. The article states that land and its resources in the state belong to the people and not the government. Citing this fact, landowners do not allow the government to carry out any development activity on their plots, Mr Kire argued.

Just as Article 371(A) applies to Nagaland, Article 371(B) is in force in Assam, Article 371(C) in Manipur, Article 371(G) in Mizoram and Article 371(H) in Arunachal Pradesh. Fear was also palpable in Mizoram, for which the special constitutional provisions are the most extensive. Article 371(G), which came into effect after the signing of the historic Mizo peace accord in 1986, says that no act of President with respect to religious or social practices of the Mizos, their customary laws and procedures, administration of civil and criminal justice and ownership and transfer of land shall apply to Mizoram without the consent of the state legislature. The intelligentsia and political leadership of the state are of view that the Centre’s move may intensify demand for a Union Territory by the minority Chakmas, who are getting political support from the BJP in the Christian-dominated state.

Mr Lallianchhunga, assistant professor of political science, Mizoram University, said the move will boost the morale of minority communities like Chakmas that are demanding UT status. Purchase of land and settlement in Mizoram may also be opened to outsiders.

Urging the Mizo people to brace for a blow from the NDA government, a statement from PRISM said, “The decision of the Centre showed up the vulnerability of northeastern states like Mizoram, which is being given special safeguard in accordance with Article 371(G) of the Constitution and the inner line permit regime.”

Meanwhile, the formation of the UT of Ladakh is set to intensify the demand for separate states and UTs of Bodoland and Karbi Anglong in Assam as well.

In a statement, the National Federation for New States (NFNS) said the NDA government, having sufficient support in both the Houses of Parliament, should take the initiative to create the states of Bodoland, Gorkhaland, Vidarbha, Tipraland, and the autonomous state of Karbi Anglong.