The beast in human beings

There have been philosophies and ideologies that inspired human beings through self-suffering and sacrifice in the process of building civilisation. 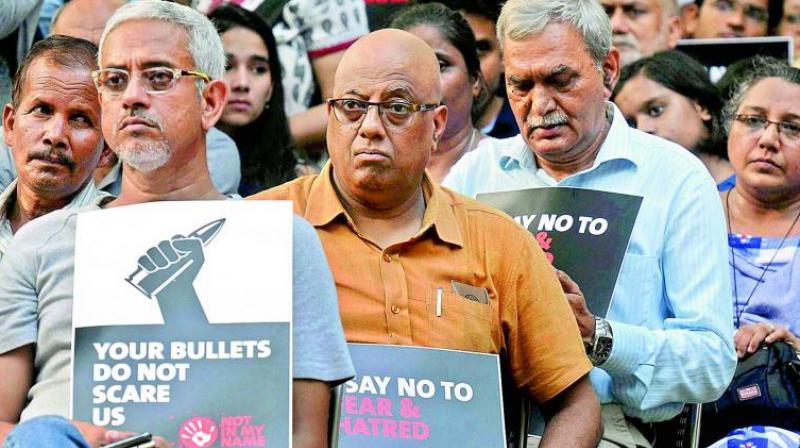 Demonstrators hold placards with the picture of journalist Gauri Lankesh during a Not In My Name protest, at Jantar Mantar in New Delhi on Thursday (Photo: PTI)

Reflecting on the Gujarat genocide the late rights activist K. Balagopal delved deep into the very nature of human beings and brutality that is hidden in humans. What makes some humans indulge in cold-blooded killings of those with whom they have no personal animosity or grievance is perplexing. Harbouring personal animosity and taking revenge is part of human vulnerability and could always be explained, but killing strangers against whom they have no personal grudge is something that can deeply disturb the conscience and make one reflect on the complexity of human nature. It is so complex that some humans are exceptionally humane at one end and beastly at the other.  There have been philosophies and ideologies that inspired human beings through self-suffering and sacrifice in the process of building civilisation. But, there are equally powerful counter-ideologies that criminalise and brutalise humans.  It is the latter that constantly reminds us that humankind has a long way to go before it arrives at a stage of full realisation of the human essence.

The ghastly killing of Gauri Lankesh, a woman of unusual courage of conviction and clarity of purpose, has shocked society, more particularly, the world of journalism. This has happened at a stage when the standards of the journalism are strikingly on a downward trend. The presence of journalists like Gauri Lankesh was reassuring that everything had not gone wrong and kept up the hope of democratic struggle.  That she was courageous, not only in her beliefs but armed with physical courage rooted in her unshaken faith in democratic values is amazing. It is that courage that unnerved her foes. She was opposed to politics of hatred and believed such politics would eat into the very democratic, secular and socialist values that Indian people want to uphold in their long journey to build a society, equitable fair and just. A society where the voiceless will speak out, a society in which the marginalised will realise their human worth, a society where religion remains a personal belief and does not rupture social fabric with endemic hatred.

It is this world view that created enemies, the hatred of her enemies emanated from pernicious and poisonous ideology. This poison in the heart and hatred in mind led to cold blooded murders of Dr M.M. Kalburgi, Govind Pansare, Narendra Dhabolkar. This dehumanisation has reached a point beyond belief. Gauri Lankesh’s killing is all the more shocking as it is not decision of two or three individuals but an act of hatred of certain belief system. Ideological battles have been a part of argumentative India but when one is on a weak wicket, not sure of their value framework, it is that that leads to such acts of cowardice. More shocking is the reactions of sick minds celebrating inhumanity, a reminder to all of us that something seriously has gone wrong with a section of society. If such a climate spreads it can lead to Hitlerian hatred engulfing humanity. Her martyrdom should pave the way to a humane secular and democratic India. Politics of hatred should realise that her death is not its victory but a defeat of a cynical and sadist mindset.

(The writer is Visiting Professor, NLSIU, Bengaluru, and a rights activist.)