Uddhav Thackeray: The chance to come into his own

Sena playing hardball with BJP on rotational chief ministership should not surprise anyone as Uddhav might be eyeing the CM’s post for himself. 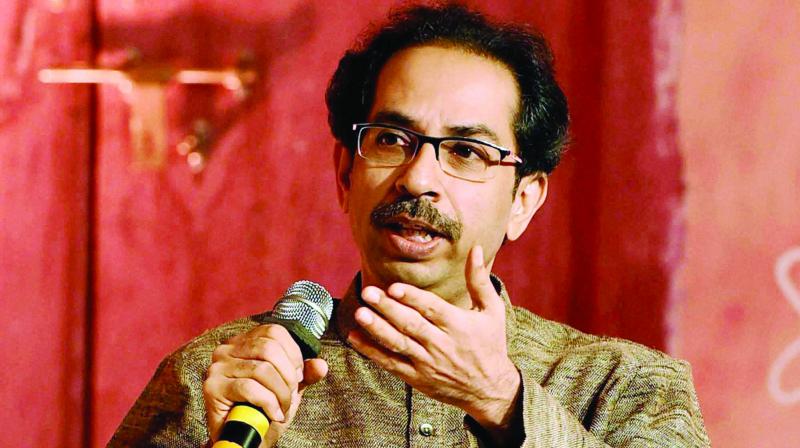 It is difficult to be Uddhav Thack-eray these days. It does not look like he and his party are going to compromise with their long term ally, recent big brother Bharatiya Janata Party. At this juncture, it is imperative to understand the Sena chief’s mind and find out whether he understands the minds of ‘Sainiks’ in particular and electorate in Maharashtra in general.

Since the 1990s, Uddhav has remained a key political player, initially in the Shiv Sena and later in state politics. But he had to face his cousin Raj — widely considered by Sainiks and public at large as Thackeray senior’s successor. However, Thackeray senior took the decision in favour of his son, leading to Raj forming the Maharashtra Navnirman Sena.

A lot of people hoped and anticipated that the Sena would collapse after the death of Thackeray senior. The fact that the party has not just survived but flourished in certain areas speak volumes about Uddhav’s leadership and managerial qualities. What he lacked in oratory has been compensated through his networking skills and creation of a new generation of leaders.

In comparison, the MNS, after a promising performance in 2009, is on the fringes of Maharashtra politics. Although the ruling Congress-NCP used the MNS to neutralise the Sena, what really demolished the Raj-led party was its untimely hobnobbing with Narendra Modi-led BJP. Probably, Uddhav doesn’t want to repeat the same mistake.

As long as Thackeray senior was alive, he was the ‘Hindu Hriday Samrat’. However, since 2014, the BJP’s deadly combination of Hindutva and development has unsettled one and all, including the Sena. Using every possible medieval jargon Sena wanted to remain the ‘big brother’ in the alliance. However, despite maintaining the façade of friendship, the Modi-Shah dispensation made serious attempts to demolish the Sena. The Sena returned the favour by following the innovative model of ‘Opposition in government’. It participated in the government and through its mouthpiece ‘Saamana’ routinely criticised the government.

Since the results were announced on October 24, the Sena has been playing hardball with the BJP on the issue on rotational chief ministership and equal sharing of portfolios. The BJP has now decided not to stake claim for the government hoping that their move may put Uddhav under tight spot. But Uddhav is unperturbed.

Another major change this time has been the arrival of Aaditya Thackeray in the legislative politics — the first from the family. Many would presume that Uddhav is playing hard ball for the political future of his son. That may be true, but that is not the only reason.

A lot of Sainiks do not trust the BJP. Whether it is on the issue of Ram Mandir or Uniform Civil Code, the consensus between the two parties has been more or less superficial. There is also a growing fear in the minds of the Opposition in Maharashtra that the BJP not only wants to win elections, but also intends to destroy Opposition parties as well as its allies like Shiv Sena. This gripping fear and the consequent retaliation are behind Uddhav’s tough stance today.

Amid the political uncertainty in Maharashtra, the alternative of a Sena-NCP government backed by the Congress from outside looks like a possibility. But the question is: Is Uddhav willing to snap ties with the BJP at the Centre?

The Sena’s  desire for the chief minister’s position could also mean that Uddhav may be eyeing the top job for himself. Given the volatile scenario right now, Uddhav seems a better choice — with wide experience in party matters — for the position. Certainly, better than Aaditya, who is inexperienced as well as a first-term MLA.

What other choices does Uddhav have? A compromise formula with the BJP  could still be an option.

During the Lok Sabha election, the BJP successfully utilised Balakot air strikes for electoral benefit. However, campaigning on the abrogation of Article 370 in the Assembly election did not help it. In fact, it backfired.

Keeping in mind the fact that the Sena would remain a regional party, Uddhav can effectively distance himself from the BJP and attempt to strengthen his party as a regional force. Much of it depends on whether he is able to keep his people together. With large scale defection to the BJP, just before the Assembly election, not helping political turncoats, it is very difficult to break any major political party, including the Sena. This provides an opportunity for Uddhav to go back to his party’s old roots — the politics of ‘Marathi Manoos’ and the Marathi language.

The politics of Hindutva and the politics of ‘Marathi Manoos’ are antithetical. Shiv Sena can’t play both. With the BJP and the Sangh Parivar monopolising the Hindutva space, it is high time that Uddhav brings his party back on track. The Sena’s tag line during the Assembly campaign was ‘Hich ti vel (this is the moment)’. That is the message for the Sena and Uddhav — if only they want to listen.

(Dr Pawar is a political commentator and teaches politics at the University of Mumbai.)