Thomas alleged that the government has brought the Bill without proper homework and demanded that the Bill should be sent to a JPC. 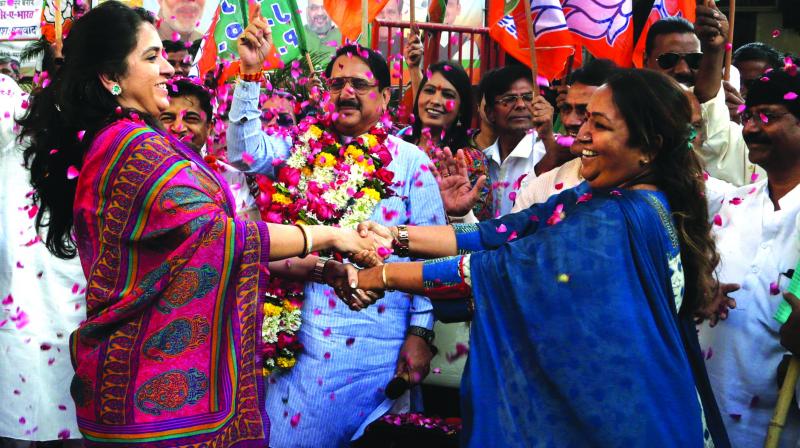 A file photo of BJP supporters celebrating the passage of the Bill for 10 per cent EWS quota in Parliament.

The 10 per cent quota for economically weaker sections (EWS) from the general category in educational institutions and government jobs came as a bolt from the blue for most Opposition parties. The Narendra Modi government which was cornered over a range of issues, including agrarian distress and lack of jobs that also contributed the ruling BJP’s loss in three key Hindi heartland states in the recent Assembly elections, suddenly spun out a political googly which was difficult for almost any party to oppose.

Thus, except a few parties like the Rashtriya Janata Dal (RJD) and the Aam Aadmi Party (AAP), almost everybody voted in favour of the Bill, albeit, making some subdued noises like asking for the legislation to be sent to a joint select committee for further scrutiny.

While in Lok Sabha three members  — Asaduddin Oaisi of the AIMIM, and E.T. Mohd Basheer and P.K. Kunjhalikutty of the Muslim League — voted against the Bill, in Rajya Sabha a total of seven members walked out during voting.

The Congress, which is the largest Opposition party in Parliament, said that though it is in favour of any legislation on reservation, it wants that no decision is taken in haste.

“Without interfering with the constitutional mandate of reservation given to dalits, adivasis and backward classes in any manner, we have always supported that those who are genuinely poor and who are not covered under these sections may also be given the benefit of opportunities and reservation, both in education and employment,” Congress chief Spokesperson Randeep Surjewala had said.

Speaking in the Lok Sabha, senior Congress leader K.V. Thomas said that his party is not against the concept of 10 per cent quota Bill and supports it, but the way it has been brought raises several questions on the sincerity of the government.

He alleged that the government has brought the Bill without proper homework and demanded that the Bill should be sent to a Joint Parliamentary Committee.

Arguing for his party strongly in the Rajya Sabha, former law minister and senior Congress leader Kapil Sibal said that there would be three hurdles that the Bill would have to pass. First, is the complete non-application of the mind on the part of the government in introducing this Bill; second, is the constitutionality of this Bill; third, is the implementation of this Bill.

Sibal also argued that the Bill will fail the test of constitutionality because the Mandal Commission provision of 10 per cent reservation for the economically weaker category was declared unconstitutional by the Supreme Court.

Citing the Indra Sawhney verdict, he stated, “If a nine-judge Bench held it unconstitutional, how can you amend the Constitution?”

Though both Samajwadi Party and the Bahujan Samaj Party welcomed the legislation, BSP chief Mayawati claimed that the government was trying to do a stunt ahead of the coming general elections.

“The BSP’s demand to provide reservation to the economically backward sections in general category is approved by the Cabinet in an immature way and without preparation. Our party, however, welcomes the decision though it appears to be an election stunt and political gimmick of the BJP ahead of Lok Sabha polls,” Ms Mayawati said in a statement.

In fact except Lalu Prasad’s RJD, almost parties of the socialist stock supported the Bill.

The RJD, which staged a walk out when the Bill was tabled in the Upper House, said that it is opposed to a binary being created between Upper Castes and Lower Castes.

RJD’s Rajya Sabha MP Manoj Jha said that the BJP should be blamed for creating any backward-forward binary. “I agree there are poor among upper castes, but their poverty does not arise out of their birth in that caste,” he said.

Sources, however, said that the RJD allies in the Opposition Grand Alliance like Rashtriya Lok Samata Party (RLSP) and the Congress are wary of the party’s stand thinking that its position will affect the electoral prospects among upper caste voters.

Asked about allies’ discomfort, Mr Jha said: “We are not concerned with that. We have taken a stand”.