Indian Muslims had rejected the Jinnah’s ideology and it was a right decision, says Owaisi. 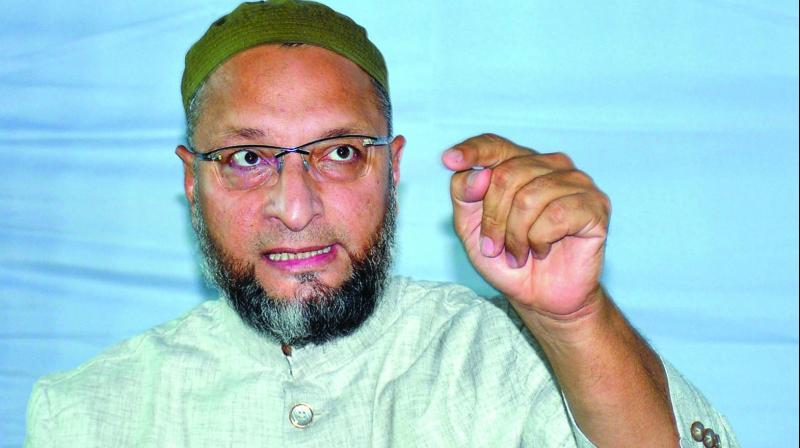 After the November 9 Supreme Court verdict giving the title of the disputed land for the construction of a temple — and ordering that Muslims be given five acres elsewhere in lieu of the demolished Babri Masjid — the Indian Muslim has been forced into introspection. One of the critical questions that now arise is why Indian Muslims have not, since Partition, had one voice to speak for them.

All India Majlis Ittehadul Muslimeen President Asaduddin Owaisi perhaps sees himself in the role of the leader of Indian Muslims. After the verdict, he outrightly asked the key question: “Are we to live in this country as second-class citizens?” Deccan Chronicle caught up with Owaisi for an indepth interview. Excerpts:

You have called the five acres offered to the Sunni Waqf Board as ‘khairaat’. What is the difference between charity and a settlement?
Our struggle was for a legal right for the sake of the mosque, not for a piece of land. Though it was a ‘Title Suit’ in nature, the main purpose was to defend the mosque’s existence. Judges have stated that the demolition was an illegal act and putting the idols was a criminal act. You admitted these things but denied our claim. When you deny our adverse position on the site, then why are you giving 5 acres of land? This is like charity. This is not a settlement. If the mosque was demolished illegally then the site should go to Muslims. If the mosque was not demolished you could deny the site. The ASI report did not certify that the mosque was built by demolishing a temple. There is no clarification that the temple existed earlier, it just talks of non-Islamic remnants.

The implication is that in future everyone may claim that his faith is associated with every particular structure. Where is an end to it? Because this was a civil suit, Court said that one community believed that Ramji was born beneath the central dome of the Babri Masjid. This means it was a victory of faith. Though there is the Places of Worships Act of 1991, no one can stop the BJP and the Sangh Parivar.

Already the VHP has said that Ayodhya jahnki hai. The 1991 Act says that the status of religious structures on August 15, 1947, will remain, but no one stops them.

You said the SC verdict brings the country further on the path of Hindu Rashtra. Elaborate.
If not so, then what are the NRC and the Citizenship Amendment Bill? They say that refugees will be given citizenship based on the indigenous religion. They are the agenda of an aggressive Hindutva ideology. Meanwhile, the economy goes down further. Unemployment increases. Agrarian crises deepen.

Is it a strategy by so-called secular parties to keep their mouths shut? Do you think the Congress has been playing the soft Hindutva card?
Yes, this is a question one must ask and I have been raising it for years. Why they are keeping their mouths shut? It is the same Congress when P.V. Narasimha Rao was Prime Minister that the Masjid was demolished. He had promised it would be reconstructed at the same place. Now the party has taken a different stand. Congress is not playing soft Hindutva, but real Hindutva. Now the Congress is ready to enter into an alliance with the Shiv Sena.

Since Independence, Indian Muslims have not had a national leader. Why did this happen?
Muslims of India always accepted the leadership of various political parties. They posed faith on Nehru, Indira Gandhi, Rajiv Gandhi, N.T. Rama Rao, Chandrababu Naidu, Lalu Prasad Yadav, Mulayam Singh Yadav, Sharad Pawar, Mayawati and others. They reposed their confidence in them, but what did they get in return? Social-economic indicators and empirical evidence show that the parties only took our votes. In the regime of Indira Gandhi massive communal riots occurred. Rajiv Gandhi unlocked Babri Masjid. Major riots took place in the Mumbai during 1992-93 after the demolition of Babri Masjid.

Why could not A.R. Antulay or Farooq Abdullah become the leader of Indian Muslims?
Congress never allowed Abdul Rahman Antulay or for that matter any Muslim leader to emerge as a national leader. No one emerged after Maulana Abul Kalam Azad in the Congress or any other party. The Congress itself does not want to promote any Muslim as a national figure. Farooq Abdullah was not a leader of even Jammu and Kashmir, but his father Sheikh Sahab (Sheikh Abdullah) was a towering personality.

Have the Masjid demolition and the verdict proved Jinnah correct in saying Muslims would become second-class citizens under Hindu rule?
Indian Muslims had rejected the Jinnah’s ideology and it was a right decision. Organisations and political parties who want to convert India into a Hindu theocratic country, that will be a great disservice to all freedom fighters or Constitution-makers like B.R. Ambedkar, who wanted India to be a pluralistic country, where its diversity would be celebrated, where people believe in Indian nationalism, not in one religion or Hindu nationalism. They promoted Indian nationalism. Now these people speak about Hindutva nationalism.

Indian society seems to have shifted to the Right. Is this the new normal?
This is the reality. The BJP increased their Hindu vote-share from 37 per cent in 2014 to 44 per cent in 2019. The BJP has no elected Muslim MP. Secular parties have completely lost ground.

Congratulations on the MIM opening its electoral account in Bihar. However, it is still said by some that by cutting into the votes of secular parties, the MIM enables the electoral dominance of the BJP. Some even say Owaisi is a BJP agent. Is it not better to work unitedly with the ‘secular’ parties?
What is the Congress’  and NCP's role? They have now become ‘vote katwas’. We had contested only three seats in Lok Sabha elections in 2019 and won two. On both, we defeated the BJP and the Shiv Sena.

In the Kishangunj Lok Sabha seat, MIM got three lakhs votes, while JD(U) secured 3.32 lakhs and Congress 3.5 lakhs votes. If we had not contested, then the JD (U) would have won.

When the Supreme Court verdict was pronounced, voices were raised. If I had not spoken they would ask “Why is Owaisi keeping quiet?”. When I speak then they brand me as anti-national. When we contest they brand our party as B-team of the BJP. Did they want us to become deaf and dumb, or like a corpse? Did they want that we should not react or use our freedom of expression?

Shall we live in this country as first-class citizens or should we live at the mercy of political parties?

Now the Congress and NCP may enter into an alliance with Shiva Sena. The only party that remains secular is mine. Who is secular now? The word ‘secular’ becomes a stick to beat MIM.