Rashid Kidwai
Rasheed Kidwai is a journalist-author, and a visiting fellow of ORF

Clearly, neither PM Narendra Modi nor BJP chief Amit Shah will shy away from a counter-offensive to regain lost ground. 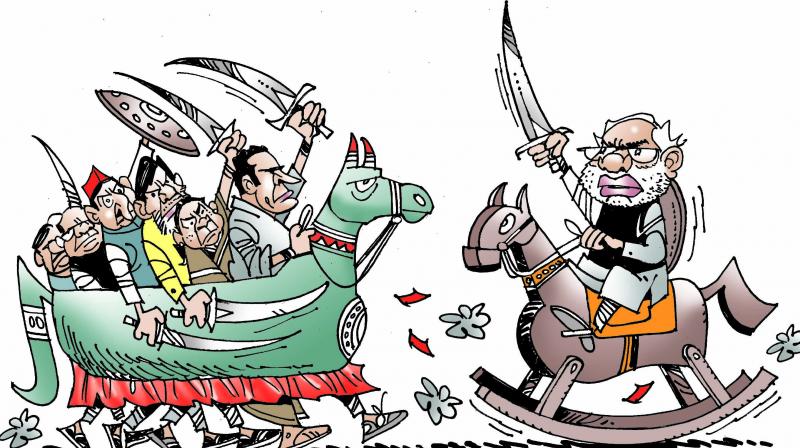 Prime Minister Narendra Modi is in the hot seat, and with every non-Congress, non-BJP leader, alienated and targeted for what is seen as acts of political vendetta, the isolation of the BJP and the coming together of a hitherto disparate opposition has been compounded by the Congress’ electoral success in Madhya Pradesh, Rajasthan and Chhattisgarh.

Until the Pulwama suicide bomb attack by a home-grown terrorist that tragically claimed the lives of 49 CRPF personnel, and has now set off a countrywide vilification of Pakistan, the fount of terror, and the deification of Prime Minister Narendra Modi as the only bulwark against the old enemy, few would have predicted the Narendra Modi-led BJP government would win a second term, let alone come back with the same kind of overwhelming majority as 2014. A much-speculated drone attack that levels the 30-odd terror training camps in PoK, could be an electoral gamechanger. Can it change ground reality? As RASHID KIDWAI reports, every pollster, until Terror Thursday, had posted a set of numbers that showed the opposition steadily gaining ground. This, despite the fact that it didn’t have one leader around whom the clutch of parties could coalesce. With the boost from the entry of a Priyanka ‘pull no punches’ Gandhi, into the electoral fray, the 2019 Lok Sabha polls is wide open. A dry run before the real contest in 2022?

In the summer of 2014, the mood of the nation against the Manmohan Singh government was palpably negative, with the then chief minister of Gujarat, fast becoming the magnet for all the anti-Congress forces, as the man who would lead India to a better future.

In February 2019, the roles have been reversed. Prime Minister Narendra Modi is in the hot seat, and with every non-Congress, non-BJP leader, alienated and targeted for what is seen as acts of political vendetta, the isolation of the BJP and the coming together of a hitherto disparate opposition has been compounded by the Congress’ electoral success in Madhya Pradesh, Rajasthan and Chhattisgarh. This has made the contest for 17th Lok Sabha in May 2019 far more open than expected. The entry of Priyanka Gandhi as Congress general secretary, the Congress’ promise of a uniform income guarantee, and the groundswell of doubt on the exact role played by the prime minister in securing the Rafale deal roils it further.

Pollsters and opinion poll agencies are divided. The ABP-CSDS Mood Of The Nation 2019 survey found there are more people who believe that the Modi-led NDA does not merit a second chance to form the government post-2019 Lok Sabha elections than those who think it does. Another survey conducted by ABP News-C Voter poll predicts that Narendra Modi led NDA would win 233 seats, while the Congress-led UPA would secure 167.

The Grand Old Party’s systematic state-wise alliances as it sheds its old, nose-in-the-air, high-handed, big brotherly approach is evident in the way Rahul Gandhi landed at a meeting of opposition leaders held at Nationalist Congress Party Sharad Pawar’s residence where the West Bengal Chief Minister and Trinamul Congress leader Mamata Banerjee is said to have urged the Congress chief to work out seat adjustment with the Aam Aadmi Party in Delhi. The issue hanging fire is whether Arvind Kejriwal’s AAP would contest five out of seven parliamentary seats from the national capital or four, leaving three for the Congress. But the big picture is of opposition parties shedding their differences over a common goal.

Clearly, neither PM Narendra Modi nor BJP chief Amit Shah will shy away from a counter-offensive to regain lost ground. If the BJP is eyeing former president Pranab Mukherjee’s daughter Sharmistha, the Congress has brought back Avtaar Singh Bhadana, an influential Gujjar leader of western Uttar Pradesh, Delhi and Haryana.

Read: Can Modi's charisma hold fast at 17 in Karnataka?

There is a strong likelihood of Congress having strategic tie-ups with small but significant players in Uttar Pradesh such as the Nishad Party, Apna Dal, Mahan Dal,  Suheldeo Bhartiya Samaj Party (SBSP), Peace Party and others. Congress managers are aware that Kurmis, Koeris, Lodhs, Jats,  Sunars and among many non-Yadav OBC voters, account for over twice the Yadav population in UP. Similarly, there are many non-Jatav voters among dalits such as Pasi, Valmiki, Kahar, Kashyap, Kewat, Nishad, Bind, Bhar, Prajapati, Rajbhar, Batham, Gauriya, Turha, Majhi, Mallah, Kumhar, Dheemar, Dheewar and Machhuas. Individually, each may hold a small vote share but together, they make up a significant chunk of votes. Purely in terms of numbers, OBCs in UP are estimated to be around 44 per cent of population, while Dalits are approximately 21 per cent, Muslims 19 per cent, and upper castes 16 per cent.

A strong Congress under Priyanka Gandhi’s leadership is a bad news for BJP in Uttar Pradesh. The Congress vote bank (for whatever its worth) is such that it has much more capability to hurt the BJP than a BSP-SP combine. The 2009 Lok Sabha results tell their own story.

The Congress, in spite of not having a well-oiled organisational or election machinery, had bagged 21, while BSP tally was 20 and SP, 23. RLD got five, while the BJP was down to ten parliamentary seats. Going by survey findings of C-voters and CSDS, 2019 has a real possibility of BSP-SP combine repeating its 2009 performance. It is therefore for the Congress to make a dent in BJP’s projected tally of 30-odd seats. Internally, the Congress has been wary of seat-adjustment in UP fearing that the BSP-SP combine would stake claim on a few seats of Madhya Pradesh, Punjab, Rajasthan and Maharashtra. These seats, numbering around a dozen, would have deprived the Congress from increasing its parliamentary tally much more in proportion, than its conceivable success in Uttar Pradesh.

But for the Congress – and its newly verbose president Rahul Gandhi – to fashion an anti-BJP mahagathbandan that can win the confidence of the people, and challenge the sheer force of   Narendra Modi’s personality, there are numerous ghosts that must be laid to rest. First, will the grand alliance, as and when it comes through, centre around one personality? Will it be a national-level accord or a seat sharing adjustment, a tacit understanding, spread across 29 states? The stark difference of opinion among the top protagonists, from Rahul to Mayawati, Mamata Banerjee, Laloo Prasad Yadav, Sitaram Yechury to the likes of M.K. Stalin, Chandrababu Naidu and the rest, gives rise to disquiet on what form a government that has all of them in it, will take. And crucially, will it splinter and see elements within the Mahaga thbandan i.e. Mulayam Singh, Ajit Singh and Sharad Pawar – being drawn into the NDA’s ambit if Modi-Shah’s BJP gets restricted to less than 200 seats?