In search of a leader

The formation of Pakistan took with it the leaders of the Muslim League. With them went the wealth of leadership acumen. 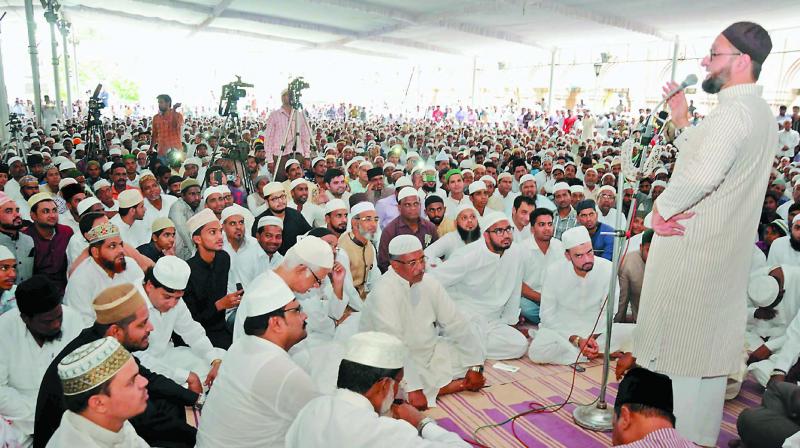 All India Majlis Ittehadul Muslimeen President, Asaduddin Owaisi, sees himself in the role of the leader of Indian Muslims.

Despite being 200 million strong, Muslims in the country do not have a common platform, a common face or a common leader who can represent them in their time of crisis.  It is important that this vacuum must be filled.

The Muslim community in India is in turmoil. In the last 150 days they have been systematically targeted by government policies and resolutions. Yet there is no leader who can channelise and bring to light their deep sense of betrayal.

Insecure and unsure but resilient, they have maintained a brave front with a “social silence” on the Ayodhya verdict, the triple talaq law, the National Register of Citizens (NRC) and Citizenship Amendment Bill, and the emasculation of Article 370. Yet it shows only a shade of the level of their tolerance.

Despite a fire within, Muslims feel an inability to express themselves. A vacuum in social and political forums exists like never before. Their despair and anger cannot be conveyed to the government because of the limitations of Constitutional rights. Despite being 200 million strong, they do not have a common platform, a common face or a common leader who can represent them in their time of crisis,

Why are Muslims leaderless? What has led to this vacuum?

History of submission
The answer lies partly in the pre-Independence era where different communities worked towards special and separate interests to safeguard their religious rights. During the British rule, the community’s first priority was to safeguard communal rights, job reservations, separate legislatures and separate electorates. Then came the fight against British rule. The Muslim League and the Hindu Mahasabha are examples that show that they worked towards claiming the legitimate rights of Muslims and Hindus first, and only then did the agenda come to Hindu-Muslim unity, and then the Indian Nation.

It was Hindu-Muslim unity that the British successfully sought to disrupt. But responsibility or blame are not the British’s alone.

Two ideologies developed in India: nationalism and communalism. Nationalism was a new consciousness to fight against the British. Communalism was based on the interests of a religious community.

“Feelings of extreme communalism began in 1937,” says Professor Salma Ahmed Farooqui, of the H.K. Sherwani Centre for Deccan Studies at the Maulana Azad National Urdu University. “Socio-political organisations like the Muslim League, the Hindu Mahasabha and the Rashtriya Swayamsevak Sangh took hold. There were two types of Muslims that emerged in India. One set were nationalist Muslims fighting against British rule and another were Muslims who supported British rule. Their fight is an important element of India’s freedom struggle. It is a reason that a situation developed where effective Muslim leadership could not emerge.” The turning point came with the Khilafat movement and the Non-cooperation Movement of 1919-1920 where prominent Muslim leaders like Maulana Muhammed Ali Jauhar, Shaukat Ali, Maulana Abul Kalam Azad and Shibli Numani condemned secularization in Turkey. Indian Muslim sentiment was aligned with that in Turkey. It was the first time that undivided Indian Muslims came together against the British. But for leadership they had looked to the Ottoman Caliph. They had not developed the confidence to independently charge of the political situation and lead.

Dependent on others to lead
The formation of Pakistan took with it the leaders of the Muslim League. With them went the wealth of leadership acumen. Those left behind were nationalist Muslims who were not only against the British but also against Pakistan. They were scattered around India. Their language, traditions and culture were those of the region they belonged to. For instance, the socio-economic status or aspirations of Muslims from Kerala and from Kashmir differ. The lifestyle and thought-process of Muslims in Assam and in Gujarat or Maharashtra differ. Regional differences were, and still are, a barrier in their ability to follow a common leader.

“The leaders with Muslim names are in political parties but have donned the role of being party stooges,” Farooq Abdul Gaffar Bawani, a retired government servant and scholar from Rajkot, says. “They only approach the community when they need political support, but when it comes to standing for the community’s issues they are nowhere. This has been the problem since Independence. Also, certain sects among Muslims openly patronise political parties, creating conflict and deep distrust within the community. How can one have a leader when there is large-scale distrust?”

Failure to find common ground
With 73 sects of Muslims, religious scholars, the ulema, the jamaats and various religious bodies have worked towards strengthening their organisations but at the cost of bringing Muslims on one platform. Notably, on the triple talaq issue, religious scholars made statements and showed dissent, but when it came to Article 370, the NRC, and the Ayodhya judgment, they did not utter a word. The few voices that did make an effort were silenced by police arrests. But in the larger public domain, there was no word.

“There is a common ground of issues like cleanliness, unemployment, education and health on which all sects can come together,” Abdul Hafiz Lakhani, general secretary of the All India Milli Council of Gujarat, said. “But the problem is that none of the sect leaders wants to talk about it openly. Whatever is talked about is done so at the local level because they do not want their leadership in their sect to be challenged.”

The biggest pressure on all sects comes from the youth and from women, who are keen for reform. It is evident in the demands of Muslim women across sects. A recent gathering of jamaats discussed the demands of young urban Muslim women, who were unwilling to settle for marriage to uneducated, low-income and dependent men. This forced the clergy to address the problem. The changing situation is bringing these two groups to the forefront as they are the backbone of the community.

Educated but unwilling to lead
Those who are educated and have the caliber and energy to lead have been sidelined in the past. They are still victim to those “leaders” who use base and opportunist tactics. Is there no one who can bring Muslims together on one platform to lead?

“We have young people who can write, articulate, speak and present very well,” says Tinat Atifa Masood, socio-political activist, poet and blogger. “It is high time they are motivated and guided by elders towards a platform. It is important as this vacuum must be filled. The time has come to create a group of leaders who will reach out to all stakeholders on a common ground. Indian Muslims have lost trust in all political parties.”

Reason and debate within the community over having a new leader has gathered momentum. The present atmosphere of fear has many of them worrying about future generations. How will they survive in this country if their rights are not protected? A need for a common ground on social and political causes is felt like never before.

Will the sectarianism make way for a common social and political leadership? Will there be a united effort for a common ground to allow budding leaders to emerge?

“Our charity work comprises people from different sects where we concentrate only on the work,” Association of Muslim Professionals member Aamir Edresy says. “This model has been successful in that people have come together. We need similar platforms for interaction to do away with the differences our religious practices. We owe it to future generations in India to fight the fear-mongers and assert our constitutional rights.”