One nation, one poll: Simplistic solutions not always the best

Early indications are that most opposition parties are sceptical but some stray voices, including in the Congress have been more receptive. 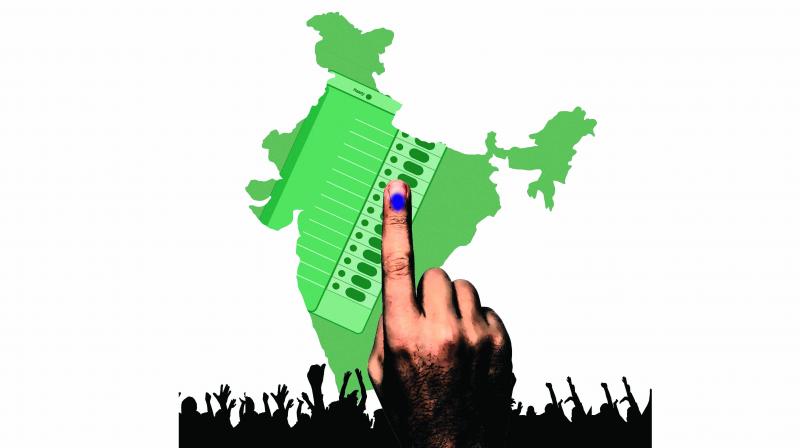 There is another whisper in the corridors of power reviving thinking about the Presidential form of government.

PM Modi's philosophy of oneness and uniformity might have its roots in deep ideology but our understanding of India is somewhat more complex. India is a remarkable model of pluralism, rich in diversity. Indeed our diversity has been our unique strength and celebrated for its contribution to our self esteem. Given that backdrop one should approach the 'One Nation,one poll' carefully and thoughtfully. Like many of the government's proposals there is a sense that people's intuitions are the best prop for innovation and intended change. An informed and objective decision is therefore called for.

Early indications are that most opposition parties are sceptical but some stray voices, including in the Congress have been more receptive.

A concern that most serious students of governance have periodically expressed is about the unending cycle of elections in the country that have an adverse impact on routine governance as indeed on the unimpeded flow of development endeavour. Unbridled populism and pre-election sops are becoming endemic on the electoral landscape causing unacceptable distortions in democratic conduct and causing negative impact to the economy.

But the question will remain whether a single nationwide election will satisfactorily address these concerns or exacerbate them.

There is another whisper in the corridors of power reviving thinking about the Presidential form of government. Indeed many observers venture to suggest that 2014 and more so, 2019, were in effect Presidential style campaigns and elections with consequential results. Many people committed to parliamentary style politics worry about any move towards Presidential form of government and believe that the latter will seriously affect the spirit of inclusion that the parliamentary system allows and encourages.

Of course  it is no one's case that the present system is perfect and does not require any reform. Many of the reforms that we have seen in recent times have come at the behest of the Supreme Court and through its far reaching judgements. Unfortunately voter education has not kept pace with the changes in the law brought about by judicial initiative. And any move towards One Election too must come with considerable voter education so as to allow for informed choice. For people, seriously concerned, it might be more important to examine the viability and usefulness of proportionate representation and the list system because that might address many problems of the present system including the constant cycle of elections in the country.

As is clear the idea of One Election is still at a preliminary stage and it will have to be fleshed out for public debate. Some procedural Constitutional amendments will be necessary  but in addition the Cabinet form of government will require a complete overhaul. That in itself will impact the structure of the executive wing as it is structured today and possibly lead to gaps in the communication links that are taken for granted in the present system.

In the consequential changes that will be necessary, it is to be worked out what must be done if an incumbent government loses the confidence of the House. In the normal course there are three options available: another group claiming to have majority and willing to prove it on the floor of the House; Governor's rule (but that is a temporary arrangement till a representative government can be sworn in or it becomes clear that fresh elections are to be held); notification of fresh elections.

Under One Election, two options will be virtually obliterated and Governor's rule is all that will be available. But that is for the States.

A similar development in Parliament will not have the second option and if the election date fixed is some time away, the government will have to continue after losing majority. It seems that the proposed new system might solve a few problems and add many more. Disappointed with the unmanageable outcomes and the chaotic conditions that might surface, there will be no fallback except to switch to the Presidential system. We must not forget that the Presidential system, as indeed any system comes with checks and balances, not all in the shape of law but also in terms of political attitudes and aspirations of the people. Without checks and balances, such as we are accustomed to in the present arrangement, we may drift to an unwholesome situation not unfamiliar in the world.

This is a not an agnostic view of electoral reform but a mere word of caution. The country has been through some trying moments because of dramatic decisions such as demonetization and premature implementation of GST. We have not entirely  overcome the adverse impact of those decisions although electoral approvals seems to have ignored that.

Yet, it is always the last straw that breaks the camel's back. Perhaps the panel that will examine the proposal will provide the opportunity for extensive debate and consultation. We should approach the camel with an open mind but mindful of the challenges these proposals pose.

(Salman Khurshid is an eminent lawyer, former minister and a senior member of the Congress party)

Tags: one nation one poll